Pietinen Aarne Oy
Lead text
In the days of old, men would dress up in horned goat costumes and roam the city while servant girls would set the tables of the bourgeoisie with lutefisk, barley porridge and Christmas beer. Christmas trees, Christmas cards and Christmas flowers were introduced in the 1800s. Christmas in Helsinki these days is an intriguing mix of old and new traditions. 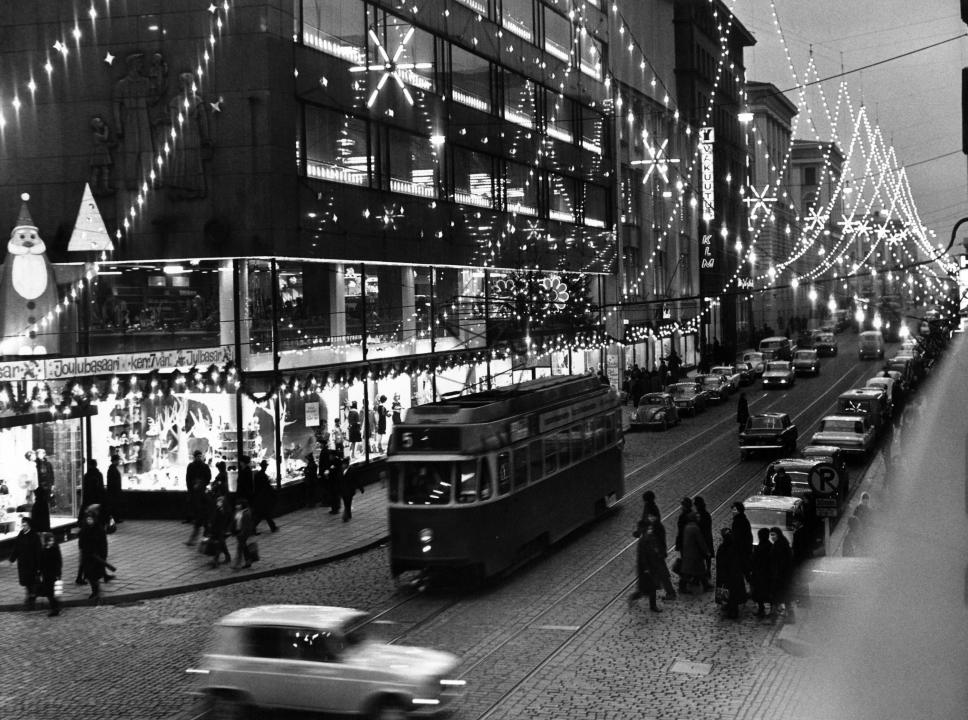 Unto Laitila
Show in landscape format
Off 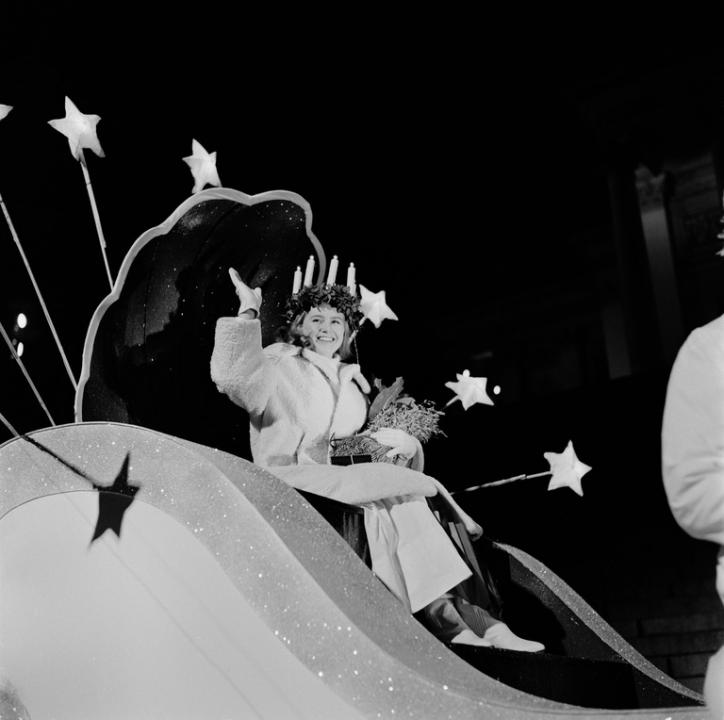 The tradition of the Lucia Maiden was introduced to main Swedish-speaking homes in Helsinki in the late 1800s. The tradition came from Sweden, and the idea is that the Lucia Maiden brings light to the darkness of winter. An official Lucia Maiden for all of Finland has been chosen each year since 1949. Dressed in white with a red built and crown of candles, the Lucia is crowned at Helsinki Cathedral on 13 December. She then descends the steps of the cathedral accompanied by Christmas elves, and together they parade around the city centre. 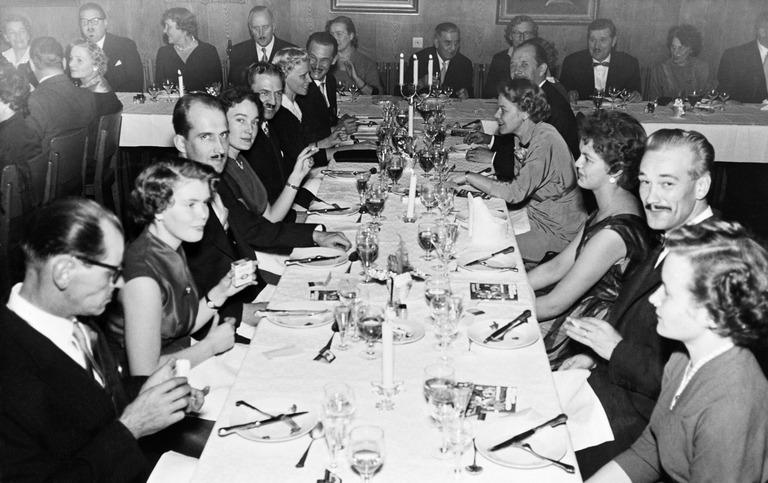 Finnish schools began holding Christmas tree parties in the late 1900s. University students then began organising porridge parties in the early 1900s. The idea of having pre-Christmas parties (“pikkujoulut” in Finnish, which literally translates as “Little Christmas”) then spread to other organisations and workplaces. Traditionally, the parties were held on the eve of the first Advent Sunday, but these days the party season lasts over a month! 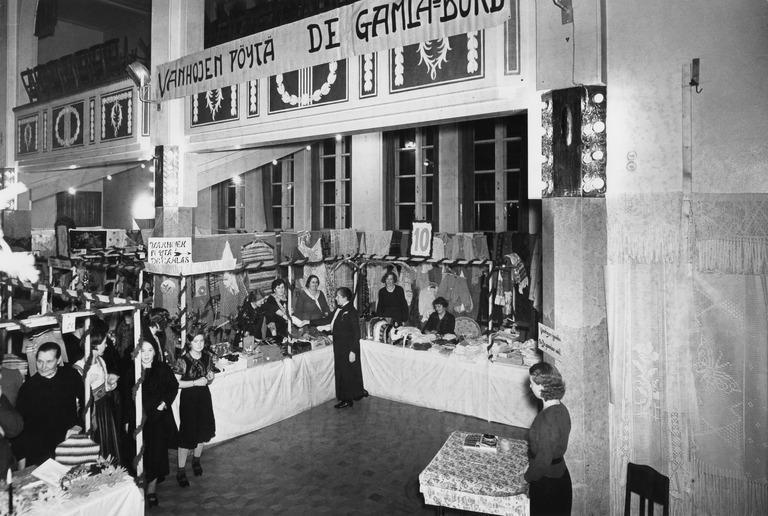 Helsinki in December is full of Christmas markets and school bazaars. These were originally organised in the late 1800s and early 1900s to raise funds for various organisations and for charity. These days the biggest such event is the Helsinki Christmas Market (“Tuomaan markkinat”, literally “St. Thomas Market”), which fills Senate Square with stalls selling handicrafts and mulled wine (“glögi”). There is also a free carousel for kids! 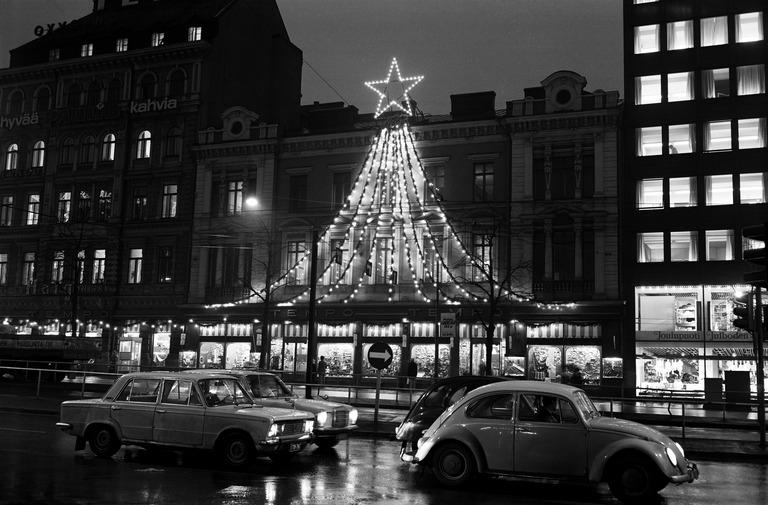 For centuries, candles have been used to light up the dark winter. The American tradition of hanging up Christmas lights on buildings and in gardens arrived in Finland in the 1990s. In recent years a new tradition has arisen in Helsinki, as locals have begun decorating entire apartment buildings with matching Christmas lights. Keep your eyes open for giant illuminated advent calendars! 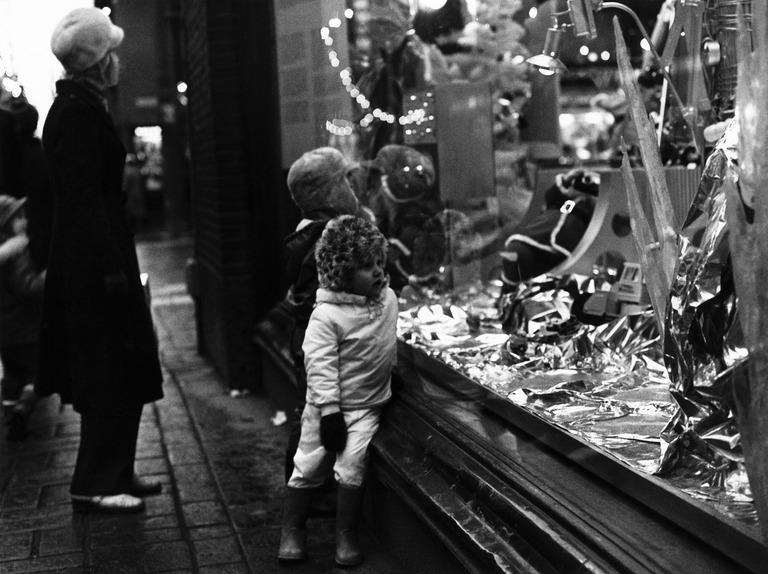 Already in the 1850s local merchants created attractive displays in their stores to promote their goods during the Christmas season. Window displays began to appear in the late 1800s. The most famous Christmas window display in Helsinki is that of the Stockmann’s department store, which has traditionally been unveiled since 1949 on the same day that the Christmas lights along Aleksanterinkatu are turned on. 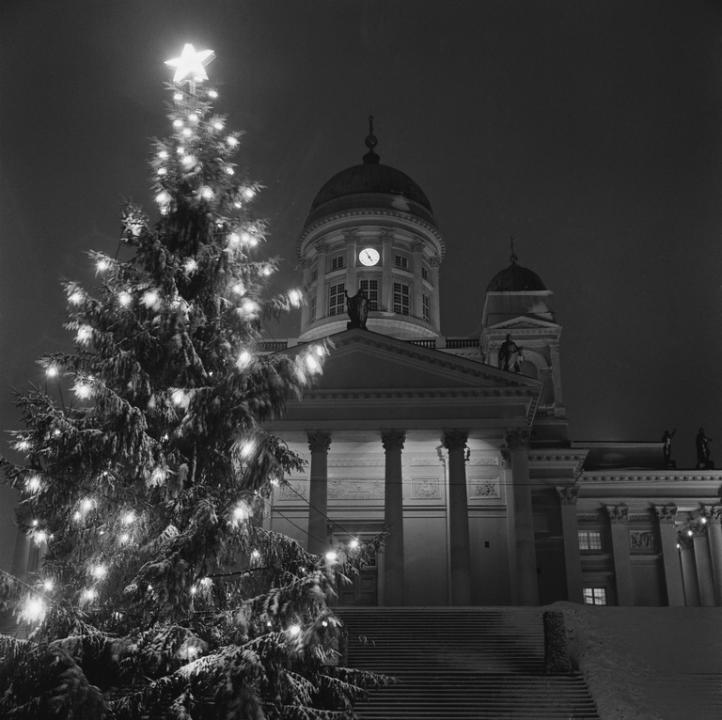 Christmas hymns and carols are an important part of the festive season. A lot of Christmas music was composed in the 1800s and 1900s. In addition to all the usual Christmas tunes that are known around the world, Finns have many of their own beloved Christmas songs. “The Most Beautiful Christmas Carols” (Kauneimmat joululaulut) is a series of concerts organised by the Evangelical Lutheran Church of Finland that attracts around a million Finns a year to sing in their local churches, restaurants, shopping centres and schools. Naturally, Helsinki’s churches also fill up with singers from the first Advent Sunday onwards. 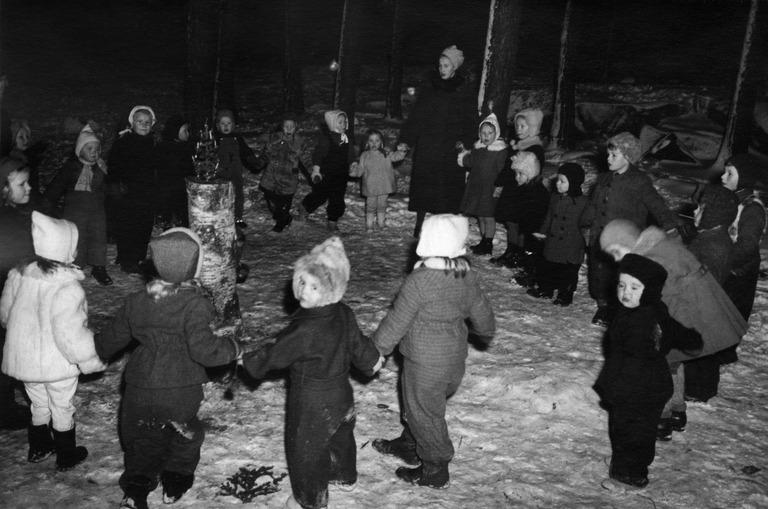 Christmas for kids has always meant enjoying the outdoors. Christmas paths are free-of-charge family events that offers visitors the chance to enjoy seasonal activities in the fresh air. Christmas paths can be found throughout Helsinki. 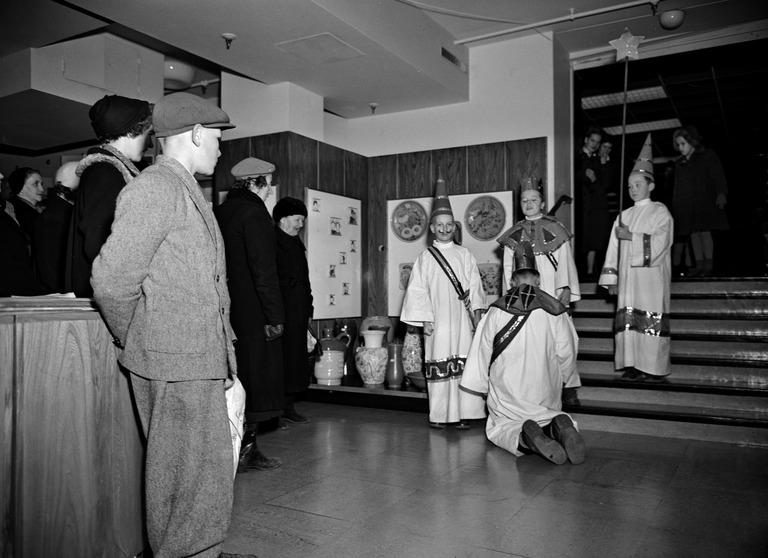 For centuries school boys have collected money by singing Christmas carols. Among the most popular performances was a musical play depicting the Star of Bethlehem and the Three Wise Men that arrived in Finland in the 1700s. Referred to in Finnish as “Tiernapojat”, these plays are still performed by school children throughout Finland. In addition to traditional versions, jazz and rock variations are also performed these days. 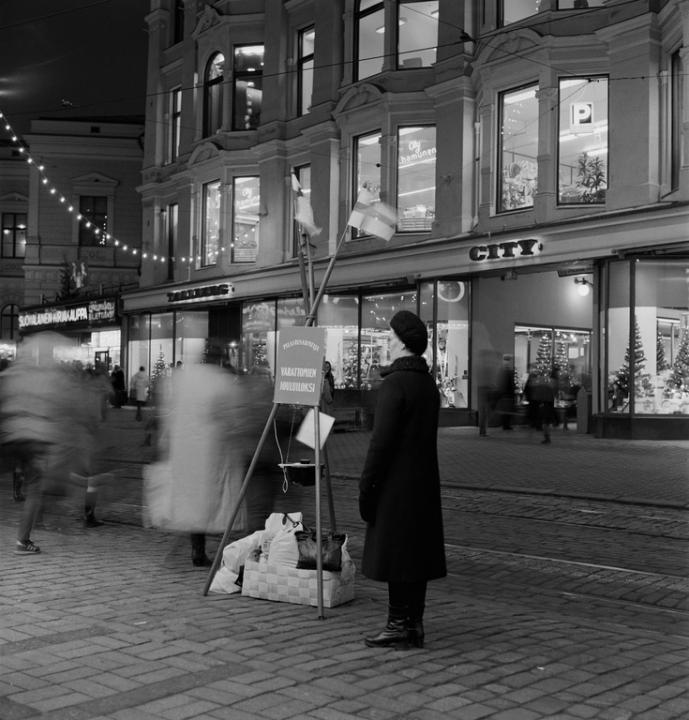 The Christmas collection kettles of the Salvation Army appear in Helsinki each year around the middle of December. These collections have been organised in Finland since 1906. 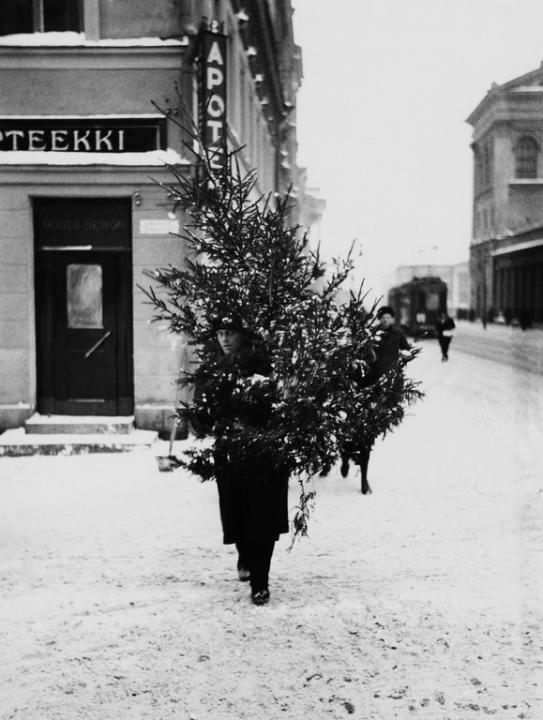 Christmas trees were introduced in Helsinki in the 1820s. Initially the trees were small and had few decorations, but over the years they have grown in size, the amount of decorations used has increased, and the tradition has spread to almost all homes. Vendors selling Christmas trees appear in the city in December, with sales increasing steadily as Christmas Eve approaches. Many families have a tradition of selecting their Christmas tree together and carrying it home. The City of Helsinki has erected a Christmas tree in Senate Square since 1930. 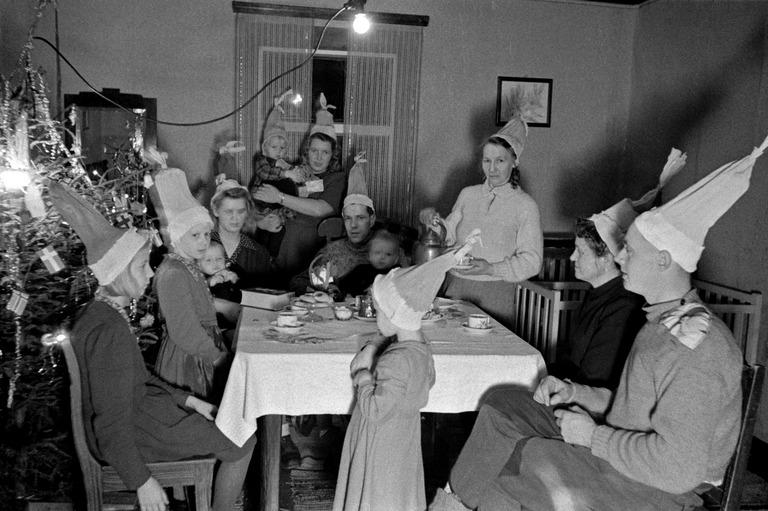 Helsinki is silent at Christmas. Christmas Eve is a very peaceful celebration that is usually spent at home among family. In the past Christmas was celebrated over many days and among many relatives, many of whom travelled from far away to join in the festivities. The programme includes a hot sauna and traditional Christmas meal, as well as games and Christmas music. The highlight of the evening is a visit by Santa Claus and the handing out and opening of presents. Many families also visit the cemetery and attend church on Christmas Eve. In recent decades the Christmas silence in the city has begun to lift, and more and more people can be seen in town. Some restaurants and other services are also open throughout Christmas. 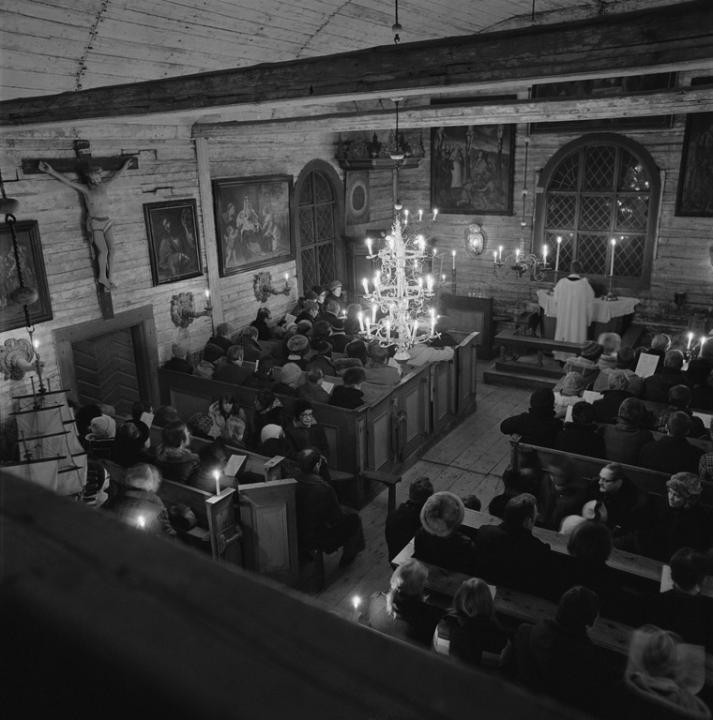 Christmas is the most popular church holiday in Finland. Most Finns look forward to the peace and quiet after the mad rush leading up to Christmas. Visiting the cemetery and lighting a candle by the graves of relatives is an important tradition for many Finns at Christmas. Church services are held on Christmas Eve in churches and even cemetery chapels throughout Helsinki, the first ones starting around midday. Midnight services are also held in many churches. The Kamppi Chapel of Silence is also open for quiet contemplation. 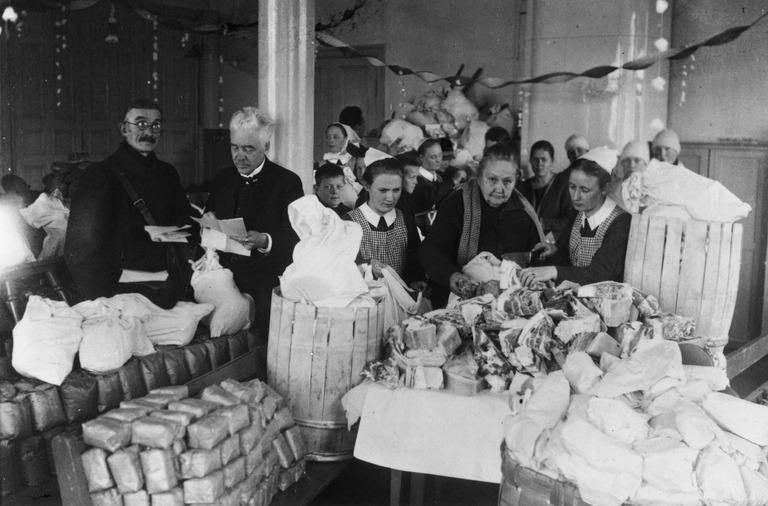 Christmas meals for those in need

Charity work is part of the Christmas spirit also in Helsinki. A Christian charity that carries the name of its founder, Veikko Hursti, distributes food and clothing to the needy throughout the year, and on Christmas Eve it organises a celebration that is open to all and includes a Christmas meal, socialising, music and a warm-hearted programme. Participants are also given a bag of Christmas food to take home with them when they leave. The charity event takes place at Messukeskus in Helsinki and involves around a hundred volunteers and over a thousand participants. 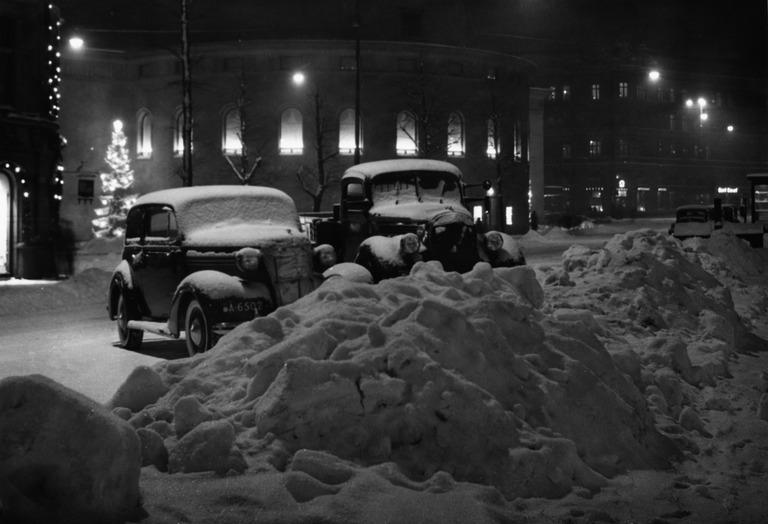 There’s nothing quite like a white Christmas. Unfortunately, Helsinki does not always get snow for Christmas. This is not a new phenomenon, but each year there is still much speculation as to whether Christmas will be dark or white this year. 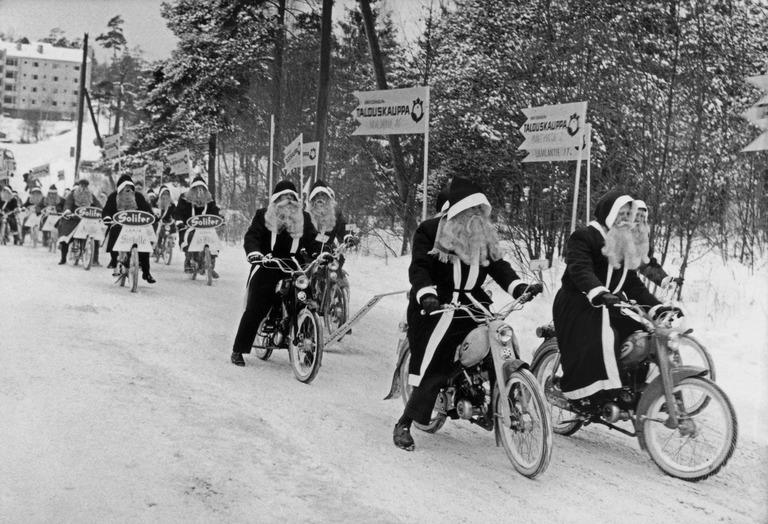 Once upon a time, young men would dress up like Santa Claus, or rather the “Yule Goat” (“Joulupukki” in Finnish), and go from door to door demanding gifts and leftovers from the Yule feast. These Yule Goats wore masks of birch bark, horns on their heads and animal skins on their backs. In Helsinki these rather frightening figures were tamed in the 1830s, and they began to wear simple grey cloaks and bring gifts for children. Red-jacketed Santa Clauses began to appear in the first half of the 20th century and replaced the grey-cloaked figures by the 1960s and 1970s. These days in Helsinki you might even come across a Santa Claus dressed up like Superman and swinging a lasso! 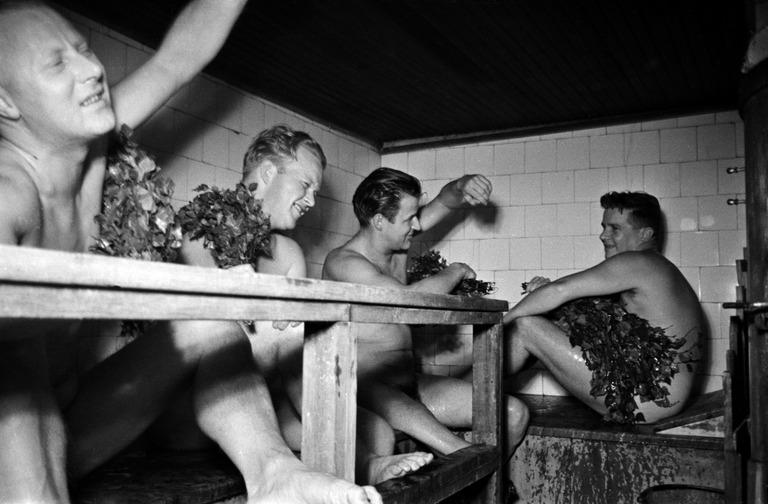 The Christmas sauna is a deeply embedded Finnish tradition. The idea was to relax and clean up before the celebrations on Christmas Eve. Finns have many folk beliefs connected with the sauna, such as appeasing the sauna elves by leaving them a bucket of water, a birch whisk and a glass of beer. These days Christmas saunas are enjoyed not only on Christmas Eve among family but also during the pre-Christmas season with friends. In addition to all the public saunas in Helsinki, in recent years there has also been a Christmas sauna in the Tori Quarter in the historical centre of Helsinki, this year in the Senate square. 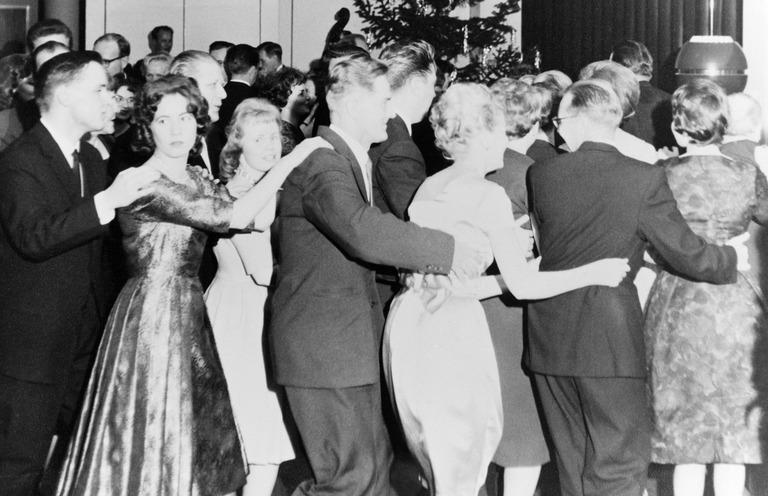 The quiet family-oriented Christmas celebrations traditionally end on Boxing Day. In the countryside, the day after Christmas was usually spent enjoying sleighrides, visiting friends, having parties and even dancing. These days Helsinki too comes back to life by the evening of Boxing Day at the latest. Many restaurants host traditional Boxing Day dances, and cinemas are packed with people happy to get out of the house!

Simple liftup
Helsinki’s annual rhythms: Winter
Show image on the left
Off
Show created/updated
Off
Show in search dropdown
Off
Teaser text
In the days of old, men would dress up in horned goat costumes and roam the city while servant girls would set the tables of the bourgeoisie with lutefisk, barley porridge and Christmas beer. Christmas in Helsinki these days is an intriguing mix of old and new traditions.
Select any filter and click on Apply to see results