Most beautiful churches in Helsinki

Jussi Hellsten
Lead text
Helsinki has many beautiful churches where you can meditate and attend a variety of events. They are also popular among architecture fans, who can admire the wide range of styles – from classical to ultra-modern. For a complete cultural experience admire these feats of architecture from inside as well as outside.

Most of Finland's population belongs to the Christian faith thus there is no dearth of gorgeous churches, especially in Helsinki. There are numerous lovely places of worship in Helsinki where you can easily spend a long time just sitting and pondering while the world goes by.

These sights are definitely not restricted to worship alone but they serve as lovely tourist attractions too and are additionally prominent among architecture fans, who can respect the extensive variety of styles found on different corners of the city. If you’re interested in architecture or photography or simply seeking peace, these churches will not disappoint you.

This white wooden church in a small park in the city centre was designed in the Empire style by Carl Ludvig Engel. Originally planned as a temporary building, the church was completed a week before Christmas in 1826, making it the oldest existing church in Helsinki.

The pulpit dates back to 1726 and is from the Ulrika Eleanora Church, the original wooden church in Senate Square. The altarpiece was painted by Robert Wilhelm Ekman. The Old Church was used by high society for wedding ceremonies in the 1860s, and it continues to be one of the most popular wedding churches in Helsinki.

The church is situated in a small park that served as a cemetery even before construction began. The park is sometimes referred to among locals as the “Plague Park”, a reference to the over one thousand victims who were buried there in the early 1700s. Over 40 graves and monuments of Helsinki families can still be found in the park. These days the Old Church Park is a popular place for picnics and relaxing in summertime.

Suomenlinna is a UNESCO World Heritage Site and central to Helsinki’s maritime identity, which is considered one of Finland’s national landscapes. Suomenlinna Church is a major landmark on Helsinki’s southern horizon.

The church was designed by Konstantin Thon and completed in 1854 for the Russian garrison on what was then known as Viapori island. After Finland gained independence, it was converted into an Evangelical Lutheran church. The appearance of the church was changed accordingly and its five original onion domes removed. The tower was also given a square appearance, and the exterior walls were plastered smooth. The biggest changes were made according to the designs of architect Einar Sjöström from 1927 to 1929.

The central dome still houses a lighthouse that is used for air traffic and shipping. The four short signal blinks are Morse code for the letter "H" for Helsinki. 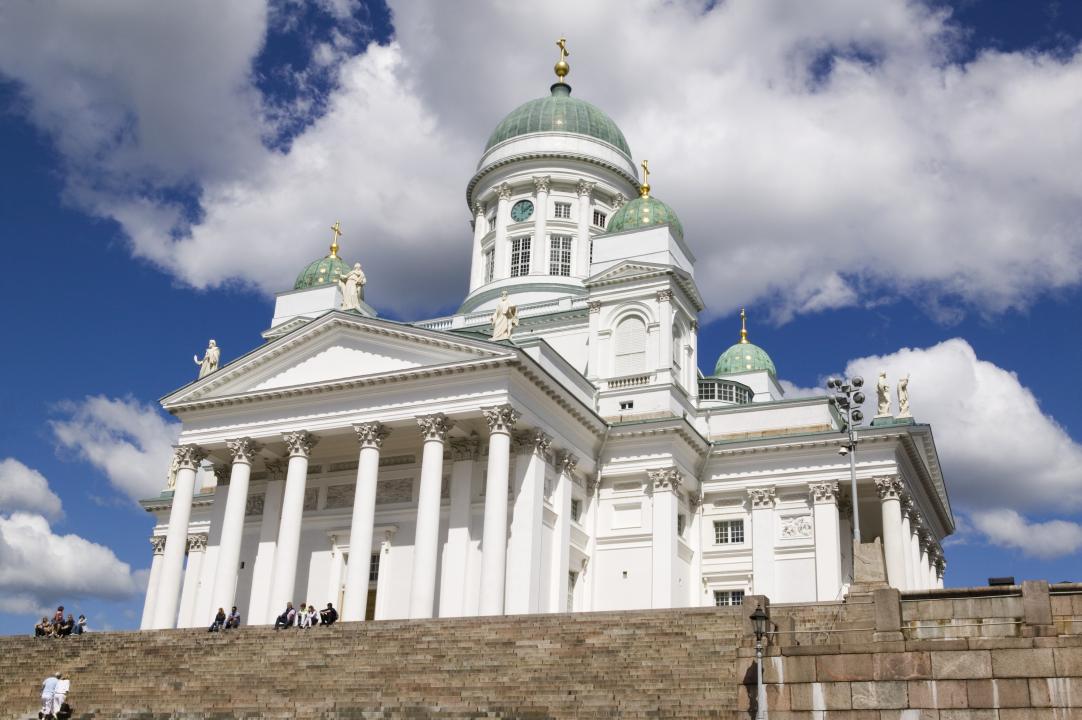 The white cathedral that overlooks Helsinki has become a symbol of the nation’s capital and one of the two national shrines together with Turku Cathedral that is used for special occasions by the state and university. Helsinki Cathedral was designed by Carl Ludvig Engel and completed in 1839.

Helsinki Cathedral was built in the neoclassical style and its plan is a Greek cross with four equilateral arms. The dome reaches a height of 62 metres and it is surrounded by four smaller domes and zinc statues of the Twelve Apostles at the apexes and corners of the roofline. The white interior of the cathedral is very minimalistic. The altarpiece was painted by Timofej Adrejevits Neff from St. Petersburg.

The cathedral is used for state and university ceremonies. The steps leading up to the cathedral are used as both a stage and seating for events held in Senate Square. Helsinki Cathedral and Senate Square are among the most recognisable sights in Helsinki.

Approaching Helsinki from the sea, the skyline is dominated by the white Lutheran Helsinki Cathedral and the redbrick Uspenski Cathedral, the largest Orthodox cathedral in Western Europe.

Constructed in 1868 on a massive granite rock at the start of the Katajanokka peninsula, Uspenski Cathedral features elements of old Russian wooden churches, as well as later Byzantine and Russian medieval cathedrals. The interior is spacious, and the roof is supported by four massive pillars carved out of a single granite block. The ceiling is adorned by a painting of the night sky. Nearly all the interior surfaces, vaulting and base of the domes are covered by Byzantine ornaments and icons. There is an iconostasis at the front of the cathedral and an altar at the rear.

There are no benches inside the cathedral, but there are a few seats along the sides.

This twin-steepled redbrick church is a landmark in the continental Ullanlinna district. The church was designed by Swedish architect Adolf Emil Melander and constructed between 1888 and 1891.

St. John’s Church is a prime example of late Neo-Gothic architecture in Finland. The twin towers are 74 metres high. Melander himself designed the church benches, the pulpit, the altarpiece and the baptism table. The interior is very ornamental with stained glass bow windows, hymn boards and chandeliers. The altar painting was painted by Eero Järnefelt in 1932.

The church overlooks a park with lawns, a playground and a sports field that is used for ice skating in wintertime. 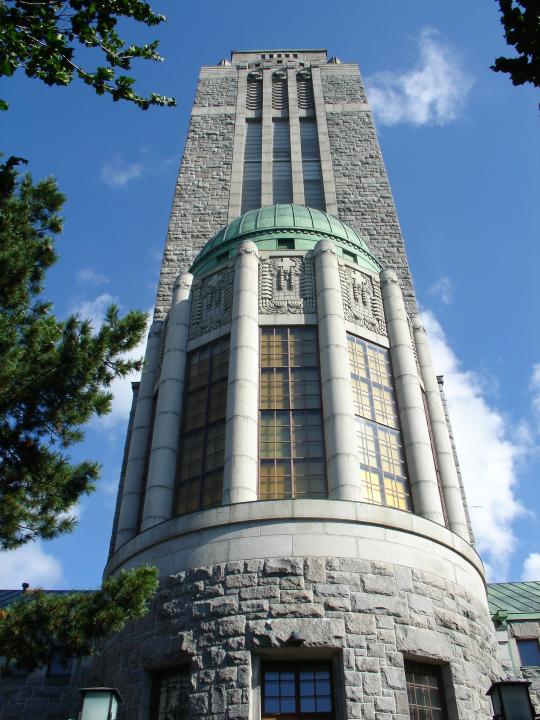 Perched on top of a hill overlooking Kallio is the grey granite Kallio Church designed by Lars Sonck and constructed between 1908 and 1912. The church was built in the National Romantic style combined with Art Nouveau influences.

The layout of the church is in the form of a Latin cross, and it surrounded by park-like grounds with steps and terraces. The church is one of the main landmarks in Helsinki, its 65-metre tower reaching 94 metres above sea level. The tower has seven church bells that play a chorale composed especially for the church by Jean Sibelius in 1911. The chorale is played daily at 12noon and 6pm.

The altarpiece is a crucifix and wooden relief carved by sculptor Hannes Autere in 1956. The massive brass lamps were designed by Paavo Tynell in 1932.

Karuna Church is a traditional wooden church from the municipality of Karuna in Southwest Finland that was constructed in 1685 and transported to the open-air museum on the recreational island of Seurasaari in 1912. It is the oldest and most recognisable building in the collection of wooden buildings at the open-air museum.

The church was commissioned by Arvid Horn af Åminne, owner of Karuna Manor. Originally the church had a hipped roof and a flat ceiling. The church was refurbished in 1773-74, when it gained its present steep peaked roof. The interior was fitted with a barrel vault and the windows were enlarged. The final change was made in the 1780, when the vestibule was added.

The church is still used in summertime for services, concerts and weddings.

At the southern end of the Topeliuspuisto park atop a massive granite rock stands Töölö Church. The design represents the pure Nordic Classicism of the 1920s. The church was designed by architect Hilding Ekelund and completed in 1930.

Töölö Church has been called the most colourful church in Helsinki. It has several paintings by Paavo Leinonen, and the altarpiece is an oil painting by Henry Eriksson. The exterior ornamentation is limited to the façade overlooking the park. The main entrance features a concrete relief by Gunnar Finne.

The architect Hilding Ekelund was known for his interest in Italy, which can be seen also in his design for Töölö Church. The main colour of the exterior is sienna, which was originally made from clay from Sienna in Tuscany. The interior colour is a type of red that comes from the soil in Pozzuoli, Naples. 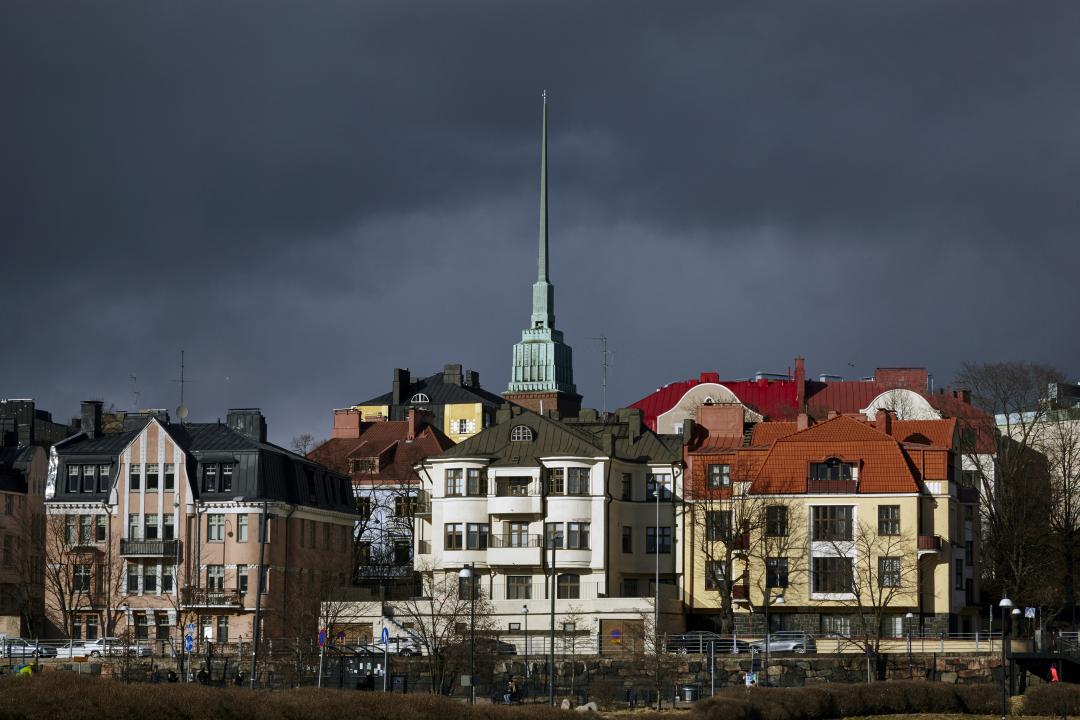 The tall steeple of the redbrick Mikael Agricola Church in Punavuori is a recognisable part of Helsinki’s silhouette. The church was designed in the Functionalist style by Lars Sonck and constructed between 1933 and 1935.

The tower reaches 103 metres above sea level, and amazingly the 30-meter spike of the tower can be retracted if necessary as it fits inside the tower structure. The interior features paintings by Bruno Tikkanen, who also designed the altarpiece. The massive brass chandeliers are based on a design by architect Arvo Muroma, and the some of the textiles are by Dora Jung.

You can also find a cute café from the church's premises. In summertime the closed courtyard is a perfect peaceful hideaway. 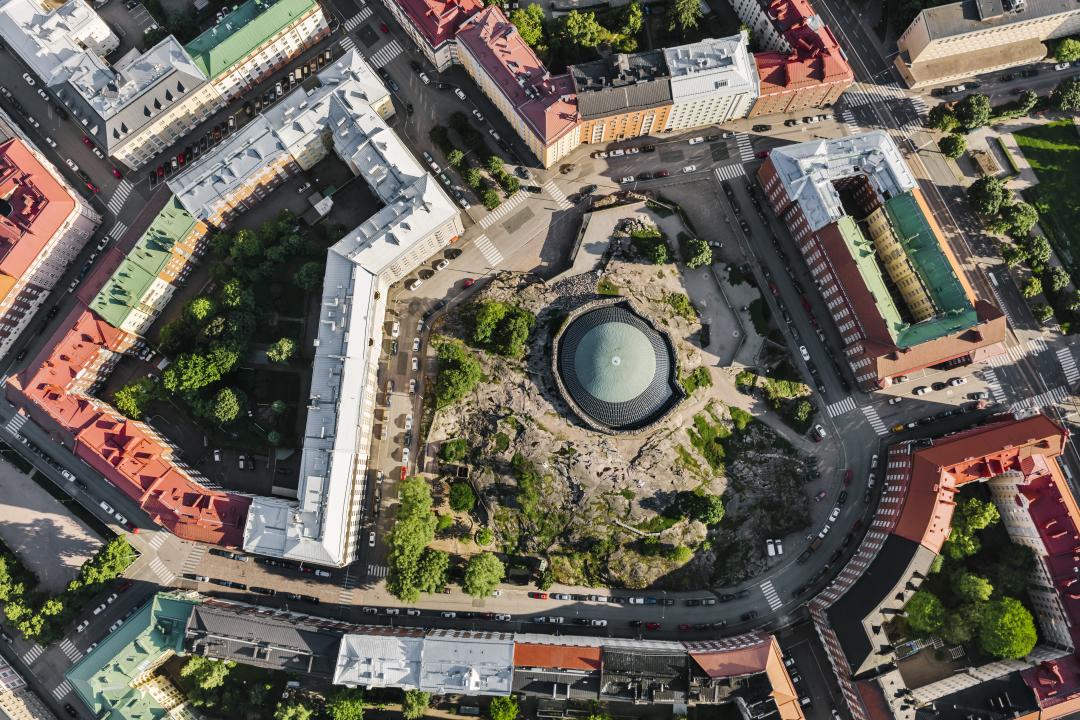 Kuvio
Show in landscape format
Off

The famous “Rock Church” is the most recognisable landmark in the Etu-Töölö district and one of the most popular architectural attractions in Helsinki. The church was designed by architects Timo and Tuomo Suomalainen and constructed in 1968 and 1969.

The idea behind the design was to preserve the open, rocky nature of the site. The interior is circular, and the walls are either natural rock or quarried rock. The space is covered by a copper dome that is supported by the rock. The minimalistic interior design is in harmony with the atmosphere of the space created by the unique light and dripping water.

The massive rock around the church is a popular spot among locals and tourists for walks, picnics and admiring the views. 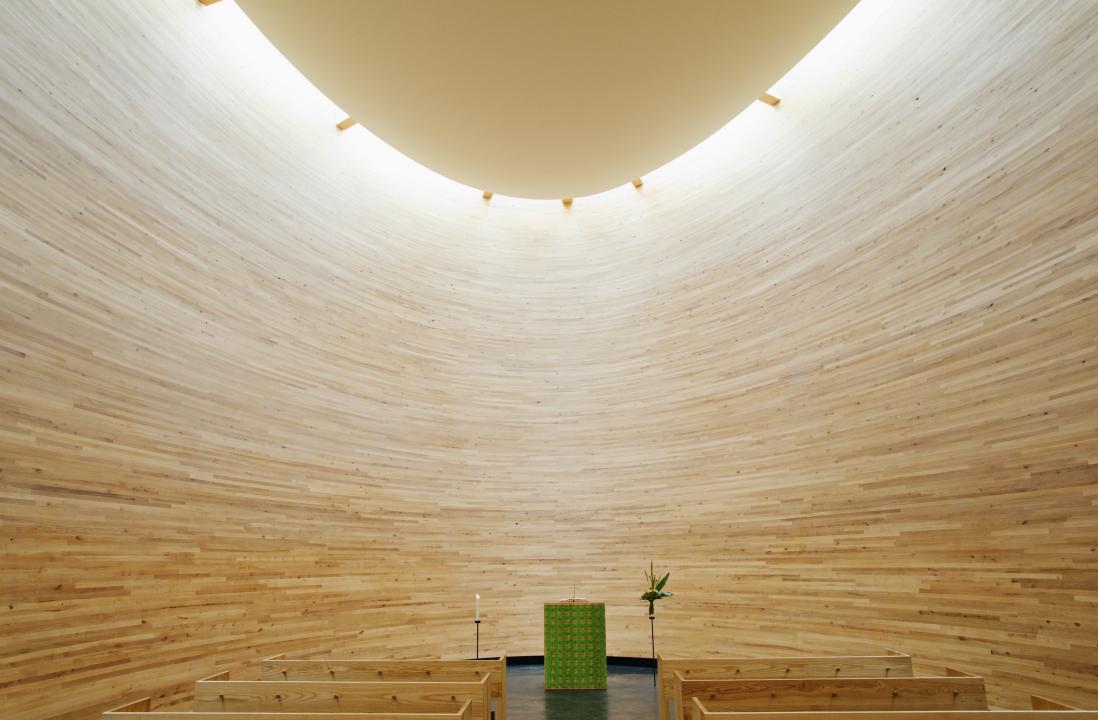 Kamppi Chapel is a stunning example of contemporary Finnish wooden architecture in the Narinkkatori square. Known also as the “Chapel of Silence”, it offers a place to meditate amidst the hustle and bustle of the city centre.

The unique wooden structure is made from CNC-cut glue-laminated elements and the cladding's components are custom-made spruce wood planks. The vase-like chapel’s inner walls are made of thick oiled alder planks. Natural light enters from the ceiling, and the mood is retained at other times by special lighting. The chapel was designed by architect Mikko Summanen from K2S Architects Ltd and completed in 2012.

The chapel welcomes all visitors regardless of religion, outlook or background. Regular church services are not held in the chapel with the exception of evening prayers on Fridays.

Title
Most beautiful churches
Location carousel
Simple liftup
Top 15 sights in Helsinki
Show image on the left
Off
Show created/updated
On
Show in search dropdown
Off
Teaser text
Find the most beautiful churches in Helsinki. Style of the Helsinki's churches ranges from classical to modern, why they are loved by many architecture fans.
Select any filter and click on Apply to see results