Paul Williams
Lead text
This is a guide to an art-filled picnic tour. Winter or summer, with friends or your lover, HAM Helsinki Art Museum's tips guide you to the spots where food, drink and art blend together as the sweet elixir of life. While you enjoy your picnic, please make sure to take care of the sculptures and their surroundings. 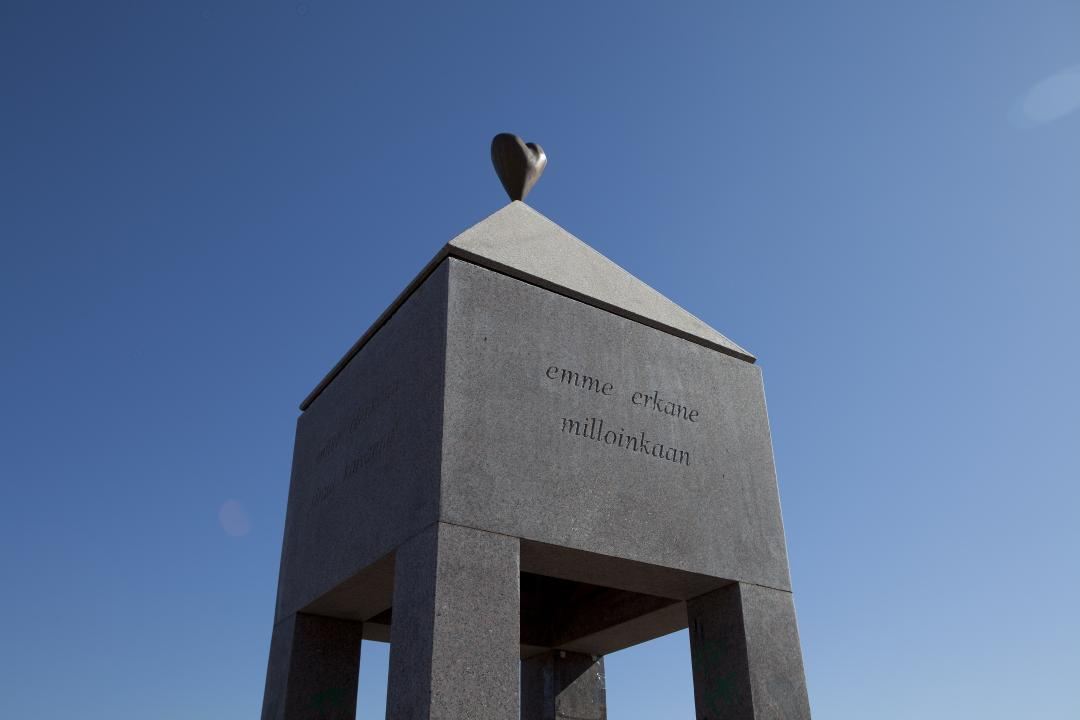 “You, dear in my heart / Every day by your side / We shall never part / How I have loved you.” In Bjarne Lönnroos’s (1959–) art, text serves as the perfect complement to the work. The Temple of Love glows in the dark like a lighthouse, gently guiding us in the right direction.

With this picnic, we suggest an inspection of the heart. Contemplate the people close to you – hopefully you have managed to bring somebody like this along, perhaps with tasty sandwiches. We give you an excuse to whisper your feelings of affection and respect. A moment to cherish for a long time to come.

What: Bjarne Lönnroos: Temple of Love, 2003
Where: Kelkkapuisto Park, Kontula 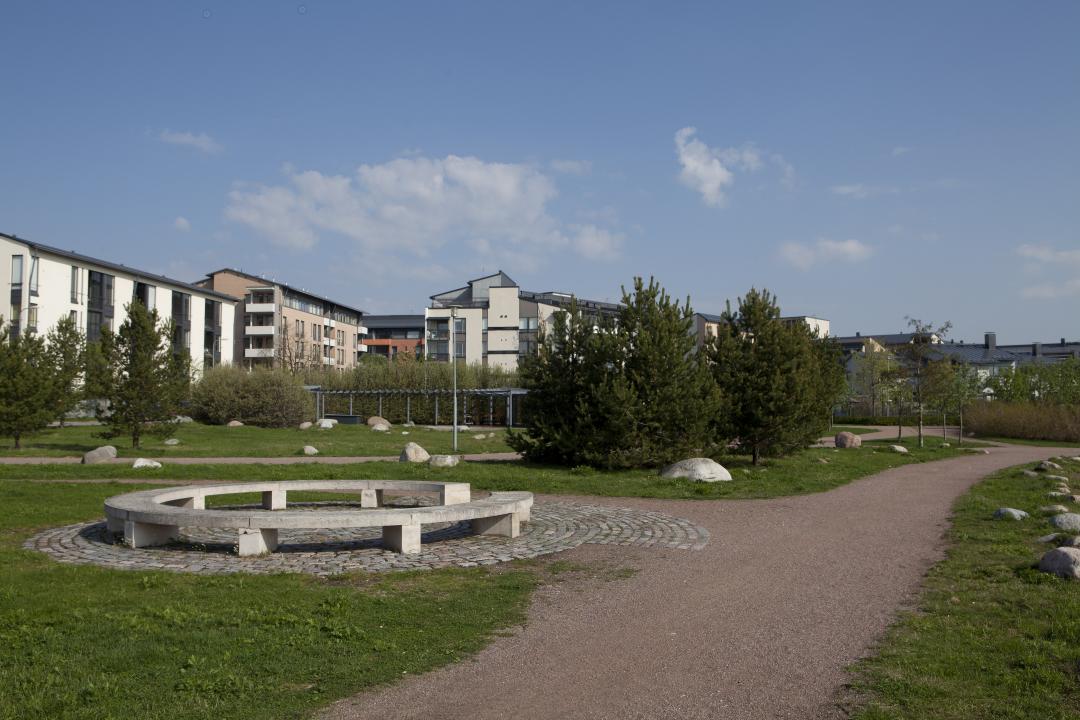 LHR, CGN, VIE and 47 other codes of major airports decorate a bench in the Herttoniemi district by Tuoriniemi beach. Why not prepare an outdoor menu inspired by different countries and focus on daydreaming of travels to come?

The work itself has traveled to Eastern Helsinki from a contemporary arts park in West Sussex, England. The British artist couple has wished that their piece provokes travel-related thoughts. The light-toned stone bench can be admired from beside it, lying in the grass or why not from the water while taking a dip in the sea! 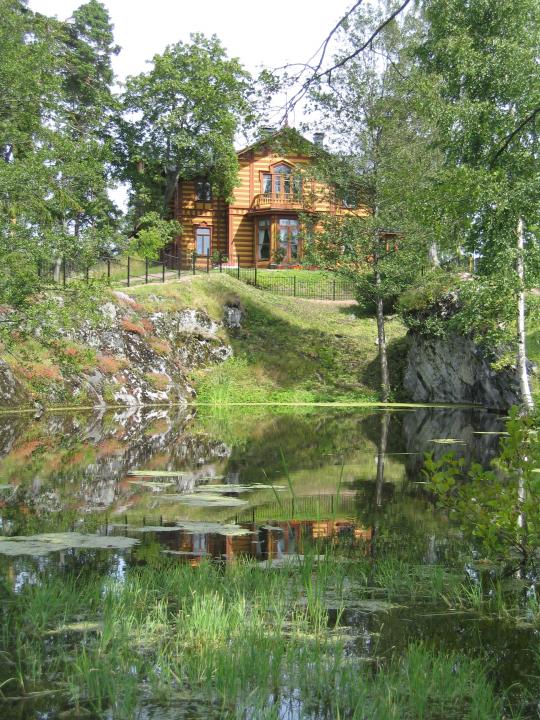 Tullisaari island is a green oasis in Eastern Helsinki. It is one of the best preserved landscape parks in Finland and almost as if created with summertime picnics in mind. The best-known local resident is most likely the opera diva Aino Ackté (1876-1944) who rose to great fame in her time. A villa in the park has been named after her.

The Kagal Memorial Stone can be found near the Villa Aino Ackté. It was erected during the first period of Russian rule (1899-1905) to commemorate a Finnish resistance group. The words cut in the granite in Finnish and Swedish read “Third of August in the year 1901”, referring to a meeting held in the nearby Turholma Mansion, now known as Aino Ackté’s villa. 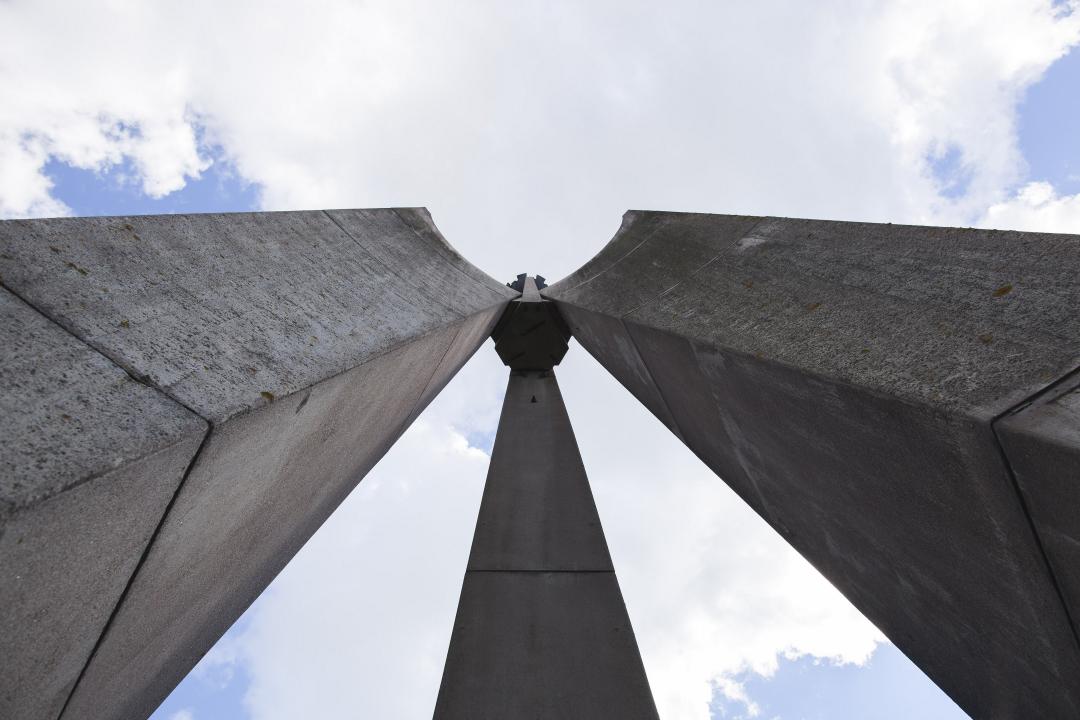 The Merisatamanranta shore in the Eira district invites to lay your eyes on the horizon, or on the compass found in the middle of a tall-standing memorial. Honouring Finnish seafaring tradition and seafarers, the lighthouse-like memorial is known locally as the Eternal Flame. This name derives from the perpetual flame burning 12 metres from the ground on top of the monument, sometimes blown out by a rough wind.

For a less typical picnic mood, arrive here on a foggy morning with a thermos flask of tea. Bring along the person who keeps your flame burning.

The Torch / Memorial for Miina Sillanpää

Does any art exhibition manage to get so close to life itself as the bohemian Tokoinranta shore does? This work allows the spectator to dip into all shades of existence, and almost obliges to sing a simple song or to hold a spontaneous speech on a highly unexpected topic.

The inspiration for this picnic proposal is Miina Sillanpää (1866-1952), working class journalist and politician, and also the first female minister in Finland. It is not unlikely that while nestled by The Torch, picnic-goers find themselves with a strong urge to take action and change the world for the better. That is a fine reason to linger here for longer, perhaps by sharing a delicious soup.

What: Aimo Tukiainen: The Torch / Memorial for Miina Sillanpää, 1968
Where: Tokoinranta, Kallio 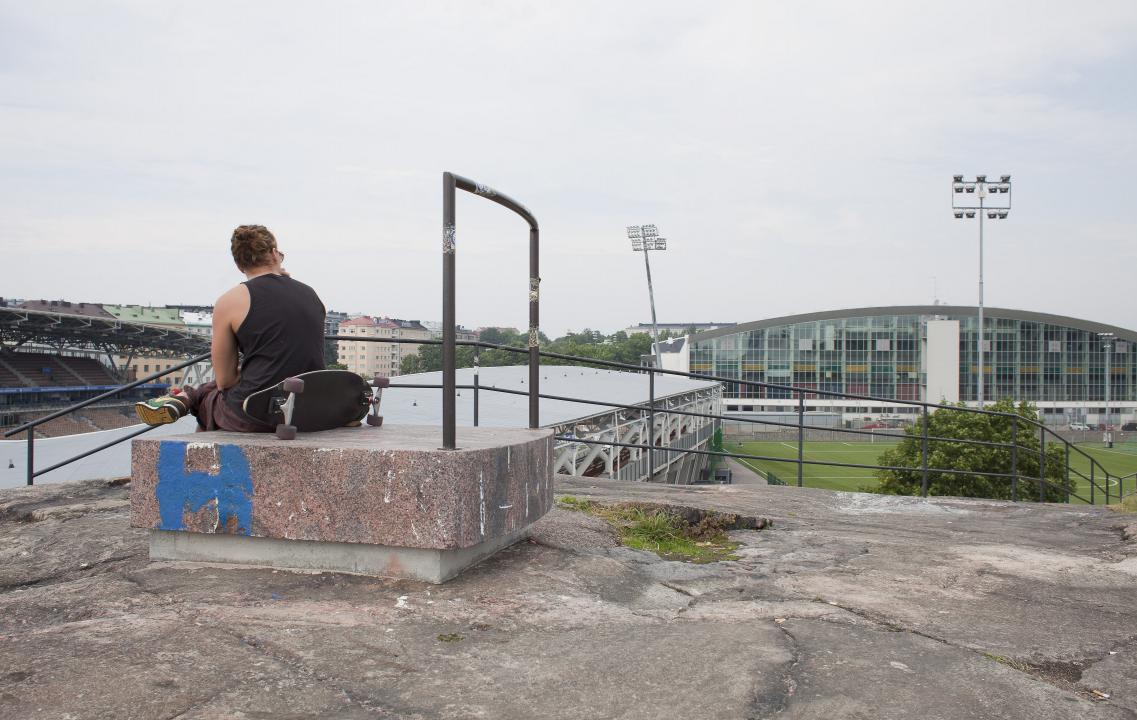 Concerto for the Valley

The sloping rocky outcrop offers spectacular views both to the north and the south. A picnic thrown here is accompanied by a concerto of nature and city. On top of the rock, Denise Ziegler’s (1965-) Concerto for the Valley is a life-size orchestra conductor’s podium that allows those who step on it to conduct an aerial concerto for the birds, echoes and sounds of the city. Or perhaps to hold a speech for your close ones.

The Swiss-born Ziegler now resides in Finland and wants to encourage passers-by to step on the podium, to listen and look around.

What: Denise Ziegler: Concerto for the Valley 2001
Where: Slope park next to Töölö ball field (Töölön pallokenttä), Töölö 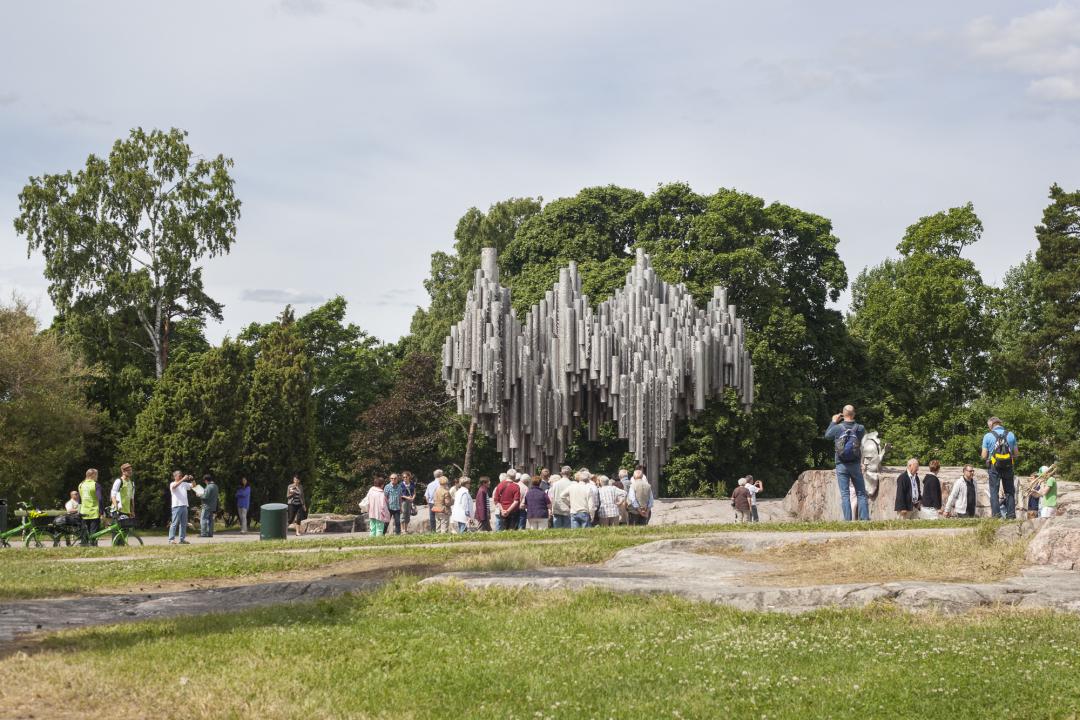 Jean Sibelius (1865-1957) was not only a significant composer, but also a strong personality. He enjoyed luscious evenings in good company and took a country on its way to independence towards European moods through his own example and lifestyle. His love for his talented wife Aino Sibelius (1871-1969) generated a wealth of heartfelt and tender love letters that have since been compiled into a book.

On this picnic suggestion, the rugged monument invites to lay eyes on the sea and read Jean and Aino’s correspondence out loud while tasting a fine red wine. The longer the evening progresses, the truer the experience. 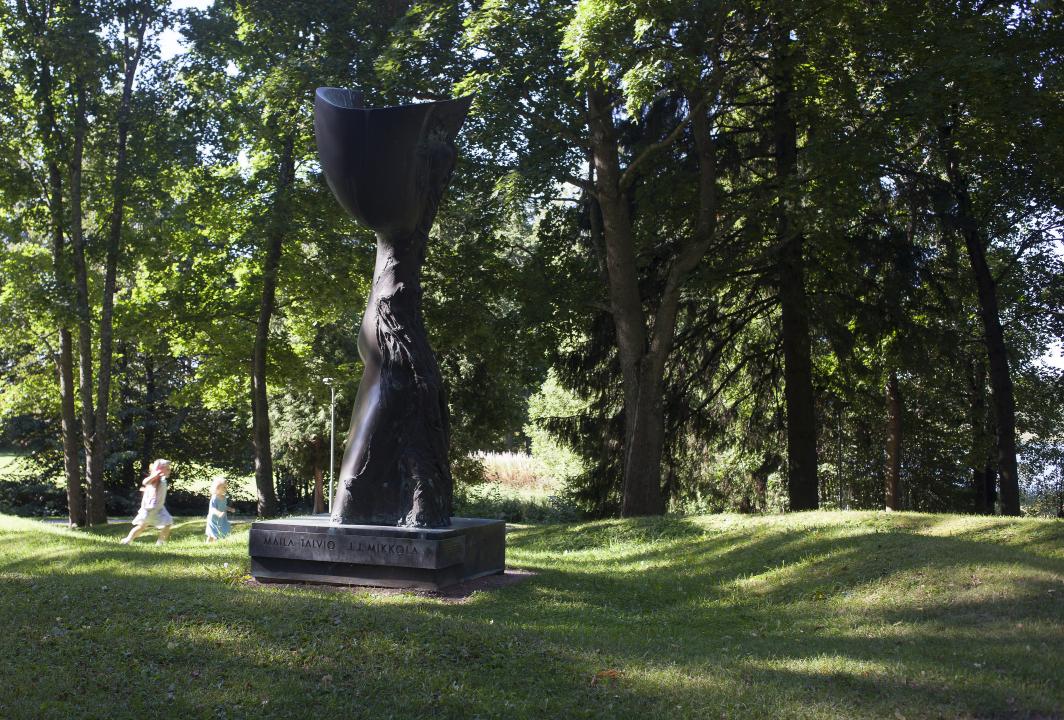 The Daughter of the Baltic Sea / Maila Talvio memorial

Seurasaari island is a classic Helsinki picnic destination, but we suggest to lay down a blanket at a peaceful and charming spot just before the bridge. Maila Talvio Park on the Seurasaarentie street is home to Laila Pullinen’s (1933-2015) bronze statue The Daughter of the Baltic Sea. It is a memorial to writer and cultural figure Maila Talvio (1871-1951).

Pullinen’s sculpture was erected on the location of Maila Talvio’s former home, a house that used to bustle with cultural life. A piece of this home is now a part of the memorial, as it includes an earth relief by Pullinen named The Baltic Sea based on the stone foundations of the torn-down main building. 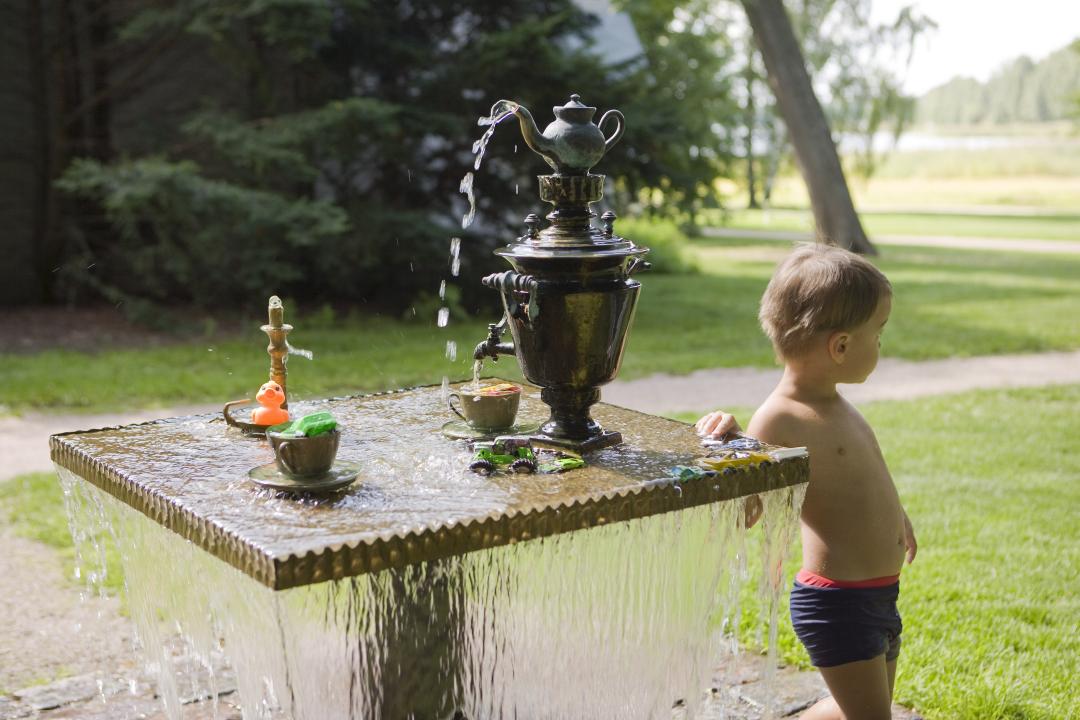 A table set for two in Meilahti invites to sit down. Kalle Hamm’s (1969-) piece includes two tea cups, a samovar and a chandelier. Water flowing out of the samovar creates an illusion of a lace tablecloth. “Tea for Two is a place of relaxation where one can sit down and enjoy the old garden milieu and Chekhov-like atmosphere. It doesn’t matter that the lace cloth has holes – nobody notices it during the dusk hours”, proposes the artist himself.

Bring a thermos flask of tea, china cups and surprise your friend with a unique evening moment.

What: Kalle Hamm: Tea for two, 2004
Where: Tamminiementie 6, Meilahti

I am East I am West

Have you ever felt like you are forced to live with two separate minds? For artist Pekka Jylhä (1955-), this feeling arises from growing up between two strong religious movements in Finland’s Ostrobothnia.

This work of environmental art is born from a life experience on the borders of two cultures. A two-headed gilt bird flies high in the sky (24 carats!), embodying a new chance to create an independent culture. This is an excellent picnic spot for diving into the big existential questions of life. May the force be with you.

HAM has created several other sculpture trails. They feature the life of artist Tove Jansson and take you to an expedition to the newest public artworks in town, among others.

Title
Fill you picnic bag here
Card list
Title
Wonderful picnic parks in central Helsinki
Link
More parks
Location carousel
Show image on the left
Off
Show created/updated
On
Show in search dropdown
Off
Teaser text
This is a guide to an art-filled picnic tour. While you enjoy your picnic, please make sure to take care of the sculptures and their surroundings.
Select any filter and click on Apply to see results