Yiping Feng and Ling Ouyang
Lead text
Helsinki has nearly 40 public libraries and numerous scholarly libraries. These safe havens of civilisation offer food for the soul also for architecture and history enthusiasts. Here we present our six most beautiful libraries.

Finland takes libraries seriously, the love for reading reflects strongly in their culture. The Finns are ranked as some of the most literate people in the world, as well as some of the most prolific users of libraries. There is also a lot of historic significance that libraries hold amongst the Finns. Every library, whether new or old has a personality of its own and holds a significant position in the cultural scene in Helsinki. 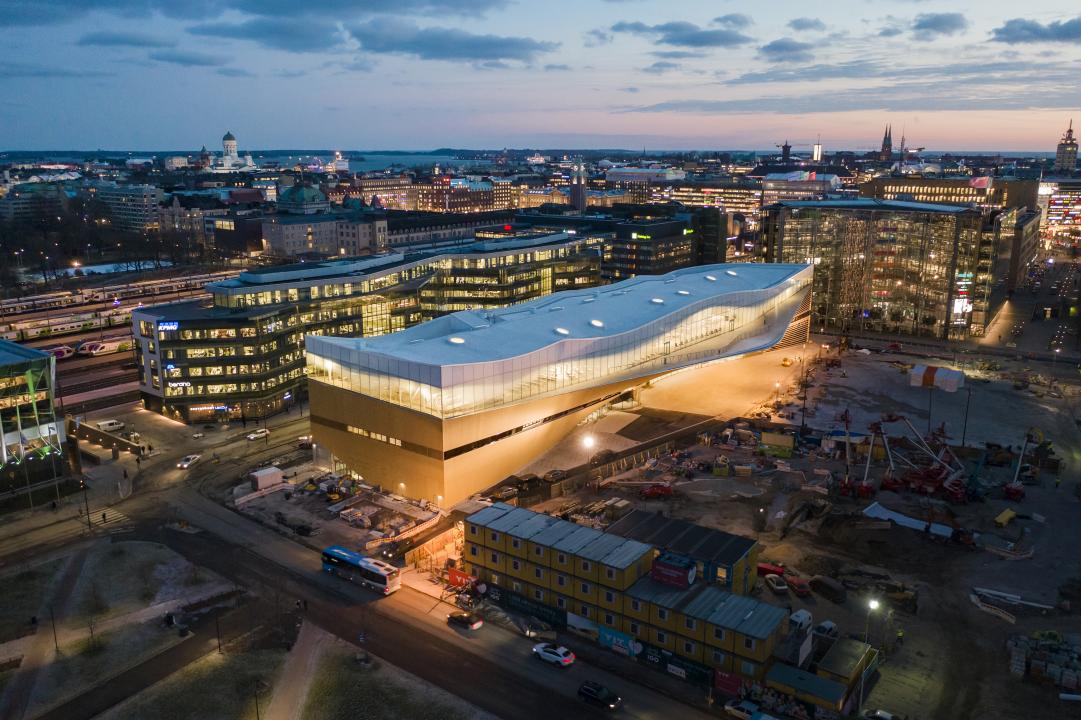 Oodi – a new central library for Helsinki opened on the fifth of December 2018, a day before Finland marks its 101st anniversary as an independent country. Described as the nation’s birthday gift to its citizens, the 17,250 sq m library has been designed by Finnish architecture firm ALA Architects.

Oodi is located opposite the Finnish Parliament, a site chosen to symbolise the relationship between the government and the populace: with their two houses facing one another across a civic square surrounded by institutions of the arts and culture including the Kiasma Museum of Contemporary Art, the offices of the Helsingin Sanomat Newspaper and the Musiikktalo Concert Hall.

The design for Oodi was chosen following an anonymous international competition that attracted 544 entries. The winning design, completed by Finnish practice ALA Architects occupies a hugely significant unoccupied site, one of the last remaining in Central Helsinki.

The swooping structure of the library, clad in planks of Finnish spruce timber, seeks to extend the public space of the civic square into the enclosed public space of the library, creating a covered canopy that blurs the boundary between the two and a balcony that allows library visitors to look across the square onto the national parliament building.

Only one third of the space within the library is used to hold books - a relatively modest 100,000 volumes at any time - however thanks to online services and a team of book-sorting robots, users of the library have access to nearly 3.4 million items at the click of a mouse, making Oodi the principal service point within a much larger, distributed library system.

Next to Senate Square and Helsinki Cathedral you will find one of the most significant buildings in Helsinki that conceals within it a breathtakingly beautiful temple to science.

The main building of the National Library of Finland is one of most renowned monuments of early-19th century Empire architecture in Finland. It was also one of the most significant public libraries of its time in Europe.

The National Library of Finland is the biggest and oldest scholarly library in Finland. It is also one of the University of Helsinki’s biggest independent institutes. It is responsible for the collection, description, preservation and accessibility of Finland’s printed national heritage and the unique collections under its care. These collections include over three million books and periodicals.

The building was designed by Carl Ludvig Engel and completed in 1840. Engel combined in a unique way classical themes with references to the ancient world. The symmetrical placement and the layout of the library halls were derived from the bathhouses of the Roman Emperor Diocletian, while the façades were arranged according to Classical temple architecture.

The National Library of Finland underwent a massive renovation between 2013 and 2015 and reopened to the public in spring 2016.  The original doorways and wooden floors in the reading halls were restored to their former glory, and the ceiling murals in the foyers were reconstructed.

The library on Rikhardinkatu opened in 1882 and was the first building in the entire Nordic region that was designed as a public library. Here you can get a good feel for how the working classes were offered the chance to improve themselves and spend their time off in civilised surroundings.

The Neo-Renaissance building was designed by architect Carl Theodor Höijer, the same man who designed the Ateneum Art Museum and Hotel Kämp, for example. The building was funded by donations collected by the Helsinki Ladies’ Association.

Rikhardinkatu Library served as the main building of the Helsinki City Library all the way until 1986. It continues to be an active and lively library that many people come to visit, even from far away, to enjoy the architecture and unique atmosphere. The building features cosy reading corners, a well-lit reading hall, numerous workspaces and impressive views over the roofs of the city.

The library also has many books, of course. In addition to large fiction and non-fiction collections, you can also admire the collection of over 400 artist books. There is even an art library, where you can borrow paintings, prints, sculptures and photographs by artists from the Helsinki Artists Association.

The redbrick library building that stands proudly at the end of Porthaninkatu marks the centre of the Kallio district. When it opened in 1912, the number of books borrowed from the Helsinki City Library broke new records. The library’s legendary reading hours also attracted hundreds of local kids and even kept the most unruly ones quiet.

“All of the rooms are very well lit and make an extremely pleasant impression. They are more fun and cosier than the city’s reading hall. Hopefully all the readers in Kallio and Sörnäinen will use this new centre of enlightenment a lot and enjoy it.”

Inside the library you can sense the distinct local atmosphere. In addition to books, you can borrow instruments, including a ukulele and kantele, and games, including the classic Finnish game of mölkky. The library also features LGBTQ literature, comics and films on its rainbow shelves. 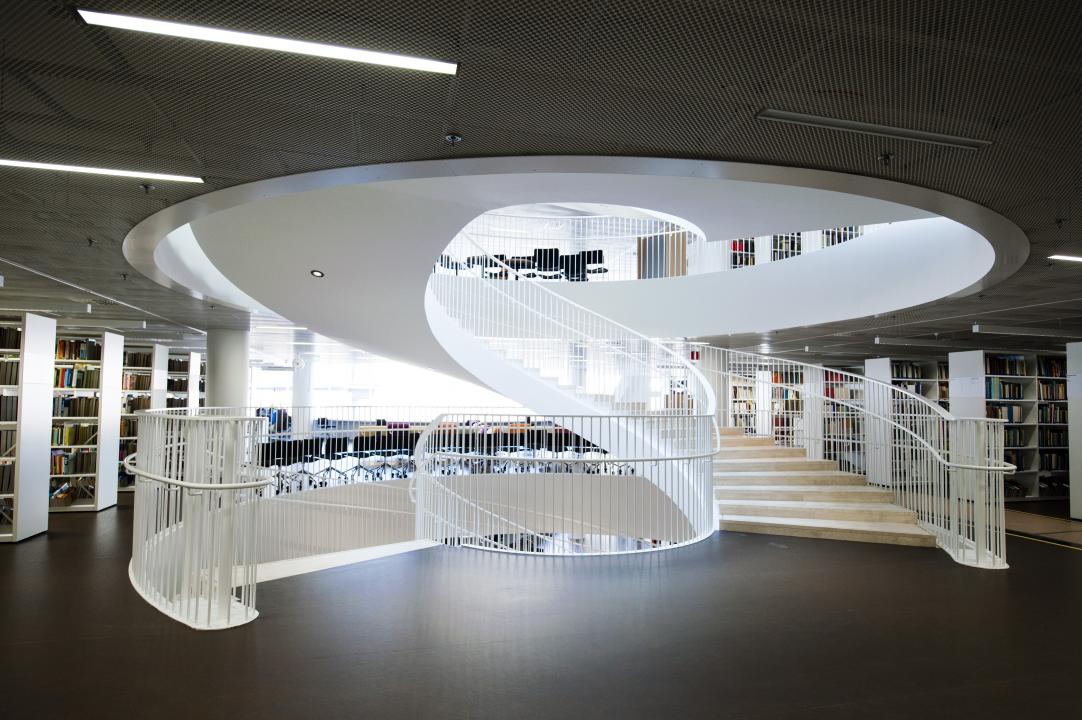 The main library of the University of Helsinki is also the biggest scholarly library in Finland. The Kaisa-talo building opened in 2012 and represents the latest library architecture, making it a popular attraction among fans of both libraries and architecture.

The library has won broad acclaim internationally. The idea behind the design was to combine pure beauty and attractiveness with functionality. The result is a building that blends in with its environment and utilises natural light in a stunning way. The library was designed by Anttinen Oiva Architects, who won the architecture competition in 2008.

The seven above-ground floors of the library are connected by a massive curved void that can be admired from the entrance on Fabianinkatu. Stroll through the library to the seventh floor, where you will find a large living room-type space with amazing views to the historic Empire centre. The interior of the library features classic Finnish designs by Ilmari Tapiovaara and Yrjö Kukkapuro.

Inside the library you can admire the building and the surrounding city, check out the books, watch the students and do your own work. There are around a thousand workspaces in the open reading areas, quiet reading rooms, group workspaces and rest areas. You will also find a café on the second floor by the Vuorikatu entrance.

Töölö Library was designed by architect Aarne Ervi, who worked with Alvar Aalto and Toivo Paatela before opening his own studio in 1938. When the library opened in 1970, it featured the first music section in Helsinki.

The busy library soon needed more shelf space, and over the years some of the architectonic details were overshadowed or not utilised at all. The library underwent a major renovation from 2014 to 2016, when the original solutions were restored – including the ear-shaped benches in the music section. You can find other anatomical features as well: if you look up while climbing the stairs, you will see an eye staring down at you.

According to the wishes of its users, the library was transformed into more of a social space for meeting friends and hanging out. Nevertheless, it still houses the biggest quiet study hall among all of the public libraries in Helsinki. The library and adjacent Topelius Park were also reconnected during the renovation by reopening the terraces and long balconies.

Clever modernist architecture with lots of light and playful details in a green park setting – what more could you ask for in a library. How about a dog that you can read aloud to? Yes, you can even borrow one of those!

The City of Helsinki’s libraries offer a massive selection of readable, watchable and listenable materials. They also offer free WiFi, computers, and various information and printing services. Many public libraries offer a selection of daily newspapers, also in English. In addition to books, you can borrow tennis racquets, skates, skis and heart rate monitors, as well as headphones and instruments. Visitors can also obtain a temporary library card by presenting your personal ID and giving your address.

Card list
Simple liftup
Bookstores in Helsinki
Show image on the left
Off
Show created/updated
On
Show in search dropdown
Off
Teaser text
Thinking of visiting a library in Helsinki? See our list of stunning Helsinki libraries - must-visit places for any architecture and history enthusiasts!
Select any filter and click on Apply to see results