Best new restaurants in Helsinki in 2021

Belén Weckström and Anna Weckström
Lead text
An impressive number of interesting new restaurants opened in Helsinki in 2021. Our restaurant expert Timo Santala lists some of the very best that are definitely worth checking out!

Having gained a reputation from its extremely popular pop-up restaurants in different locations, Bona Fide has found a home among the other fine dining restaurants in the Kruununhaka district. Comprising of young chefs Ilpo Vainonen and Eeli Kaasinen together with sommelier Johan Borgar, the team has impressive Michelin-quality experience from restaurants such as Inari, Grön and Chef & Sommelier. Together they have created a new wave neighbourhood restaurant that conjures up innovative and fascinating dishes from seasonal vegetables, wild fish and game without succumbing to gimmicks. The largely first-class vegetarian cuisine and sometimes unexpected wine recommendations solidify Bona Fide’s reputation as a bold innovator.
Vironkatu 8, Kruununhaka

When Ego took over the premises of the former Juuri restaurant in the Ullanlinna district, it successfully retained its laid-back and high-quality neighbourhood restaurant atmosphere. The kitchen at the new restaurant is in the hands of two former Chefs of the Year, head chef Kalle Tanner and Ismo Sipeläinen. The two have created an extremely high-quality and refined “best of the day” menu that is regularly updated on the blackboard, featuring simply beautiful and tasty portions made from the very best seasonal ingredients. Classic bistro dishes on the permanent menu include glazed sweetbread and especially the popular veal schnitzel with wild garlic butter. Ego relies on classic servings that are slightly modified in its own style, but not too much.
Korkeavuorenkatu 27, Kaartinkaupunki

Chaos is Jenni Tuominen's first proper restaurant, who previously had her own pop-up experiments during Restaurant Day, appeared on TV on the Mad Cook Show and attended Le Cordon Bleu culinary school in Paris. Situated in the heart of the Punavuori district, Chaos lives up to its name by refusing to stick to boring conventions. The menu is full of larger and smaller servings that borrow and apply elements from different food cultures from around the world. There are no starters, main courses or desserts; instead, you can taste sweet and savoury dishes in any order you like in a chaotically satisfying jumble – there are no rules.
Iso Rooberntinkatu 10, Punavuori

This pink romantic dream is the creation of Richard McCormick and Alex Nieminen, who like to stay on the cutting edge of restaurant trends. The Parisian brasserie menu offers “hedonistic responsibility”, meaning mostly vegetarian cuisine but also oysters, lobster and tartar together with champagne and colourful cocktails. The visual appeal of the impressive interior extends to what you are served on the plate. Chéri exudes the party atmosphere of a girls’ night out and is a popular place to kick off the weekend.
Eteläesplanadi 22, Kaartinkaupunki 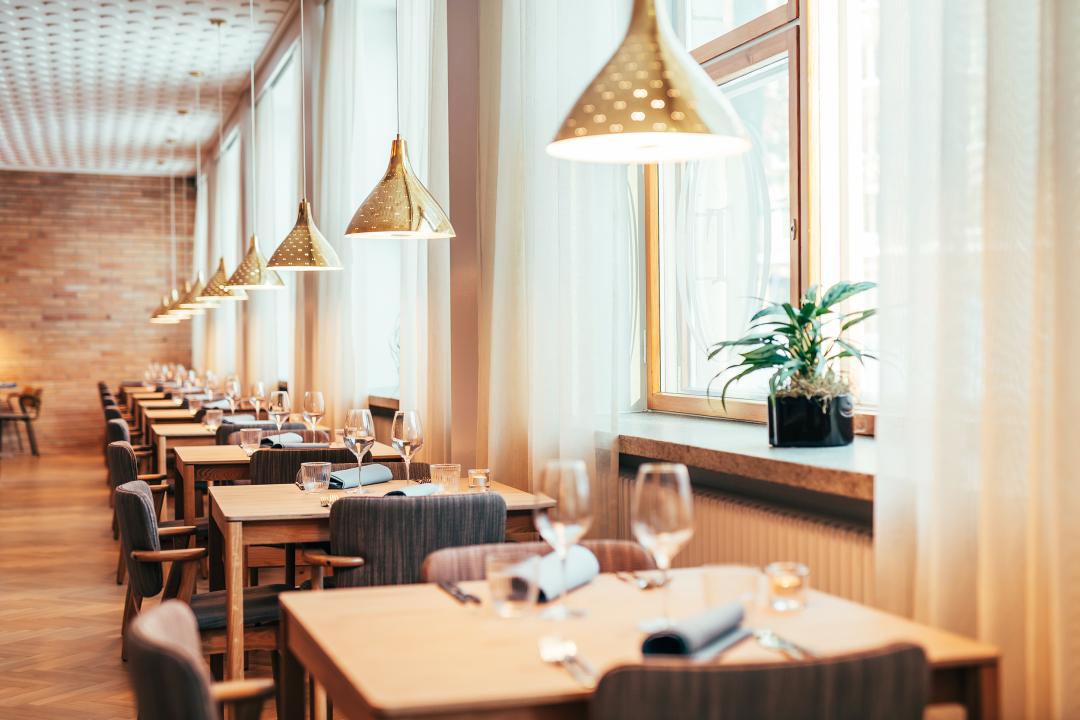 The iconic former main building of the Helsinki School of Business complete with lighting by Paavo Tynell is a magnificent piece of architecture featuring an interior design that has been painstakingly renovated and restored with respect to the original spirit of the 1950s. Delights are also offered in the spacious and bright dining hall of the Töölö restaurant. The classic and straightforward menu by Timo Lepistö features modern Nordic cuisine that respects traditions and is made from Finnish ingredients and prepared with French culinary skills. The artichoke soup is accompanied by crispy chicken skin, walnuts, roasted pears and truffle oil, while the rainbow trout pastrami is served with marinated roe, fennel and caramelised cream.
Runeberginkatu 14-16, Etu-Töölö

Matti Wikberg redesigned Boulevard Social together with Sylvester Soisalo, former head chef at Palace, and opened Boulevard Bar & Seafood. Specialising in high-quality and responsibly caught fish and seafood, their new restaurant is a classically stylish place to savour everything from oysters and champagne to a full seafood dinner.
Bulevardi 6, Kamppi

Burger master Akseli Herlevi’s fun restaurant concept takes Chef’s Table-style dining to the next level, having set up seats in the middle of an industrial development kitchen. Mini-burger sliders, popcorn shrimp and other street food is served indoors in the kitchen, and the ten-course surprise menu is accompanied by a drinks menu. The atmosphere is beyond relaxed as customers get to spend an evening behind the scenes with the chefs themselves.
Sturenkatu 21, Vallila

The concept of Izakaya restaurants serving casual Japanese bar food really landed in Helsinki in 2021. Shinobi was opened by Jesper Björkell from Hanko Sushi, who has studied in Japan. The small portions, such as the tuna tataki and scallop on seaweed, capture the Izakaya vibe, as does the restaurant’s minimalistic interior with its paper lanterns and the neon lights in the bar. Yakitori skewers complement the cavalcade of snacks, and you will even find Wagyu sirloin steak on the menu.
Albertinkatu 38, Kamppi 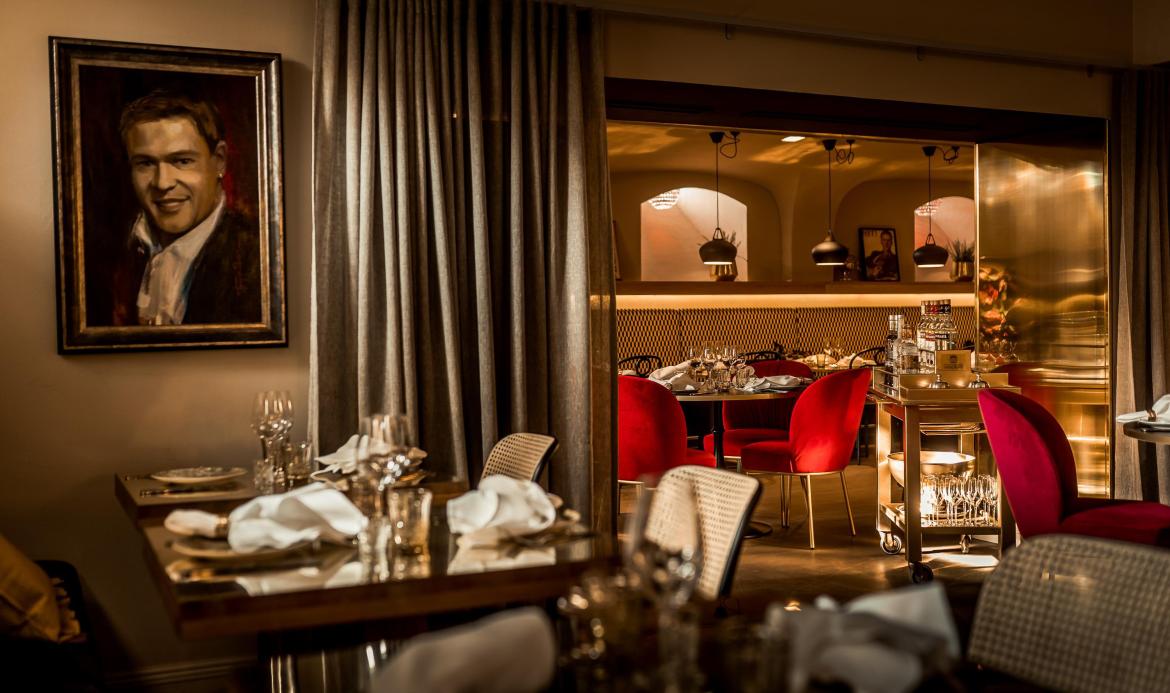 Having branched out and created a successful khachapuri business in Finland, actor Ville Haapasalo has opened a “Soviet restaurant” next to the Market Square. The menu at Davai Davai offers a cross-section of Russian cuisine with a Finnish touch, including a long list of zakuski appetisers, pelmeni, blinis and, of course, khachapuri. Vodka is served Russian style by the gram, and the wine list is composed of Eastern European wines. Sticking with the theme, instead of making a table reservation, you are asked to make a “visa application”.
Pohjoisesplanadi 17, Kruununhaka

Having gained popularity with their pop-up experiments, Minori Yoshida and Benjamin Öberg found a home for their Sake Bar & Izakaya restaurant in the Kruununhaka district. The two have taken the Izakaya experience in a slightly more refined and surprising direction. Instead of having to make choices, you can focus on enjoying the treats on the tasting menu, which changes according to the fresh ingredients and is offered with sake recommendations. The quality is guaranteed, the atmosphere is relaxed, and fine Japanese cuisine is amply represented on the plate.
Vironkatu 11, Kruununhaka

Another Izakaya newcomer is Neko Izakaya, a small and minimalistic restaurant in the Sörnäinen district that is a real find. The small portions are perfect for sharing, and instead of sticking to Japanese delicacies alone, the menu also flirts with other Asian flavours. Fried cauliflower is served with Vietnamese hot sauce and salmon sashimi with ponzu sauce and fermented plum. The pleasant couple who owns the restaurant also run Kokoro-sushi, so naturally Neko also serves premium sushi.
Kulmavuorenkatu 7, Sörnäinen

Oppa is a genuine Korean BBQ restaurant complete with grilling tables and fans. The pleasing visual aspect is completed by the dark lighting and the grilled foods and side orders, which are served in aesthetically pleasing cups and bowls. You can even order authentic Korean Jinro soju spirits to accompany the delicious food.
Eerikinkatu 14, Kamppi

Card list
Simple liftup
Michelin-restauranger i Helsingfors
Show image on the left
Off
Show created/updated
On
Show in search dropdown
Off
Teaser text
An impressive number of interesting new restaurants opened in Helsinki in 2021. Our restaurant expert Timo Santala lists some of the very best that are definitely worth checking out!
Select any filter and click on Apply to see results