Kalasatama's central seaside location and a real sense of community are probably the best things about this area of Helsinki. The people here have been instrumental in creating communal projects such as green spaces with growing boxes for plant cultivation, high quality shared spaces, and investments in electric bike charging stations and solar panels.

Kalasatama is a neighbourhood built by the sea in the eastern part of the inner city. It is one of the largest new areas being built in Helsinki, and construction is expected to last until the late 2030s. The former port and industrial area has already turned into a district of more than 5,000 people and thousands of new jobs.

In Aki Kaurismäki's acclaimed film The Man Without a Past, the unnamed protagonist starts a new life among the shipping containers of a dingy harbor. The film, whose accolades include the Grand Prize of the Jury at the Cannes Film Festival, was filmed on the seafront where the suburb of Kalasatama is currently expanding.

Kalasatama, literally the "fish harbor", is one of the fastest growing areas of Helsinki. This transformed industrial port is now home to more than 3,000 inhabitants, with the population expected to rise to 25,000 by the year 2040. The novel suburb has provided the city with the chance to pilot numerous projects in sustainable development. The Smart Kalasatama venture, for instance, is an "urban living lab" that aims to improve the way shared spaces are utilized and how local waste management is conducted. Eco-friendly solutions to constructing office buildings are also at the top of the project's to-do list. The so-called Urban Environment House is an office block currently under construction that will be almost completely emission-free.

Despite still being a work in progress, Kalasatama offers exciting experiences from public art installations to pop-up pavilions and cafés. In addition to the brand new edifices, developers are putting older buildings and existing resources to good use as well. The Teurastamo - former Abattoir - cultural hub and foodie spot was built on the site of an old wholesale market, where internationally renowned musical events and market gatherings are already a staple of the area. 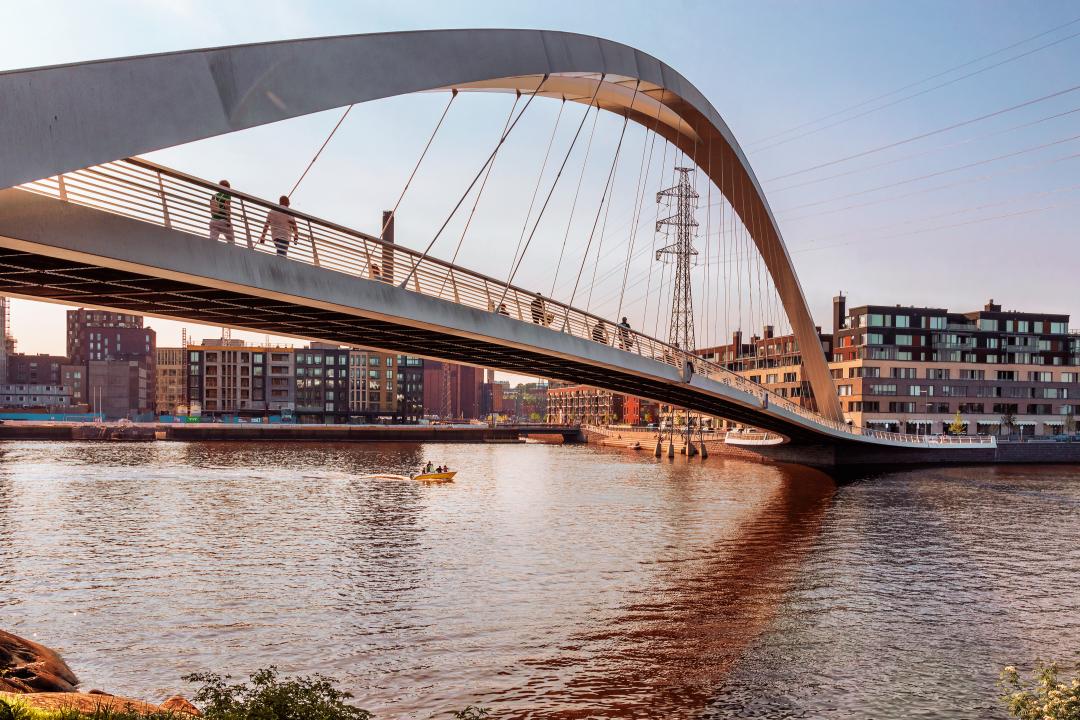 In 2018 the Redi shopping center was opened in Kalasatama, which brought shops and restaurants as well as a movie theater, church services, and the free public Olohuone space right to everyone's fingertips. The different wings of the shopping mall are named after events or people in Kalasatama's history. Sailors, merchants, workers, and other folk of all kinds started to mix Finnish, Swedish, Russian, and other languages they heard on the docks as they conducted business — and thus the original "stadi" or Helsinki slang was born.

Kalasatama acts as a hinge of sorts between Helsinki's central areas and the suburbs. An up-and-coming area to the north is Verkkosaari, which provides access to Arabianranta and the rapids at Vanhankaupunginkoski, where Helsinki was founded in 1550. The eastern reaches of the city can be reached by bridges, the most beautiful of which is the now Instagram-famous Isoisänsilta or "Grandfather's Bridge" leading into Mustikkamaa.

Title
Sights on the map
Location carousel
Simple liftup
Helsinki is exciting, creative and growing
Show image on the left
Off
Show created/updated
On
Show in search dropdown
Off
Teaser text
Kalasatama, the "fish harbor" is one of the fastest growing areas of Helsinki, and is known for its central seaside location and eco-friendly solutions.
Select any filter and click on Apply to see results