Our office is at Kruununhaka, close to our home and our kid's daycare, which are both in Kallio on the other side of the water. It's fun that while Kruununhaka (or Krunikka) is both right by the downtown area and very close to Kallio, it has a distinct feeling of its own, more quiet and calm. The area is very uniform architecturally and it is worthwhile to come here for a stroll to examine the old houses and the numerous antiques and second hand shops. The sea hugs the area from the north, east and south. Klaus has even spotted a seal on his way to work.

The central district of Kruununhaka is home to the uniformly Empire-style buildings surrounding the iconic Helsinki Cathedral and many noteworthy public buildings. There is not a lot of green space among the beautiful stone blocks of buildings, but the terrain is diverse and many streets have a view of the sea.

Kruununhaka became the educational and governmental epicentre of the city in the early 19th century through a construction effort led by the architect C.L. Engel. The most relevant architectural highlights in the area are the Senate Square and its surrounding Empire-style streets, as well as the Helsinki Cathedral, built from 3 560 000 bricks. Other notable buildings in the neighbourhood include the Presidential Palace, the Government Palace, the City Hall, the Bank of Finland, the Palace of the Nobility, several departments of the University of Helsinki, and other distinguished institutions.

The streets by the Senate Square line an area called the Torikorttelit, which is home to  dozens of restaurants, cafés, independent shops, the City Museum, and a cinema. The Liisankatu and Mariankatu streets deeper into Kruununhaka also have many shops for friends of antiques, vintage, and design.

One impressive Kruununhaka sight is the seaside boulevard. An interesting pitstop on the maritime walkway is the Halkolaituri Quay, which functioned as the main harbour of Helsinki from the mid-18th century until the late 19th century. The shore has a walkway to the park island of Tervasaari, where many of the 7,400 Kruununhaka residents and their dogs enjoy a stroll.

Title
Things to see and do in Kruununhaka
Card list 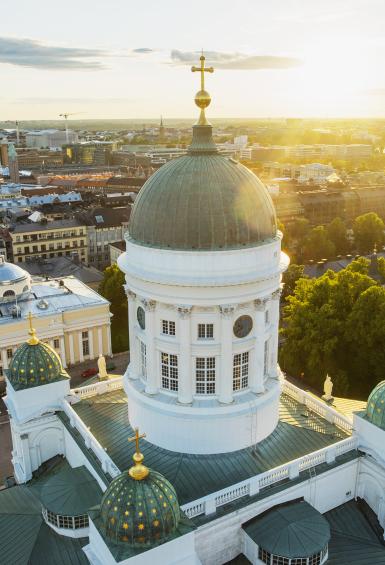 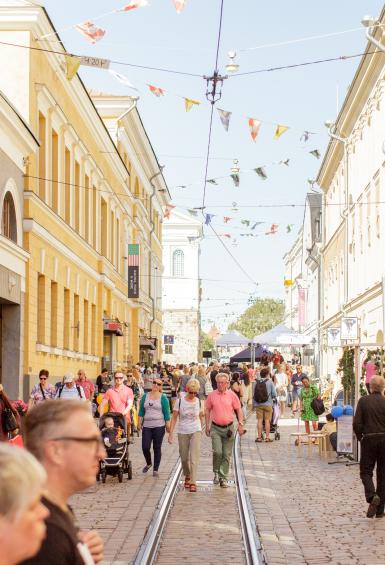 Title
Dinner in Kruununhaka
Location carousel
Simple liftup
Walking route in historical Kruununhaka and Katajanokka
Show image on the left
Off
Show created/updated
Off
Show in search dropdown
Off
Teaser text
The central district of Kruununhaka is home to the uniformly Empire-style buildings surrounding the iconic Helsinki Cathedral and many noteworthy public buildings. There is not a lot of green space among the beautiful stone blocks of buildings, but many streets have a view of the sea.
Select any filter and click on Apply to see results