Visit Finland
Lead text
The more we eat vegetarian and vegan food, the better it is for the climate. Another basic principle is reducing and avoiding food waste. The choices we make when selecting the food we eat may seem like small deeds, but together with the supply chain, they have a big impact on the carbon footprint. Nolla and Way Bakery are examples of local restaurants in Helsinki that are helping reduce CO2 emissions without compromising flavour.

The most important factor that makes a restaurant sustainable is what’s on the plate. The criteria for more sustainable choices state that restaurants should include at least one well-balanced vegan meal, preferably several. In addition, there should be an emphasis on organic, fair-trade and locally produced food items. In terms of beverages, tap water, for instance, is an environmentally friendly choice. There are many ways to make use of food waste. One solution is ResQ Club, a mobile app that makes it possible for users to pick up leftover food from restaurants. Takeaway culture and fast food have boosted the need for disposable plates and containers, and this mindset needs to be adjusted. 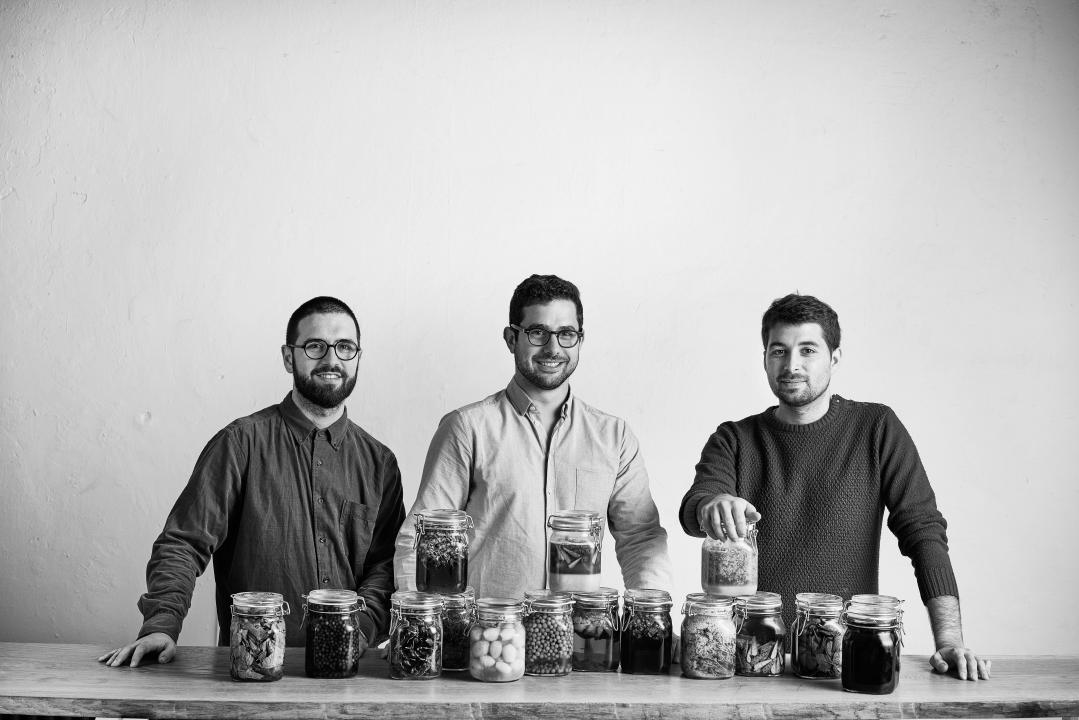 Nolla sets an example for sustainability

What if everything could be done completely differently – and much more sustainably? Luka Balac, one of the founders of the restaurant Nolla, says it all started out of frustration. Together with current business partners Carlos Henriques and Albert Franch Sunyer, Balac had long been dissatisfied with the unsustainable practices in the restaurant industry. The three got to know each other while working at the same time at the restaurant Olo.

“The amount of food waste in the restaurant industry on the whole is quite shocking,” Balac says. So the three decided to open Nolla, whose entire operations are guided by sustainability. “We are not perfect, but we strive to do absolutely everything on a sustainable basis. We want to explore all the different possibilities and take them as far as possible. Basically, we want to make the right decisions in everything we do,” Balac says.

In practice, this means a wide range of things. The ingredients are primarily biodynamic organic produce, and they are sourced locally in the most sustainable packaging possible. Balac admits that they have been even quite difficult customers for many wholesale suppliers, as they do not accept anything that is not delivered in reusable packaging. On the other hand, being “difficult” also means being a frontrunner: together with the restaurant’s fish wholesaler, a functional reusable transport box has been developed that is now used by many other restaurants as well.

“Another similar successful packaging story is the reusable rigid plastic barrels for coffee transportation that we developed together with Kaffa Roastery. Quite a few other cafés have also begun using these,” says Balac.

As its name implies, Nolla (“Zero”) strives to eliminate food waste. This includes conscientious recycling: any remaining food waste is composted in its own composter, and the resulting soil is returned to the farms where the ingredients came from. Nolla is also self-sufficient in many respects. For example, all its juices and even the extracts used in its drinks are made in its own kitchen.

This attention to detail does not end with the food either. The restaurant’s electricity is supplied by wind power, staff uniforms are made from recycled hospital sheets, and the soaps in the restrooms are made from leftover cooking fat. Nolla also operates in a socially sustainable way. Equality is important. “We all have the same uniforms, whether we work in the kitchen or in the front. We are all on the same level, and we do not differentiate on the basis of what each individual does,” Balac says.

Nolla sounds like the perfect restaurant in terms sustainability, but Balac admits that there is still lots of work to be done.

“We can continuously improve in everything we do. We aim to calculate the carbon footprint of our operations in the future. All our decisions so far have been based on common sense, but we would really need more fact-based information.” 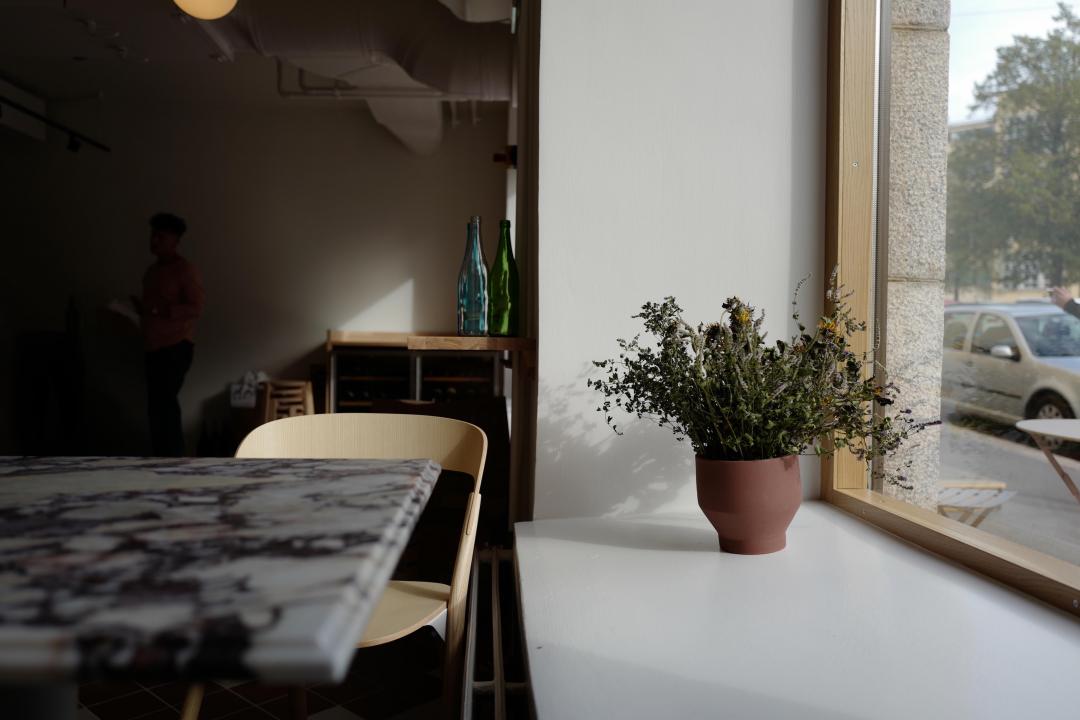 “Locally produced” is the guiding responsibility principle of Way Bakery in the Kallio district of Helsinki. Its hit product is its own organic sourdough bread.

“All our flour, for example, comes from nearby Porvoo. We use a lot of flour, so in terms of volume this already has a positive impact,” says restaurateur Lauri Kähkönen from Way Bakery.

The founders of Way Bakery also run the restaurant Grönn, which is known for its contemporary Finnish fine dining menu. Way Bakery itself is a bakery that also serves breakfast and lunch. Breakfast dishes are built around its sourdough bread and served with a variety of toppings and side dishes, such as cheese, ham and celery. The ingredients are sourced mainly from Finnish and local producers, including fish that has been responsibly caught.

“Way favours locally produced ingredients, although our menus do sometimes include exotic fruits. Of course, we primarily use Finnish berries in the summer, but in winter we may also serve persimmons, for example. Nevertheless, 80 percent of our ingredients are sourced locally. All of our breakfasts can be ordered as vegan versions, and the porridge we bake in our bread oven is made with oat milk,” Kähkönen says.

In addition to paying close attention to the origin of its ingredients, Way Bakery also takes care to eliminate waste and ensure that its operations are otherwise sustainable and energy efficient. The portions are smartly planned and well prepared, and the food is made in batches according to demand. Lauri Kähkönen believes that responsibility is a lot about small everyday things. Those who make food on a daily basis can make a big impact with their choices: ingredients can be ordered from suppliers in reusable packaging, and kitchen operations can save electricity and heat.

“Everything should be done as efficiently as possible and with as little waste as possible. For example, eggs do not need to be cooled by rinsing them under running water for 10 minutes,” Kähkönen points out.

As a restaurateur, Kähkönen is also interested in the environmental aspects of the property. The restaurant’s electricity is sourced from hydropower, and consumption is actively monitored using Helsinki Energy’s OmaHelen service. Kähkönen recently visited a new building that was modern, energy efficient and had solar panels on the roof to generate renewable electricity.

“In the future, it would be nice to operate a restaurant in this kind of building!”

Title
Sustainable restaurants in Helsinki
See all link
All sustainable choices
Card list
Description
The suppliers who have met the Think Sustainably criteria are marked with a green tab.
Simple liftup
Sustainable and long-lasting purchases in Helsinki
Show image on the left
Off
Show created/updated
Off
Show in search dropdown
Off
Teaser text
The more we eat vegetarian and vegan food, the better it is for the climate. Another basic principle is reducing and avoiding food waste. The choices we make when selecting the food we eat have a big impact on the carbon footprint.
Select any filter and click on Apply to see results