Eetu Ahanen
Lead text
Born in Berlin in 1778, architect Carl Ludvig Engel was assigned the task in 1816 of designing the state buildings of the new capital of the autonomous Grand Duchy of Finland. Travel back in time to the early 19th century and experience Helsinki as Engel would have seen it.

Cantonist School (today the Topelia buildings of the University of Helsinki)

These buildings were originally designed as a military school for the sons and orphans of Russian soldiers, who were referred to as cantonists. The educational purpose of the buildings can still be seen in the design of the main façade, as Ionic columns were typically chosen for school buildings. Constructed in the 1820s, the school soon made way for a military hospital in 1832. The buildings are now used by the University of Helsinki.
Unioninkatu 38

Old Clinic (today part of the University of Helsinki)

The Old Clinic was the first teaching hospital in Finland. Helsinki was one of the main ports of the Russian navy and began suffering from the spread of venereal diseases. Patients were treated at the clinic with arsenic and mercury, for example. Inaugurated in 1833, the building served as a medical facility all the way into the 1990s. These days the building houses the Faculty of Social Sciences of the University of Helsinki.
Unioninkatu 37

Do you feel like you are stepping into a Roman spa? The floor plan and symmetrical layout of the reading rooms suggest that Engel was indeed inspired by Roman spas when he designed the University Library. The centre point of the building is the domed hall with reading rooms leading off it. What is today the National Library of Finland is one of the finest examples of Empire-style architecture in Finland, and it attracts almost 200,000 visitors a year. The library was inaugurated in 1845.
Unioninkatu 36

Originally, an Orthodox cathedral was meant to be built at this location. Instead, a smaller Orthodox church was constructed to serve Russian civil servants, merchants and soldiers. The Holy Trinity Church is surrounded by trees in a typical park setting of the period. The church was consecrated in 1827.
Unioninkatu 31 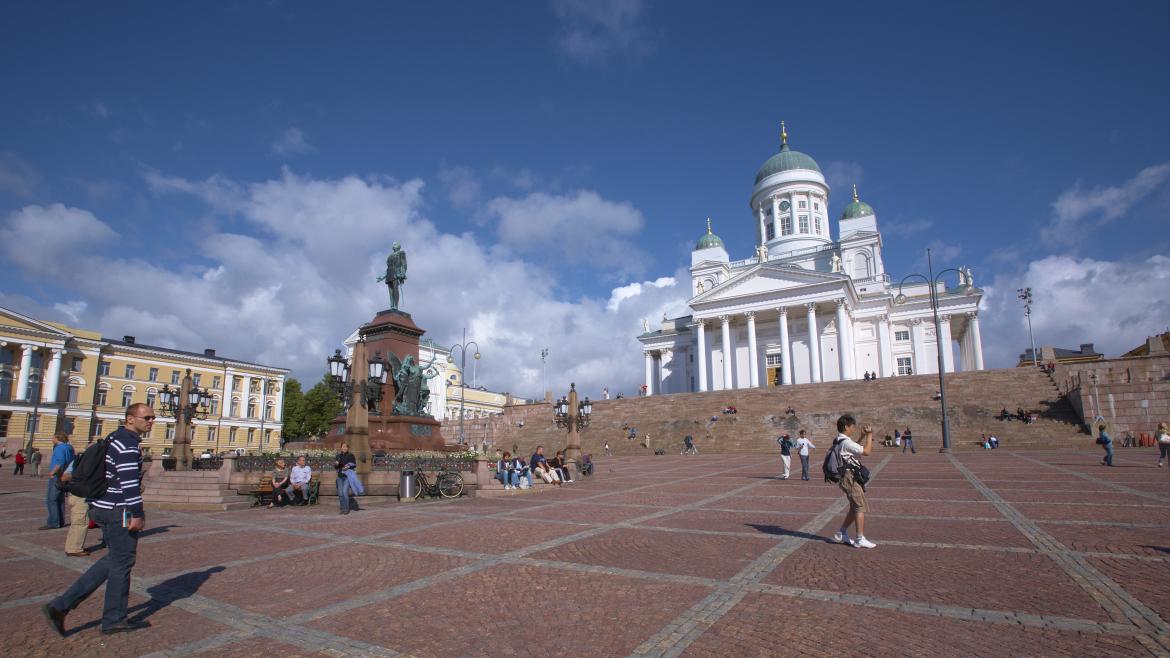 The appearance of Helsinki’s main Lutheran cathedral does not quite match Engel’s original design. For example, he designed an altar in the shape of a cross and adorned with paintings that was never realised. On the outside, the impressive steps leading up to the cathedral were not part of the original design. Engel himself did not live to see the completion of what was known as St. Nicholas’ Church up until Finland gained independence in 1917. Construction began in 1832 and was completed in 1852; Engel died in 1840.

The Senate combined the functions of the Cabinet and the Supreme Court in the autonomous Grand Duchy of Finland. The Senate was headed by the Governor-General of Finland under the Tsar and was separate from the Diet of Finland, which preceded the Parliament. The status of what is today the Government Palace can be seen in the design of the façade, where the numerous Roman motifs highlight its role as the seat of power. These references include the Corinthian columns and cupola, which was inspired by the Roman Pantheon. The building was constructed between 1818 and 1828 and housed the Senate from 1822 to 1918.
Snellmaninkatu 1

The Royal Academy of Turku, the only university in Finland at the time, moved to Helsinki in 1827 and was renamed he Imperial Alexander University in Finland the following year. Engel designed the Main Building as an integral part of Senate Square in the heart of the city, reflecting its importance. The architect tried to avoid too many similarities with the Senate on the opposite side of the square, but the two buildings are still very alike. The differences are in the details, such as the columns. Whereas Engel used Roman motifs for the Senate (today the Government Palace) to signify power, he used Greek motifs for the University to signify learning. Inside you can admire the three-storey tall main lobby, which was inspired by an ancient courtyard.
Unioninkatu 34

Over the years, Kiseleff House has served as a sugar refinery, Stockmann’s department store and the police department. Today it is a chic bazaar that houses fancy boutiques. Originally built in the 1770s with a gabled roof, it was given a new façade designed by Engel in 1818. He also designed the façade and interior for the nearby Bock House, the oldest building in the area dating back to 1763. Bock House served as the official residence of the Governor-General of Finland.
Unioninkatu 27 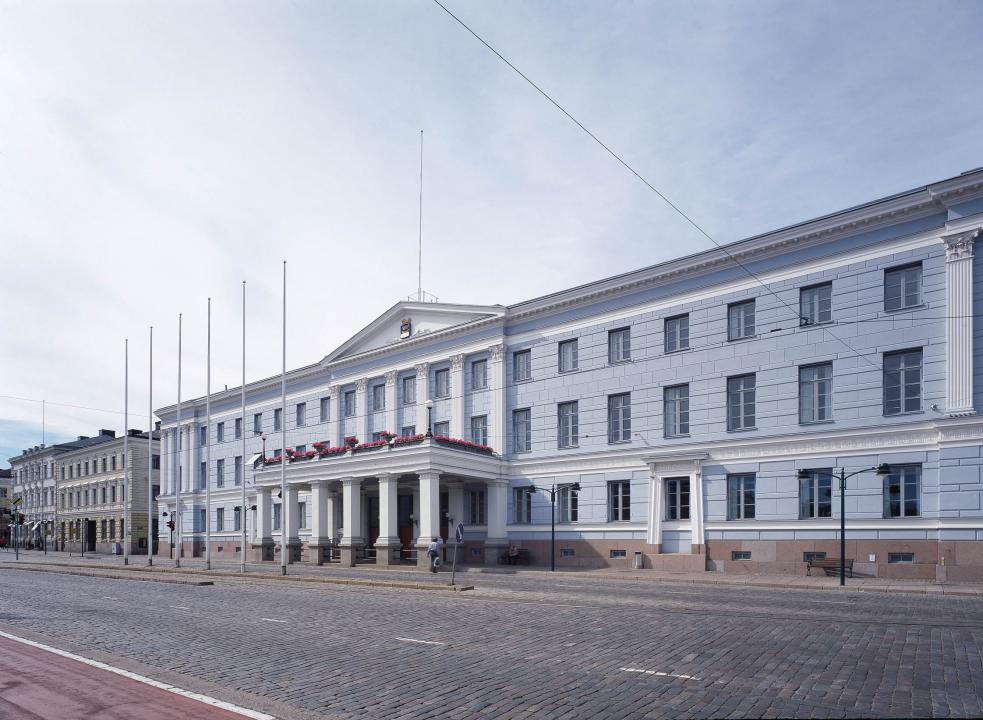 According to the original plans for Helsinki, this area was meant to serve as the park of the Imperial Palace, now the Presidential Palace. By order of the Tsar himself, however, the Main Guard House was built here in 1843. The building was used as the living quarters for the fire guards, whose task in case of a fire was to notify the main guard, who would then sound the warning drum and fire a cannon to warn residents of the danger.
Mariankatu 1

The first official monument in Helsinki was unveiled in honour of a visit by Tsar Nicholas I and his wife Alexandra Fjodorovna on 18 December 1835. The location in the centre of the Market Square was carefully chosen by Engel to serve as an emblematic landmark. The obelisk is made from Finnish granite.
Market Square

Originally built as a stately residence by the merchant Johan Henrik Heidenstrauch between 1816 and 1820, it was purchased in 1837 by the Senate to serve as the official residence of the Governor-General. However, Tsar Nicholas I decided it should serve instead as the official residence in Helsinki of the Tsar of Russia/Grand Duke of Finland, and the building became the Imperial Palace. Engel himself had wanted to design a new palace for the Tsar in Esplanade Park on the western edge of the Market Square or in Katajanokka, but the Tsar had the final word.
Pohjoisesplanadi 1

Completed in 1833, this building originally served as the Hotel Seurahuone, the cultural and entertainment centre of Helsinki. For example, Seurahuone was the venue selected for the premieres of both the Karelia Suite (1893) and the opera “The Maiden in the Tower” (1896) by legendary Finnish composer Jean Sibelius. The Lumière brothers also screened the first motion picture in Finland here in 1896. The hotel moved out in 1913 to make way for City Hall. The interior was renovated in the 1960s, but the façade is still as Engel originally designed it.
Pohjoisesplanadi 11 - 13 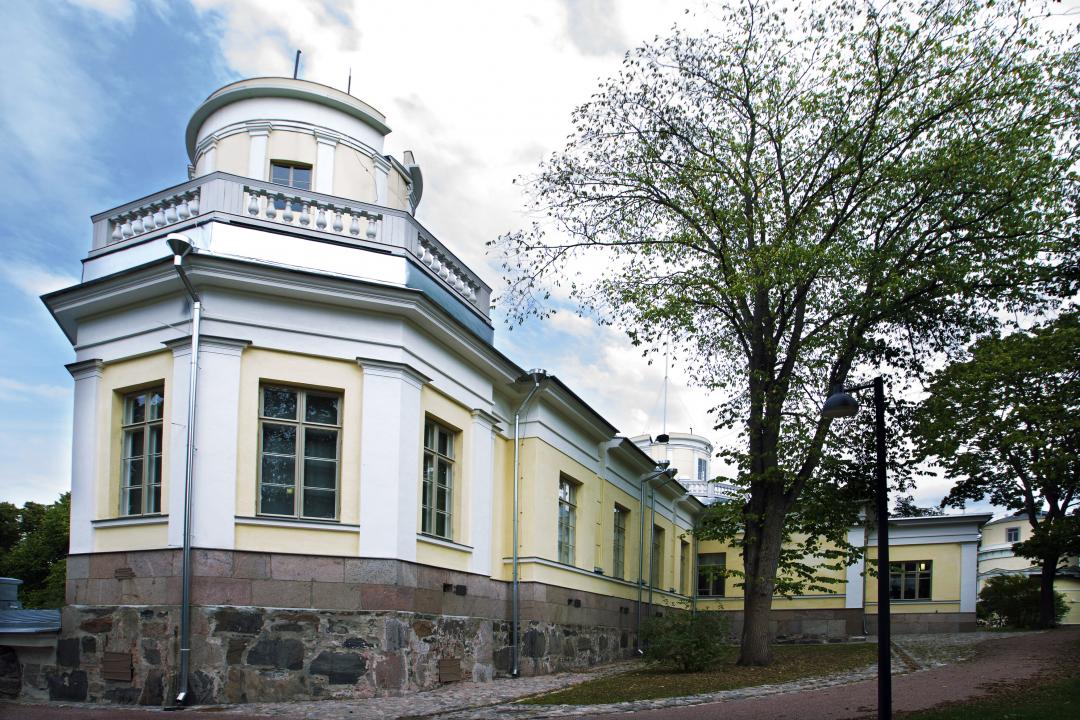 This building was one of the first private homes designed by Engel. It was commissioned by Gustaf Sundman, a merchant and sea captain, and completed in 1820. In keeping with tradition, the ground floor was reserved for retail premises and storage, and the living quarters were on the upper floor. The building housed the Michelin-starred restaurant G.W. Sundmans from the early 1990s to 2015. Nowadays you can find the new experimental Finnish restaurant Ultima from the same premises.
Eteläranta 16

Functionalism met Classicism in 1834. Astronomy was experiencing a technical revolution in the early 19th century, and the functional aspects of the observatory largely dictated its design. Engel in fact collaborated closely with Friedrich Wilhelm Argelander, Professor of Astronomy, who shares the credit for its design. The observatory was ahead of its time and served as a model for other observatories around the world for decades. For example, it was the first observatory in which revolving observatory towers were an integral part of the design.
Tähtitorninmäki (Observatory Hill)

Slightly removed from the centre, Engel designed the barracks for the Finnish Guards' Rifle Battalion, colloquially known as the Guard of Finland. Construction of the barracks was completed in 1822. The Officers’ Wing, which now houses the Ministry of Defence, has one of Engel’s most ornamental façades. The buildings were badly damaged during the massive aerial bombardments in February 1944, and reconstruction began in 1954 after an extended debate.
Kasarmitori

This merchant’s house was built between 1819 and 1821. Similar to Sundman House, which was designed and built during the same period, the ground floor had retail premises and storage areas, while the two upper floors had living quarters. Demand for rental apartments was considerable in Helsinki at the time, just as it is today, as the rapidly growing number of civil servants needed to be housed. The social hierarchy can be seen clearly in the façade of Cavonius House, as the floor with the highest status, the middle floor, is the most ornamental and tallest.
Pohjoisesplanadi 21

Designed by Engel in the Empire style and completed in 1822, this building was typical of the bourgeois homes of the period in terms of its size and interior. The high status of its intended resident, the Inspector General of the Military of the Grand Duchy of Finland, was nevertheless reflected in the details of the façade, including its columns and avant-corps (the jutting out parts). The building later served as the main building of the Imperial Alexander University, the official residence of the Governor-General of Finland, and even the headquarters of the Red Guard during the Finnish Civil War; it was nicknamed ″Smolna″ after the Bolshevik headquarters in the Smolny Institute of Saint Petersburg, and the nickname is still used to this day. Smolna now serves as the Government Banquet Hall.
Eteläesplanadi 6 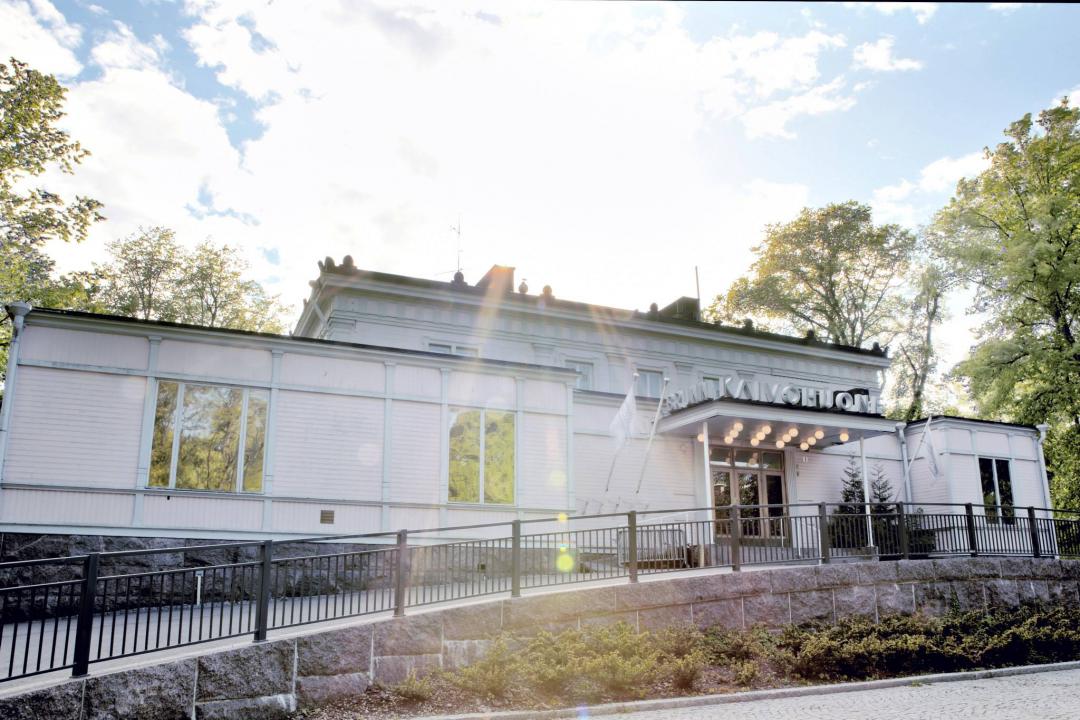 Kaivohuone
Show in landscape format
Off

The history of the Kaivopuisto park stretches back to the 1830s, when a spa was founded on the southern peninsula of Helsinki. Attractive wooden villas were built overlooking the park and were used to accommodate guests. The spa was especially popular among the Russian nobility up to the 1850s, during which time they had been prohibited from travelling outside the Russian Empire by Tsar Nicholas I. The rescinding of the travel ban after the death of Nicholas I in 1854 led to the eventual decline of the spa. Among the spa buildings designed by Engel, only the restaurant – Kaivohuone – has been preserved, and it remains popular to this day.
Iso Puistotie 1, Kaivopuisto

The wooden Old Church was built between 1824 and 1826 and was originally planned as a temporary building to serve the local parish while the Ulrika Eleonora Church in Senate Square was being demolished to make way for the new cathedral. The parish could not pay for the clocktower that Engel had designed, but the church itself and the cemetery gate still stand to this day. The cemetery was moved in 1829 to Hietaniemi, where Engel and his family are buried.
Bulevardi, Vanha kirkkopuisto (Old Church Park)

Finland’s first psychiatric hospital was also among the first of its kind in Europe. Construction began in the late 1830s and was completed in 1841. Engel designed the hospital with a view to providing the patients with sensible things to do in a calm and beautiful environment. The hospital is situated by the sea and surrounded by gardens. The hospital operated all the way until 2008 and now houses  around 170 small businesses, associations, artists, artisans, musicians and therapists.
Lapinlahti

The single-storey wooden main building designed by Engel was completed in 1831 and is now the gardener’s living quarters. The modest building was moved in the 1850s to make way for a new main building.
Kaisaniemi

The Union of Finnish-German Associations in Finland (SSYL) promotes awareness of the German language and culture in Finland, as well as Finnish-German relations. You can download a map of Engel’s buildings in Helsinki from the SSYL website.

Title
Visit Engel's architecture in Helsinki
Link
More architectural attractions
Location carousel
Simple liftup
Quick guide: Torikorttelit
Show image on the left
Off
Show created/updated
On
Show in search dropdown
Off
Teaser text
Born in Berlin in 1778, architect Carl Ludvig Engel was assigned the task in 1816 of designing the state buildings of the new capital of the autonomous Grand Duchy of Finland. Travel back in time to the early 19th century and experience Helsinki as Engel would have seen it.
Select any filter and click on Apply to see results