Jussi Hellsten
Lead text
These attractions remain the most popular ones year after year.

Helsinki is a city where the neoclassical meets the Art Nouveau. Wide handsome cobblestone streets run through the neoclassical city center where you will find boulevards with plentiful parks. The sights are only enhanced by the harbor, right in the heart of Helsinki, from where a number of the top tourist attractions are within walking distance.

Most of the top sights in Helsinki are accessible by foot or on a bike, and the city offers an excellent public transportation system that includes ferries to the islands and trains to other destinations in Finland. Apart from the stunning nature and archipelago Helsinki includes gems worth seeing such as museums, churches and other tourist cultural attractions.

Oodi is Helsinki's new Central Library and a living meeting place in the city centre on the Kansalaistori Square. Oodi is a venue for events, a house of reading and a diverse urban experience. It will provide its users with knowledge, new skills and stories, and will be an easy place to access for learning, story immersion, work and relaxation. Oodi is a library of a new era, a living and functional meeting place open for all.

Oodi is open 1.6.–9.8. Mon-Fri 8–20 and Sat-Sun 10–18. Most of the Oodi's services, spaces and devices can only be used restricted or not at all. For example, the occupancy rate of reserved spaces is kept at about 50 percent compared to normal time. Free entrance. Read more: oodihelsinki.fi
Töölönlahdenkatu 4

The new Amos Rex museums exhibition programme will extend from the newest, often experimental, contemporary art to 20th-century Modernism and ancient cultures. Amos Rex aims to present captivating and ambitious art refreshingly and exuberantly. A permanent exhibition with Sigurd Frosterus's post-impressionist art collection is also on display. Amos Rex is a meeting place for art and urban culture, consisting of new underground exhibition spaces, the old Lasipalatsi building ("glass palace") from 1936 and its Bio Rex cinema, as well as a vibrant event forum on Lasipalatsi Square, which serves as the roof of the exhibition hall. The goal of the new museum is to produce unique experiences and surprising encounters

The newly renovated Olympic Stadium is delightfully dashing and fantastically functionalist. The Helsinki Olympic Stadion, built in 1938, was designed in functionalistic style by the architects Yrjö Lindegren and Toivo Jäntti. The Olympic Games were held in 1952 in Helsinki. Today the Olympic Stadium hosts both national and international sporting events and outdoor concerts. The Stadium Tower is 72 meters (235 feet) high and at the top you can admire the urban landscape and all of central Helsinki. The Finnish Sportsmuseum is also located at the Olympic Stadium as well as a restaurant, Bistro Stadion.

The Cathedral, by Carl Ludvig Engel, rising on the northern side of the Senate Square is the stage of national and academic festive services and one of the most popular tourist sights. The church is part of Helsinki's Empire era centre and a landmark for those arriving by sea. It has become the symbol of the whole of Helsinki. Earlier called St. Nicholas Church and Great Cathedral, the current main church of the Helsinki Diocese was completed in 1852. Sculptures of the twelve apostles guard the city from the roof of the church. Exhibitions at the Crypt (Kirkkokatu 18), in summer also a souvenir shop Cathedral Shop.

Open daily 9-18 (not during services and other church events), except Wed 9-17 and Sun 12-18. Check exceptions: helsingintuomiokirkko.fi
Unioninkatu 29

The Senate Square and its surroundings form a unique and cohesive example of Neoclassical architecture. The square is dominated by four buildings designed by Carl Ludvig Engel (1778-1840): Helsinki Cathedral, the Government Palace, the main building of the University of Helsinki and the National Library of Finland. A statue of Alexander II (1894) stands in the middle of the Senate Square. Helsinki Cathedral is arguably Finland's most famous and photographed building. The oldest stone building in Helsinki is the Sederholm House located on the southeast corner of the square. Today the building hosts the Helsinki City Museum. The Esplanade park and the Market Square are just a block away. The Senate Square also hosts a sound installation called the Sound of the Senate Square. It is a modern version of the European glockenspiel and can be heard every day at 17.49 as it travels from one building to the next. The composition runs for 5 minutes 18 seconds and is composed by Harri Viitanen and Jyrki Alakuijala.

The Old Market Hall in Helsinki has served its customers since 1889. Merchants sell all sorts of cheese, fish, shellfish, vegetable, fruit and cakes to spices, coffee and tea. They are also more than happy to help with any special orders. Here you can also find the smallest Alko shop for wines and beverages, as well as cafe's and restaurants.

Helsinki Zoo is home to more than 150 animal species and almost 1000 plant species that show the diversity of nature. Helsinki Zoo is one of the few zoos located on an island. The zoo was established in 1889 which makes it one of the oldest zoos in the world. Helsinki Zoo also participates in the work to protect the habitats in the original homes of the various species. The rhino sign will take you to the animals that belong to the zoos' shared protection programme. On the island you'll also find a souvenir shop and cafés & restaurants.

The world famous composer Jean Sibelius' (1865-1957) monument by Eila Hiltunen is located at the Sibelius park. It was unveiled 7 September 1967. The Sibelius Monument, resembling organ pipes, is made of welded steel with over 600 pipes and with the bust of the composer on one side. The monument is one of Helsinki's most popular statues and one of the most well-known tourist attractions.

Public sauna and restaurant complex in Hernesaari district on the southern tip of Helsinki. The complex includes a traditional Finnish smoke sauna, two other wood-heated saunas, a year-round terrace and a restaurant. It is possible to take a swim in the sea, also in winter. There are separate changing rooms and shower facilities for men and women but as the saunas and other public areas are mixed, this means that customers are respectfully asked that swimming costumes are worn at all times.

A Unesco World Heritage Site, Suomenlinna sea fortress is one of the most popular tourism destinations in Finland. Suomenlinna is also a suburb of Helsinki with around 800 residents. The fortress was shaped by three historic eras when it helped to defend first Sweden, then Russia and ultimately Finland. There are six kilometers of walls, 100 cannons, exciting tunnels and beautiful parks in the fortress. There are also museums, guided tours, events and restaurants in Suomenlinna. Private guided tours of the fortress, in several languages, can be booked in advance ([email protected]). Possible public guided tours are announced in the events calendar on the Suomenlinna webpages. The fortress is easily accessed all year by public transport (HSL) ferry from the Market Square. The travelling time is approx.15minutes. In summer, from May to September, also JT-Line waterbuses operate to Suomenlinna.

Suomenlinna island is open all year. Please see the opening hours of the services on the island on the webpage of Suomenlinna.fi

These days food and souvenirs are sold at the Market Square, but it’s also a popular place to sit and enjoy coffee and sugar donuts – either by the waterfront (curiously named the “Cholera Pool”) or inside the iconic orange coffee tents in wintertime. The Tsarina’s Stone itself is the oldest public monument in Helsinki and reflects the many layers of history in the nation’s capital.

Excavated directly into solid rock, the Temppeliaukio church is situated in the heart of Helsinki, at the end of Fredrikinkatu. Because of its special architecture, the church, completed in 1969, is one of the main attractions in Helsinki. The church hall is covered with a dome, lined with copper and supported on the rock walls by reinforced concrete beams. The interior walls are of rugged rock and rubble wall. Before noon, the light spreads from the row of windows surrounding the roof periphery to the altar wall, where an ice-age crevice serves as the altarpiece. Due to its excellent acoustics the church is a popular venue for concerts.

The Seurasaari island provides a nice setting for outdoor recreation, sun worshippers and walkers. The tame ducks, swans and geese swarming around the bridge welcome everybody. Having crossed the white wooden bridge a visitor can't help running into the happy little squirrels of the island. At the Open-Air Museum of Seurasaari the traditional Finnish way of life is displayed in the cottages, farmsteads and manors of the past four centuries that have been relocated from all around Finland. The Kalevalakehto Installation (2010) by students from American and Finnish schools of architecture and design is situated on the south bank of the island and is ment for relaxing and enjoying the silence. At Seurasaari you'll also find restaurant Seurasaaren Kruunu, Cafe Mieritz, kiosks and a beach (nude-, except for Wed & Sun). Barbecuing is also possible at the grill by the Festival Ground kiosk.

Linnanmäki Amusement Park has entertained fun loving people since 1950. The Amusement Park has a wide selection of fun rides, from ultra scary to more easy-going. The wooden rollercoaster from 1951 remains the most popular ride. Linnanmäki has also many arcade halls with the latest games as well as an outdoor stage presenting entertaining performances.

In the summer of 2020, the number of visitors will be limited, but Linnanmäki is prepared for safe entertainment. The area is wide and safety distances will be taken into account in all activities. Most kiosk and restaurant outlets normally serve outdoor eaters, and it is recommended especially this summer. Open starting from 12.6. daily 11-21. linnanmaki.fi
Tivolikuja 1

Allas Sea Pool is a marine spa and an oasis of urban culture right at the heart of the city. It offers new ways of enjoying the Baltic Sea, just a stone's throw away from the Market Square and other main attractions. Allas is open all year round, providing unique experiences and recreational activities for townies and travelers. The marine spa has three saunas, two warm water pools and one sea water pool, to which the water is pumped from nearby streams and filtered clean. In addition to these, an outdoor gym, restaurant & café -services, guided wellness- & sports lessons and culture events are on offer. 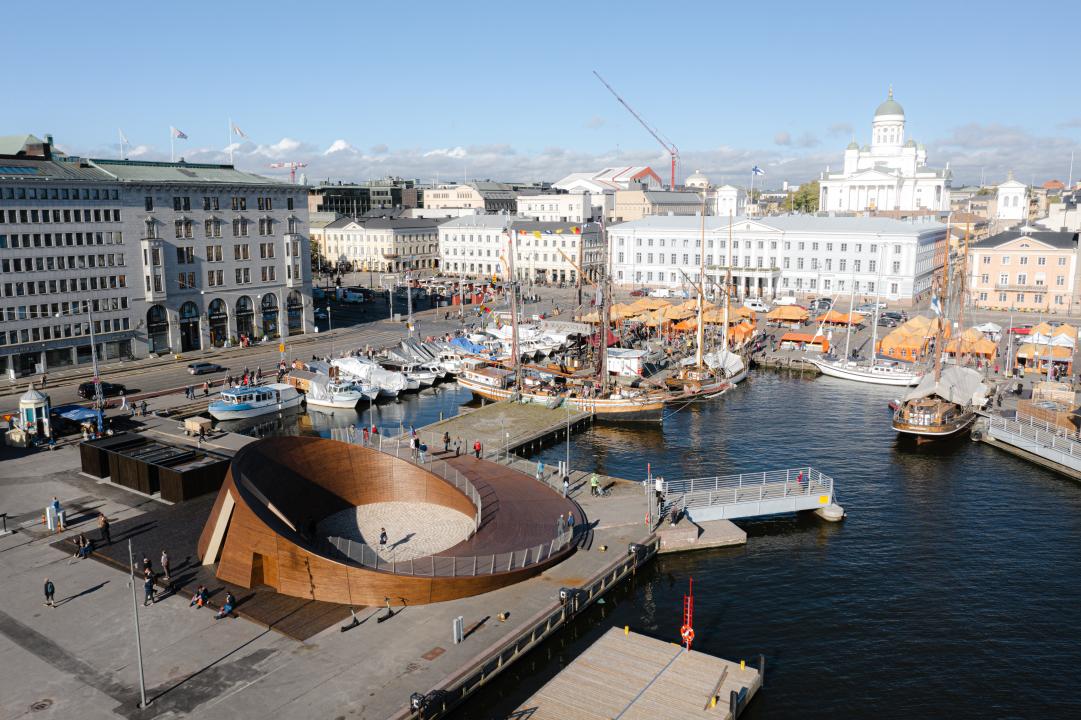 Helsinki Biennial / Pyry-Pekka Kantonen
Show in landscape format
Off
Title
Top 15 sights in Helsinki
Location carousel
Simple liftup
What to do in Helsinki? 10 ideas!
Show image on the left
Off
Show created/updated
Off
Show in search dropdown
On
Teaser text
You can always find unique things to see in Helsinki! Just in one day, you can enjoy city's archipelago, go sightseeing and visit Helsinki's best attractions.