Helsinki City Hall and its wild layering of collages

Private collection
Lead text
Anitra Lucander’s colours as a component of Aarno Ruusuvuori’s architecture at Helsinki City Hall deserve to have their story told. They embody the principle of equality and democracy that characterises modernism. Besides, where else can a janitor’s booth be called a collage?

In a photograph taken in the late 1960s, artist Anitra Lucander stands with her team on the roof of the Lion Block, the block of historical buildings that includes Helsinki City Hall. Lucander in her poplin coat stands in a determined pose with her hands on her hips and Helsinki Cathedral in the background.

I imagine her in the same way standing atop the windy Observatory Hill, gazing down towards City Hall and pondering its colour. It should be light blue, just the shade it is now. Not yellow, as it was during the time of the city architect Carl Ludwig Engel, and not pink, as it was painted during the pre-war dance era of the Seurahuone hotel. Light blue. It is a colour that connects Helsinki’s face to the sea in winter and summer – somewhere in between the grey of winter and the bright blue of summer.

There was heated debate in Helsinki over the reconstruction of City Hall, sparked by an architectural competition and its winning proposal, which would have demolished the old Seurahuone building. Ultimately, it was decided to keep the much-loved building, and its façade provided the face of the new buildings within the city block.

The colour of the building had undergone changes even in earlier stages, perhaps because it stands so prominently in the centre of Helsinki regardless of which direction you approach it, from land or sea. Prior to its inauguration in 1833, there had been lively debate over the colour of what was to be the Seurahuone hotel; in addition to Engel's proposal, light yellow, the board of construction had discussed light green or yellowish green. Even grey was mentioned in the minutes. But light blue just feels right. It is apparent in the way the colour always seems to have been there, so perfectly does it fit into the landscape and the ever-changing light of Helsinki, the seldom gentle weather that whips along the coast.

When Aarno Ruusuvuori’s architectural office made the first alterations to the traditional building in 1965–70, he commissioned a colour scheme from his trusted expert in colours, Anitra Lucander. Lucander was known for her sure sense of colour, and her artistic mode of expression was well suited to visualising architecture.

Lucander had studied at the Free School of Art and risen to the top of the Finnish avant-garde after her breakthrough exhibition at Galerie Artek in 1955. Her stylistic path began with stark concretism but continued in a freer lyrical-colourist abstract direction. She made extensive use of the collage technique and also created large textile interpretations in which wild geometric compositions nestle on a soft material. In Lucander’s expression, the line between the abstract and the representative is wavering, but colours are always the cohesive force at the core.

The friendship and collaboration between Aarno Ruusuvuori and Anitra Lucander began with the Groupe Espace collective of artists and architects in the late 1950s and led to major joint projects in the 1960s. The colour scheme of Lucander’s City Hall comprised exterior colours, furniture colours and interior colours. Through her handprint, colours formed spatial collages, defining shapes and reinforcing perspectives within the spaces. City Hall offers numerous perspectives that, when sought, simplify the spaces into colourful collages. For example, the long view down the corridor is not just a corridor but a spatial colourist-abstract work of art. 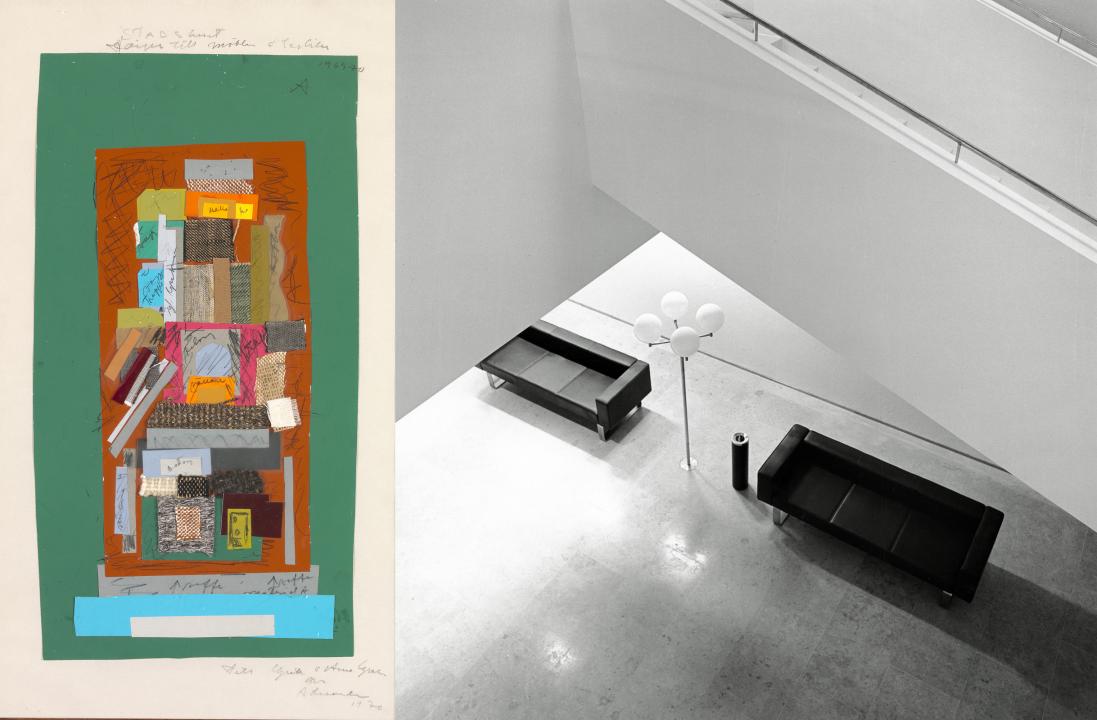 Over 30 colours seamlessly connect the Empire period with the 1960s

We know from Lucander’s sketchbooks that she designed the colouring for Ruusuvuori’s new buildings by taking inspiration from the old, strolling in the surrounding area and in the historic parts of the block, taking photographs and using them for colour inspiration. She implemented her colour scheme in a way that was characteristic of her: as a collage in which the elements are energetically formed into their geometric shapes – as a work of art in which graphic forms create a rich atmosphere.

In her design, a palette of bright colours seamlessly connect the Empire period with the 1960s, with blue-grey being the exception and shades of orange-yellow the rule. Comprising more than 30 colours, the design is very skilfully nuanced and detailed: the wall-to-wall carpeting, the tiles in the toilets, the laminated interior surfaces, the furnishings and even the numbers in the cloakroom were given their own colour.

Anitra Lucander’s design has a lot of bright colours that imaginatively challenge the idea of pastel harmony in Engel’s centre and the Lion Block. The main colours also have many bright repetitions. Lucander is known to have been influenced in her art and colour design from her travels to Paris in the 1950s. Later, even longer journeys were the main source of her colour inspiration.

Lead text
Each place has its own special colour scheme. It depends on the air and the building material. From Athens I remember ochre, whereas Istanbul is grey-blue. Paris too is grey-blue.

Images inside: Christian Jakowleff
Show in landscape format
Off

Not much is known about the interior of the original Seurahuone hotel. All we know of the colour chart is the orange hue of the dining room, the yellow of the billiard room, the pink of the lobby and the purple in one of the salons. Also in the adjoining Bock House, bright colours dominate the rhythm of the interior. Some of the shades from these spaces that have since been demolished or repainted can be found in Lucander’s design. Although the ideals of modernism swept away many of the original spaces and buildings in keeping with the spirit of the times, the original Empire-era main hall was retained. Its shades of orange and green connect the space to the renovated corridors that speak a completely different design language.

An article of unknown origin glued into Lucander’s sketchbook quotes the artist herself: “It is dangerous if colours are used too much,” says Lucander. “People get bored, and as a result, colours are not used at all again for a while. The wrong choice of colours in particular can provoke boredom. In Helsinki, the use of colours has been exaggerated in some respects.”

Even though most of the selected colours are anything but modest, their composition is spatially thoughtful and subdued. Bright shades appear in many places as clusters between wide white surfaces. Sometimes they can be noticed only when light reflects colour onto the opposite wall.

As one walks through City Hall, Lucander’s spatial colour collages emerge almost surreptitiously as one perceives them from different angles. The light green hue on the right wall forms a couple with the light turquoise hue around the corner of the next room. Note also the brilliant colour combinations in the janitor’s booth, where the structured glass adds life and depth. Descending the main stairs, one’s eyes are drawn to the blue scale, stealthily but also strongly. The bright colours in the main meeting room seem almost anarchic – nothing describes our Nordic democracy better than the fact that the Mayor’s table is the same bright green laminate as any children’s table in a kindergarten from the 1970s! 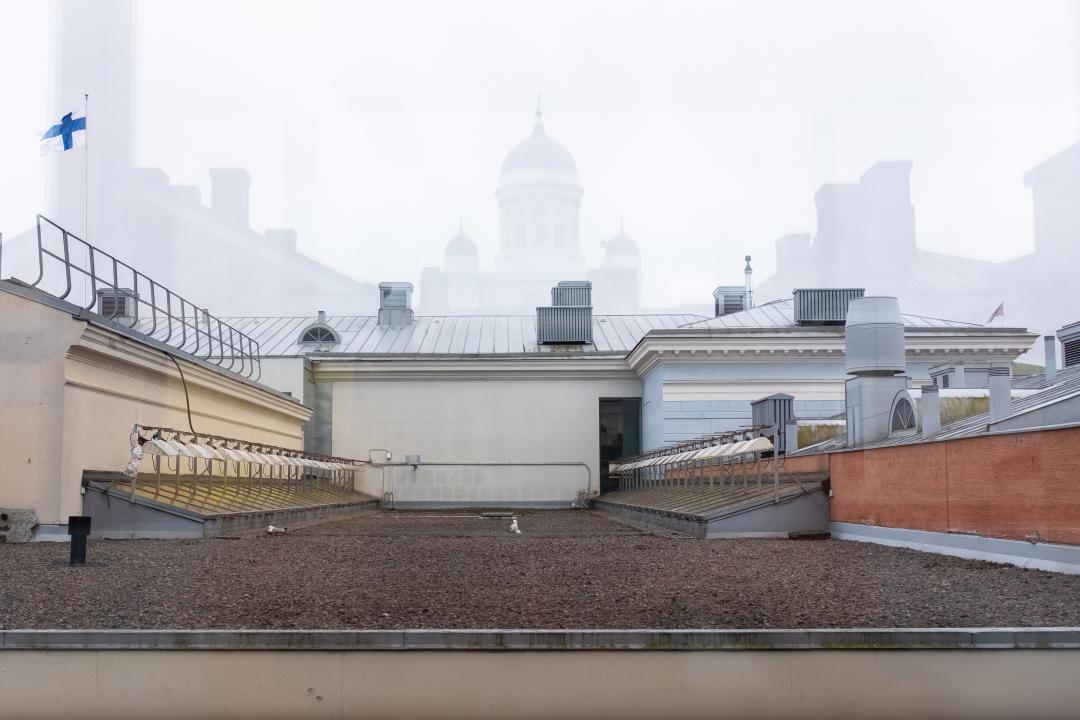 Colours transport you to other places

Despite all this, Lucander is not even mentioned in some histories of Helsinki City Hall, and if she is mentioned, it is only in a sentence, not an entire article. Why? Because colour design is considered uninteresting? Or because Lucander was a woman? Or because the working group is not as important as the master in the canon of history as it is so often written?

Lucander’s colour scale, the thinking behind the design, and the wild layering of her collages are topical right now. They provide us with a method of seeing more of the environment in which we live. Her story also nicely sums up the idea that things are seldom finished or final; instead, the moment in which we live is formed from layers and snapshots of the past. Colours are an endless inspiration because they change and live with the light.

By strolling around the historic quarter and taking photographs of the details – as Lucander did – we can find moods that transport us to other places. The frenzy and layering of Lucander’s collages also reveal the multidimensionality of our city, the many international stimuli and the people who make up this city. Colours are universal, but the experiences they create are individual.