Angel Gil / Amos Rex
Lead text
Helsinki's museum scene ranges from stately national institutions in the heart of the city to city run museums in Helsinki's satellite cities. Noteworthy additions to the whole are quirky private museums, which can be found in converted city flats and the gardens of private villas on the outskirts of town. From modern and urban to traditional and pastoral, Helsinki's museums cater to anyone's taste. Here is a selection of art museums not to be missed.

The foundation. Housing an impressive backlog of art from the 1750’s onward, the Ateneum is the collective memory of Finnish art. It’s collections spans over 4000 paintings and 700 sculptures. Housing some of the most iconic 19th century paintings by celebrated Finnish pioneers such as Akseli Gallen-Kallela, Hugo Simberg and Helene Schjerfbeck (a notable exhibition of Schjerfbeck’s work was organised last year in co-operation with London’s Royal Academy of Art), the Ateneum has in recent years successfully invigorated its reverential profile by presenting surprising large-scale installations by Finnish artist Kaarina Kaikkonen in its foyer and neighboring park, curating interesting smaller exhibitions from its collections – like the excellent small exhibition of the idiosyncratic enfant terrible of Finnish art, Olli Lyytikäinen’s (1949-1987) work in 2019  –  and showing a social conscience: in 2017 the museum hung a large banner on its facade proclaiming “Refugees Welcome”, thus showing support for people displaced by the migrant crisis of 2015.

Note! Ateneum has been closed due to renovations and will reopen in early 2023.
Kaivokatu 2

Designed by US architect Steven Holl, Kiasma has since its opening in 1998 been the hub of what is trendy and forward-looking within the Finnish art world. The building’s bold architecture is structured like a funnel, drawing you in to the upper floors. Although trendy, Kiasma follows its own path and is very open-minded. Celebrated Finnish contemporary artists like Eija-Liisa Ahtila, Iiu Susiraja, Mika Taanila and Erkki Kurenniemi nestle comfortably with such well-known international names like Jonas Mekas, Mona Hatoum or Robert Mapplethorpe.  A nice balance of international and Finnish art is always on show, and themed exhibitions cover unexpected ground. Proof of Kiasma’s self-generating public interest can be seen in how the larger public has embraced recent colourful exhibitions by Choi Jeong Hwa, Grayson Perry and Shoplifter (Hrafnhildur Arnardóttir). An immersive piece called The Visitors by 2019 Ars Fennica winner Ragnar Kjartansson drew a record crowd during its final weeks, and is proof of Kiasma’s ability to attract larger audiences from outside the traditional world of art.
Mannerheiminaukio 2

The third part of the Finnish national galleries alongside Ateneum and Kiasma, the Sinebrychoff's lovely town villa is Finland’s only museum focusing solely on European art from the 14th century to the early 1900’s – even including a Rembrandt. Based on a collection accumulated by brewing magnate Paul Sinebrychoff (1859-1917), the building also has an impressive second floor showing the living quarters of the Sinebrychoff family. The collection of antique furniture and objets d’art is second to none.
Bulevardi 40

The latest addition to Helsinki’s museum scene is perhaps its boldest yet: a subterranean amorphous space that has within it’s first two years since 2018 housed exhibitions ranging from Team Lab’s immersive artscapes and Lonneke Gordijn and Ralph Nauta’s Studio Drift to more traditional retrospectives by the likes of Rene Magritté and Finnish painter Birger Carlstedt (1907-1975) – which also housed a reconstruction of an art deco styled café designed by Carlstedt, Le Chat D’Or, originally run by Carldstedt’s mother. Situated under and within the courtyard of the celebrated 1930’s functionalist building Lasipalatsi by Viljo Revell, Amos Rex is a thinking-outside-of-the-box concept by JKMM architects. The protruding domes create a cavernous and very spacious large room, which is highly adaptive and malleable. Run by the association Konstsamfundet (the sole inheritor of founder Amos Andersson (1878-1961), Amos Rex is a privately run museum – which is where one of its’ strengths lies. True to its unconventional architecture, Amos Rex has also pushed the envelope with extraordinary and bold conceptual pieces that grow very much out of the quirky architecture of the museum (teamLab, Studio Drift). The opening exhibition drew  240 000 curious visitors, putting the new museum and its audience through the wringer: people queued for hours in the cold winter air to enter the museum, which in itself is something worth mentioning.
Mannerheimintie 22-24 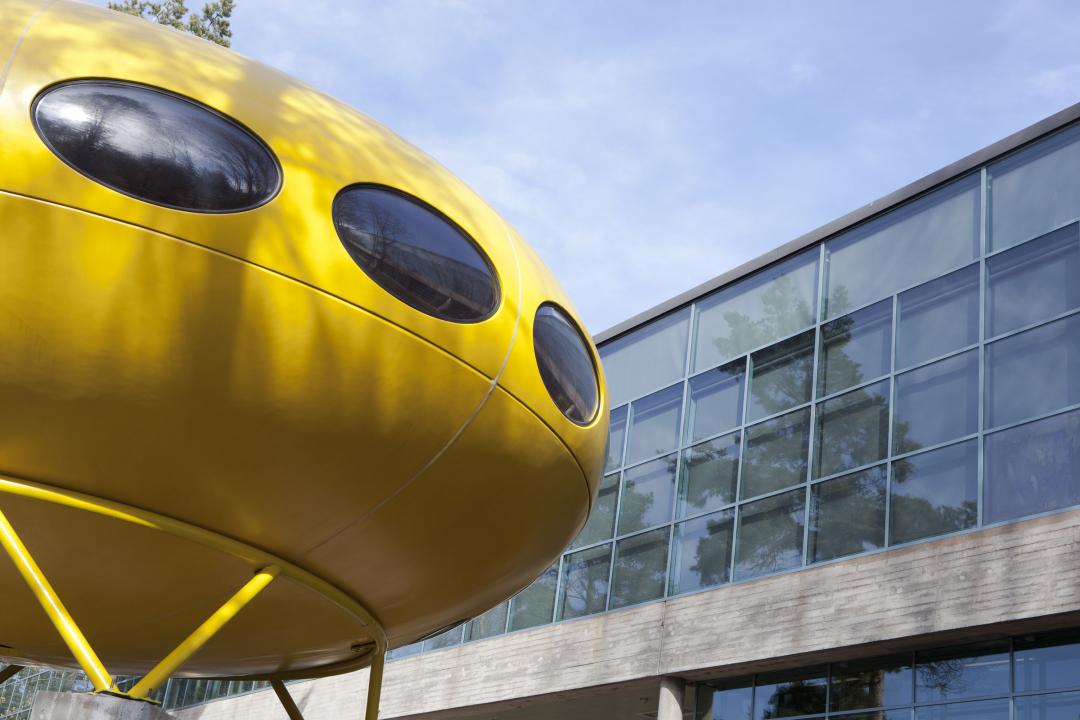 1928, the building was specifically constructed for this very purpose, and houses a large Sculpture Hall and two large rooms originally designed for paintings. Partly financed by the City of Helsinki, the Kunsthalle is an integral part of the city’s art life. The skylights provide natural light and the architecture is subdued and beautiful. Recent exhibitions by David Hockney, Ugo Rondinone and Anu Tuominen have brought colour – and new visitors –  to the contemplative interiors. The Kunsthalle also has a quirky museum shop Kioski and Finnjävel, a fearless restaurant focusing on a new angle on Finnish food run by the celebrity chefs Henri Alén and Tommi Tuominen.
Nervanderinkatu 3

Opening its doors in the Tennispalatsi building since relocating there from a much smaller building in Meilahti, HAM re-invented itself in these new surroundings. Partly taking its new moniker from Moomin-creator Tove Jansson’s mother Ham, the museum shares a building with a large multiplex cinema theater and a few restaurants, making it an attractive spot to spend an evening. Three different spaces cater for different scale exhibitions, most notably Ai Weiwei and Pavel Althamer in the most recent past. For those on the lookout for anything related to Tove Jansson, HAM is of particular interest, as it houses the Tove Jansson Gallery, where in addition to two large frescoes from the 1940’s, a selection of smaller works and reproductions nestle with photographs taken by the artist’s brother, Per Olov Jansson (1920-2019).
Eteläinen Rautatiekatu 8

Situated in an old printing house designed by professor Aarno Ruusuvuori for the publisher Weilin & Göös, EMMA benefits from large floor plans and spacious interiors. Built around a collection bequeathed by the Saastamoinen foundation (around 2600 pieces), the museum also houses the art collection of the City of Espoo (another 2600 pieces) and has recently included the prestigious collection bequeathed by the renowned designer couple Tapio Wirkkala Rut Bryk foundation. The WeeGee exhibition centre also houses a plethora of smaller museums: the Espoo City museum, the toy museum Hevosenkenkä, the Finnish Clock Museum, and perhaps most interestingly, the Helinä Rautavaara museum presenting the collections of this eccentric Finnish explorer. A sculpture garden outside shows large scale works, as well as a ufo-like Futuro building designed by the architect Matti Suuronen in 1968.
Ahertajantie 5, Tapiola, Espoo

Founded in 1994, The Vantaa Art Museum reinvented itself in 2016 and focused particularly on urban art forms: street art, graffiti and performance. The renamed Artsi museum is the smallest of the three city-run museums of the Helsinki Metropolitan area, but by no means insignificant. In recent years, the museum has staged interesting and groundbreaking exhibitions curated by Finnish conceptual artist and painter Jani Leinonen, that even garnered favorable reviews in the international art magazine ArtReview.
Paalutori 3, Myymräki, Vantaa 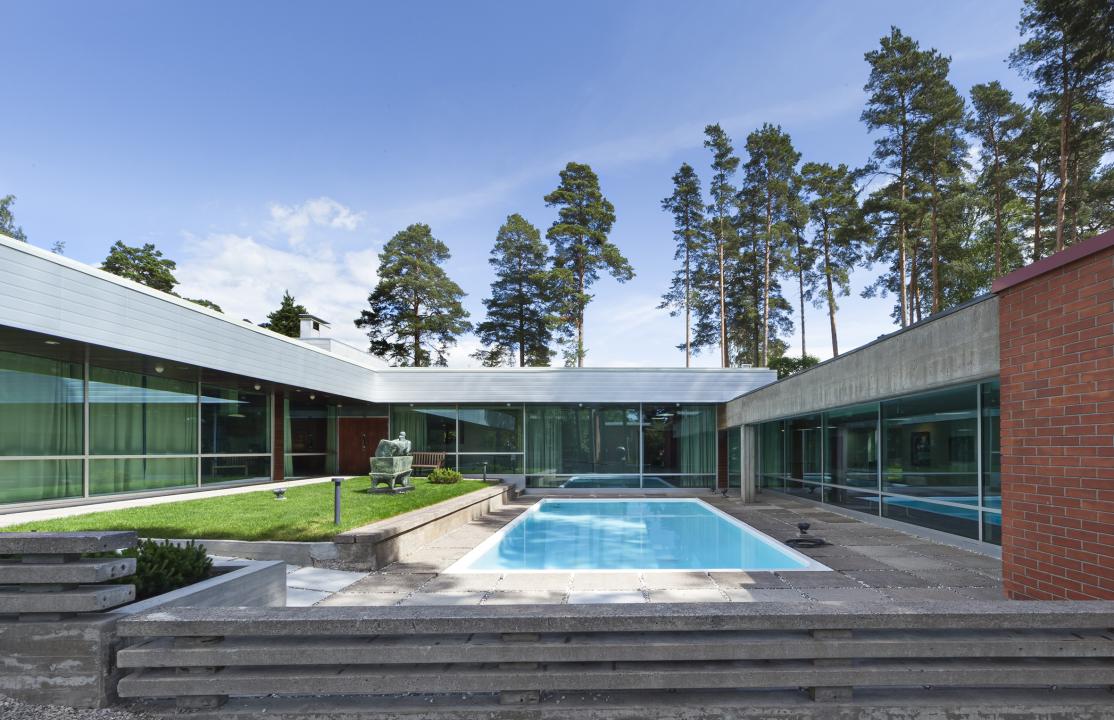 The Didrichsen Art Museum is a touch of European finesse in the Helsinki museum scene, the closest you'll get to Denmark's Lousiana Museum of Modern Art in Finland. Centered around the functional modernist building designed by famed Finnish Architect Viljo Revell, this is a combination of a museum wing and the former private home of art collectors and patrons, the Danish-born Gunnar Didrichsen (1903-1992) and his Finnish wife Marie-Louise Didrichsen (1913-1988). The collection includes works by the most prominent names of Finnish modernism, as well as works by their international counterparts, such as Picasso, Legér, Kandinsky and Giacometti, to name a few. The sculpture garden surrounding the building is noteworthy for two sculptures by Henry Moore, among others. Avid collectors of pre-Columbian and Oriental art, the Didrichsens's also amassed a fine collection, which is permanently on show in the basement of the museum. Coming exhibitions include a rare collection of Vincent van Gogh's drawings, which opens in the fall.
Kuusilahdenkuja 1

Situated close to the Didrichsen museum, Villa Gyllenberg is a somewhat similar concept, if only slightly more traditional in tone. Housing an impressive collection of European art and miscellanea from the 16th and 16th century, the bulk of the collection consists of works from the golden age of Finnish painting, with a particular emphasis on the works of Helene Schjerfbeck. The former home of collectors and patrons Ane Gyllenberg (1891-1977) and his wife Signe (1896-1977), the villa in an intriguing combination of functional modernism and reverent Classicism peppered with tasteful antiques.
Kuusisaarenpolku 11

Housed in a penthouse apartment in the modernist neighborhood of Töölö, Taidekoti Kirpilä is the former residence of collector Juhani Kirpilä (1931-1988) and his partner, Karl Rosenquist. Focusing mainly on the first half of the 20th century, the collection is somewhat traditional in scope, centering on portraits, landscapes and figurative themes. In recent years, Taidekoti Kirpilä has also started to offer queer tours of the collection, which seems more than fitting, as Kirpilä and Rosenquist were one of the first more prominent gay couples in Helsinki's cultural scene from the early 70's onward.
Pohjoinen Hesperiankatu 7