Vasikkasaari - a local island for adventurers

110th Street Productions
Lead text
Vasikkasaari, located on the west side of Santahamina in Helsinki, is a recreational island of about 18 hectares. The island is available for the city residents’ recreational use, and it also has summer residents with small cabins. 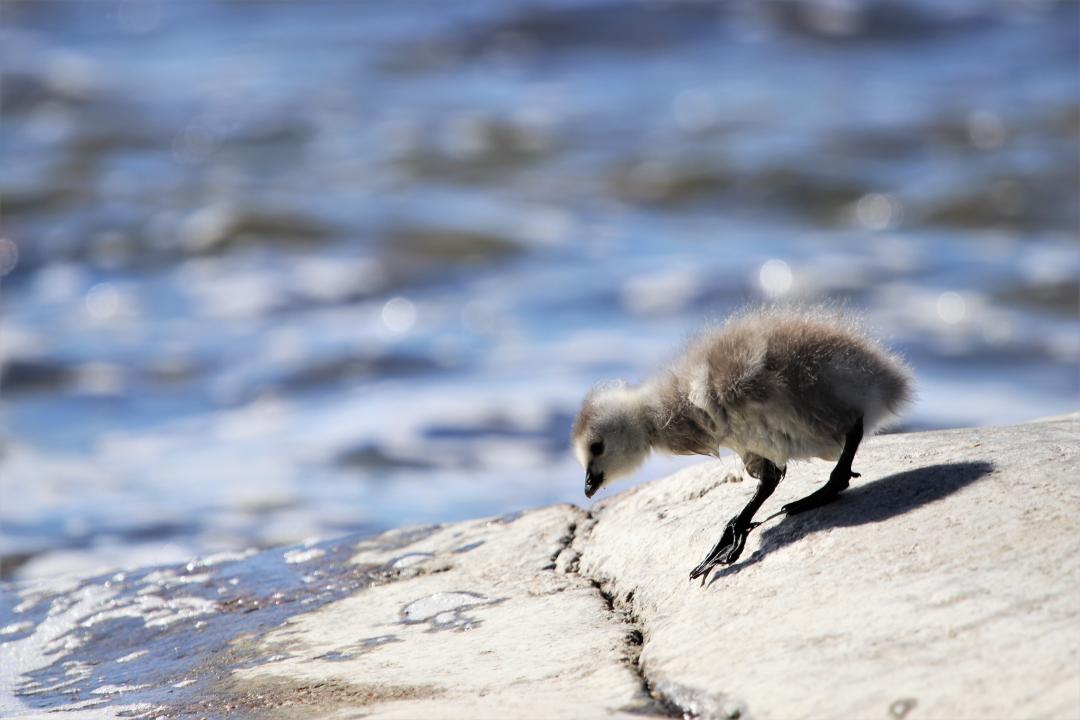 The island has been in recreational use for a long time. In 1808–1917, it was used as a storage island of the Russian army and, later, the Finnish Defence Forces. This can be seen in the island’s nature as the small patches of plants some that have escaped from gardens and as some eastern alien species. Today, the island has about 50 small cabins, mostly located in the northern and eastern parts of the island. The northern part of the island is also connected to Sauna island, which is operated by a private sauna entrepreneur.

A small valued meadow can be found on the west side of the island, close to the Commandant’s House or ‘the White House’, as it is also called. The meadow features plants such as Vernal sedge (Carex praecox), lesser burdock (Arctium minus) or Russian dock (Rumex confertus), which are alien species from the east and tend to stay close to the house thanks to the runoff nutrients and the gravelly soil that is slightly more nutrient-rich. Rugosa rose (Rosa rugosa) and Purple foxglove (Digitalis purpurea) are the most notable garden escapees on the island.

Vasikkasaari is in an archipelago environment, which means that its nature is delicate, rugged in appearance and low in nutrients. There is an overgrown pond in the middle of the island, and the surroundings of this former pond differ from the rest of the island’s rugged environment, forming an moist oasis. The pond is surrounded by the remains of a structure known as ‘the wall of China’. Vasikkasaari has a view of both the Suomenlinna Sea Fortress and the silhouette of the City of Helsinki. 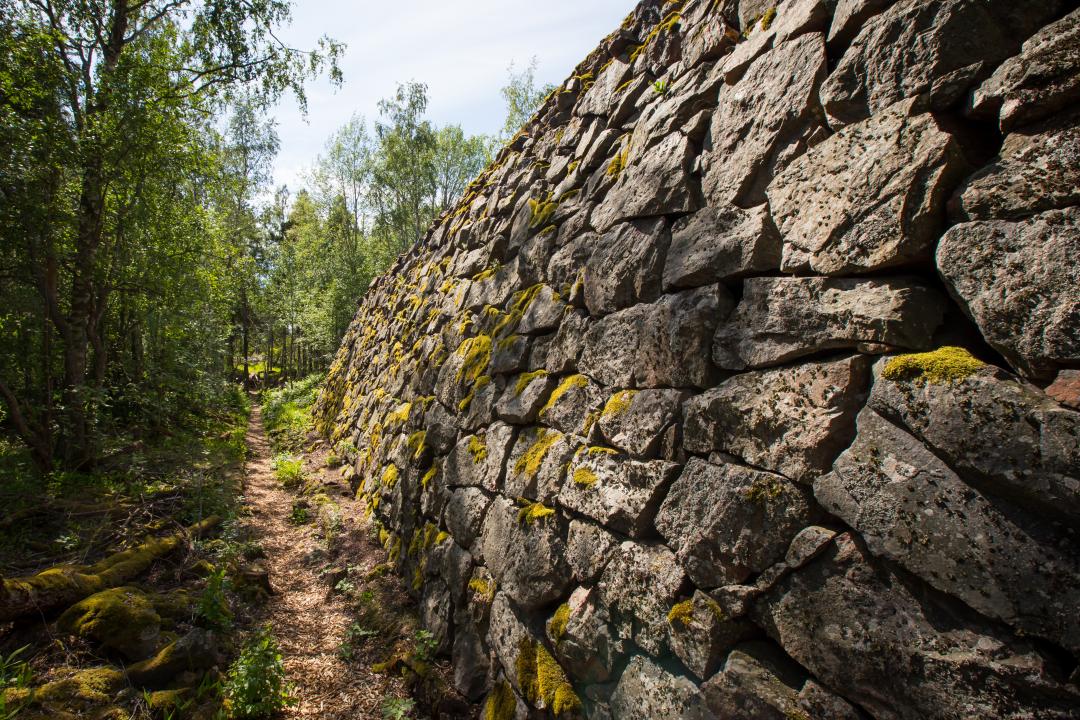 Vasikkasaari features two guided pathways: a main route that presents the island’s historical sites and a ‘moment for yourself’ well-being trail in the western part of the island. The trails can be walked in any order and do not need to be completed in full. Vasikkasaari is not suitable for people with limited mobility, as the pathways are narrow and occasionally rocky.

The spirit of history trail

The spirit of history trail tours mostly the centre of the island. The trail is about one kilometre long and takes you to the island’s historically significant places and the best scenic spots. The trail has seven route points that have a guide text you can listen to or read on the mobile map at citynature.eu.

A moment for yourself well-being trail

A moment for yourself well-being trail is in the western part of Vasikkasaari, travelling along the island’s coast line. The trail is little under one kilometre long, but the terrain is quite slow to walk, along a narrow pathway with small elevations. The trail has six route points that have a guide text you can listen to or read on the mobile map at citynature.eu. You can follow the instructions based on your own feelings and at your own pace. The trail takes about half an hour, depending on your speed. 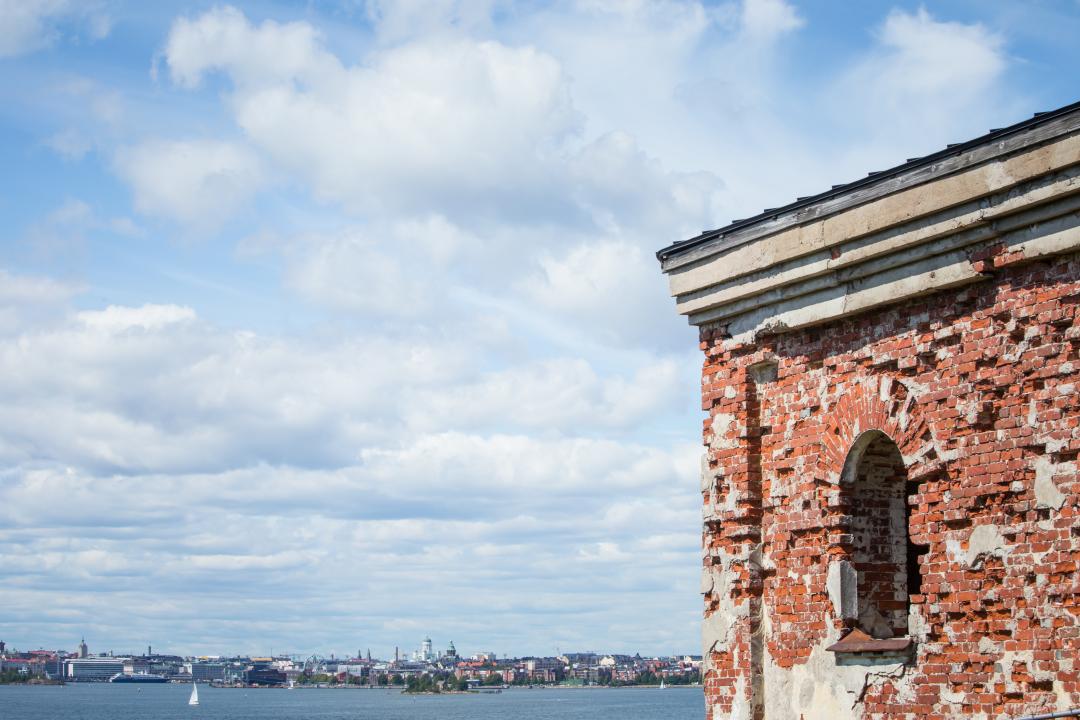 Calvholmen and Kalfholm were the first names of Vasikkasaari in mid-17th century, when it was part of the village of Santahamina. This name indicates that it was used as a pasture, as were several other islands in the Helsinki archipelago. The history of Vasikkasaari can be roughly divided into three different stages: Russian Vasikkasaari (1853–1918), Finnish Defence Forces’ Vasikkasaari (1918–1946) and summer cabin island (1946–). In the 18th century, Vasikkasaari was still included in Suomenlinna’s fortification plans, but these plans were never implemented.

The Russian army started to build a storage facility on Vasikkasaari during the Crimean War, and Vasikkasaari’s brick buildings and stone structures date back to this time. In 1863, Russians transported log warehouses to the island from Korkeasaari, Mustikkamaa and Taivallahti. The storage area in the middle of the island was surrounded by a stone wall. Planks were placed on top of the wall for guards to walk on while they guarded the buildings. The large brick guardhouse, ‘Commandant’s House’, was completed at the top of the island in 1870. A text carved into the rocks on the west shore stands as a reminder of the Russian times: ‘1898 byl v karau I. Sidorov’; in 1898, I stood guard, I.Sidorov. Many plants counted as invasive species from Russia also remind us of the Russian era. Russian dock (Rumex confertus) and Vernal sedge (Carex praecox) grow on the rocky hill under the guardhouse.

Many military goods were left behind the storage buildings on Vasikkasaari when they came into the possession of the Finnish government in 1918. The island housed a guard unit of soldiers. Vasikkasaari was thoroughly destroyed in an explosion on 8 February 1919. A large container of naphtha exploded and caught fire, and, as a consequence, some ammo stored on the island started to explode, too. The explosion could be heard as far away as Tallinn and Heinola. The wooden buildings on Vasikkasaari were fully destroyed in the explosion. The brick guardhouse was also destroyed. The bad luck continued when a large quantity of oil leaked into the sea in April, and the negligent guard operations led to an internal legal dispute within the army. Oil was collected from the sea even at the shoreline of the Market Square. Vasikkasaari was not used much after the explosion.

In spring 1945, SKDL (the Finnish People’s Democratic League) requested a summer place by the sea in Santahamina from the Ministry of Defence. The Ministry did not agree to this at first, but, in the end, the island was rented out in 1947 despite the opposition of the navy. Two families employed by the Defence Forces lived on the island, and the island also housed a large container of naphtha. It was rare for an island governed by the Defence Forces to become available to civilians. Similar summer homes were established on other army islands, too. In 1953, a part of Vasikkasaari was rented to Valtion Virkailijain Liitto ry association for state officials. A fence was built between these two areas. At the beginning of the 1960s, there were 172 summer cabins on Vasikkasaari, most of them in SKDL’s area. The island was rented from the Defence Forces, and only the cabin-owners and their guests were allowed to access the island. The City of Helsinki acquired ownership of Vasikkasaari in 1963. Today, there are 51 cabins on Vasikkasaari.

Learn more about the history and nature of Vasikkasaari island at citynature.eu. 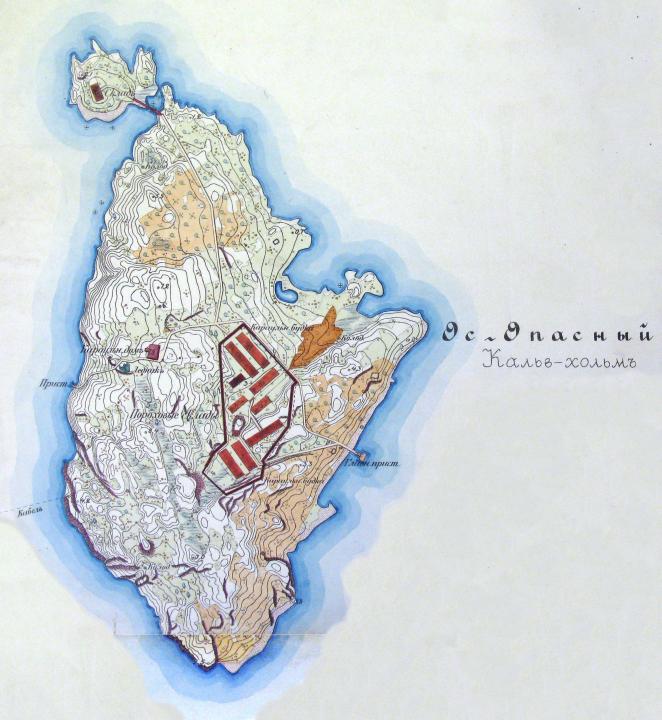 Jan Strang
Show in landscape format
Off
Title
Other Helsinki islands
Location carousel
Simple liftup
Pihlajasaari island - a traditional recreational island
Show image on the left
On
Show created/updated
On
Show in search dropdown
Off
Teaser text
Vasikkasaari, located on the west side of Santahamina in Helsinki, is a recreational island of about 18 hectares. The island is available for the city residents’ recreational use, and it also has summer residents with small cabins.
Select any filter and click on Apply to see results