When admiring Helsinki’s Art Nouveau architecture, it seems as if the world of the Finnish national epic, the Kalevala, has come to life with its intricate trees, flours and forest creatures. Many of the details, the windows, stairwells and doors, are beyond compare in their beauty. With all its fairy tale qualities, Art Nouveau in Finland assumed an even more political role compared to other countries in the way it strengthened the national identity.

Entire neighbourhoods in Helsinki exude the magnificent forms, colours and materials of the Art Nouveau movement that flourished in the late 19th and early 20th centuries. Helsinki is indeed a unique city of Art Nouveau architecture on the global scale, boasting no less than 600 “Jugend” buildings – more even than in Barcelona or Brussels.

The decorations on the gables of this beautiful pink building called Ihantola (Wonderful Place) are inspired by the motifs of old Finnish churches. These patterns, in turn, inspired many of the designs that can be found, in a stylised version, on the National Romantic edifices of Helsinki. Like many of the apartment buildings in the Kallio area, Ihantola was erected by a group of workers.
Viides linja 18

There is no better way to take an Art Nouveau break than to stop for a while at the café in Jugend Hall. Its vaulted ceilings, stone pillars and painted walls are the perfect backdrop for the most surprising variety of sculpted birds and beasts. Painted friezes run along the walls and under the arches, and a vast fresco adorns the back part of the hall. Inside, all is harmony and nature, but as you enter the building, take notice of the two stone chairs and the table in the entrance hall: the pauper on one side, holding his head in his hand, and the rich man counting money bags on the other announce loudly and clearly what may happen to anyone who sets foot in a bank.
Pohjoisesplanadi 19

Olofsborg is interesting not only because of its volume and proportions, its granite base, its abundance of turrets, oriels and other historically-inspired elements including crenelated corbels and artificial ramparts, but also for the beauty of its lush surroundings. The whole of Kauppiaankatu is filled with art nouveau buildings – most are national romantic, some are of a more international style. Olofsborg is easily recognisable by its yellow facades and its distinctive tiled cupola.
Kauppiaankatu 7 – Katajanokankatu 1 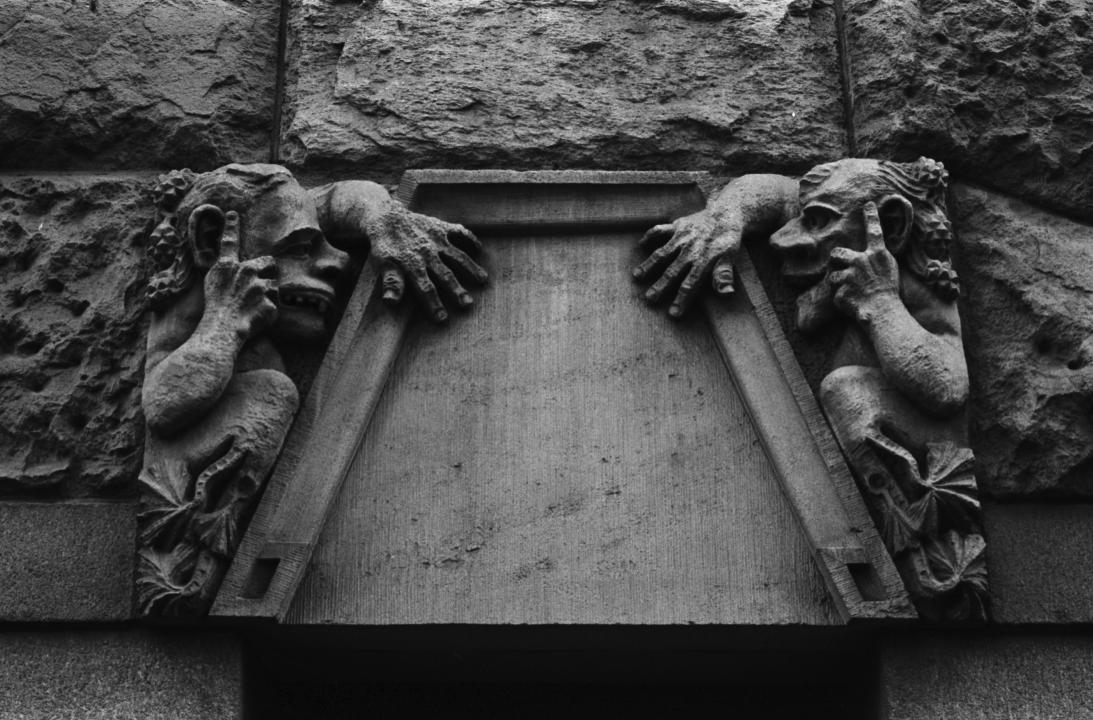 This building is impossible to miss, as it is in the heart of the downtown area. It can be considered a total work of art. The omnipresence of stone and wooden sculptures on the façades and inside are impressive, as is the use of wood in the interior construction. The building was designed to house the Pohjola fire insurance company, and many of the decorative elements allude to fire (bears holding torches, etc.). Bears, squirrels and other animals adorn the façades, along with various mythological forest inhabitants from Nordic folklore. Pohjola, in the Kalevala, is the evil land of the North. Symbolically, the ornaments on the façade represent the bad luck that could befall clients should they fail to take out insurance from the company. The toothy soapstone sculptures at the entrance are by Hilda Flodin.
Mikonkatu 3 – Aleksanterinkatu 44

Old Vallila is not a building but a neighbourhood. Though it is slightly off the beaten track, it is easily accessible by tram and well worth a visit for those interested in wooden architecture. This area was planned and built during the Art Nouveau period, and it heralds the age of standardisation and garden cities – Nordic style. Here, the streets are lined with standalone homes or duplexes with tin roofs and timber frames. Gardens at the back are filled with picnic tables and flowers. The area was planned to house the surge of workers moving to the city and searching for living quarters. It bears a cosy village atmosphere. Here, more modern elements, such as symmetrical façades, rows of windows with refined wooden grilles and metal awnings typical of late 19th and early 20th century architecture, charmingly combine with the rustic air of wooden houses

The Helsinki Railway Station is an emblem of the town, and though it is more Modernist than National Romantic, it was built by the nation’s most famous architect, Eliel Saarinen, who had pioneered Finnish Art Nouveau and set the country’s architectural trends for a decade or more. Its striking volumes and decorative elements can easily go unnoticed in the hustle and bustle of everyday life. The ticket hall, especially, with its decorated vaults and open space, is a place of beauty. It is a reminder that sometimes we should take a moment to stop and look more closely at the places we usually run through. 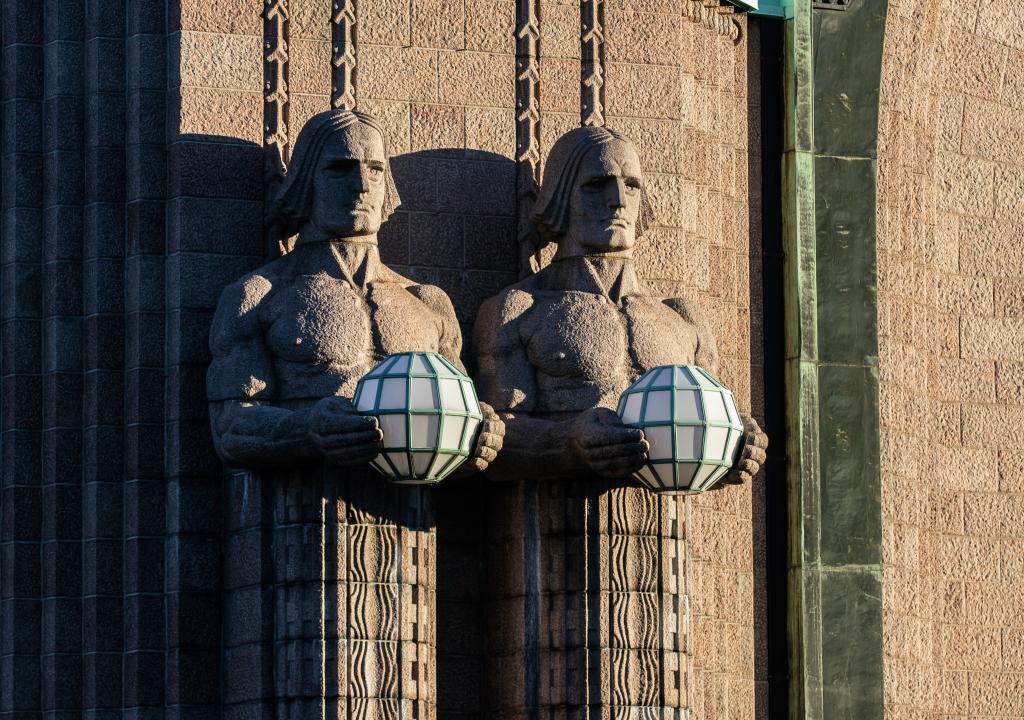 This very large and imposing edifice, with its dark facade, corner tower and rounded cupola, is original in that its owner, the music dealer Herman Walentin Schalin, who was blind, took an active part in the construction of his building. Many ornamental elements were handcrafted to meet his requirements. The decorative, organic motifs on the façades, for example, have unusual relief, and the ironwork and woodcarving on the doors are particularly intricate. Note the way each door is different and how the patterns, though relatively abstract, evoke elements of nature and the traditional techniques and handicrafts that were being celebrated in Finland at the turn of the twentieth century
Kapteeninkatu 11 – Tehtaankatu 9

Today used as a hotel, Vanha Poli, the former Polytechnic Students’ Union, is one of the few national romantic buildings whose interior is easy to explore. From the outside, the building looks like a fortress squeezed between two modern houses. On approach the eye is drawn to sculptures of strange creatures set over the door and on the pillar. Inside, the vaulted ceiling in the foyer brings a church to mind. The fireplace on the ground-floor hall is particularly decorative. Ascending the stairs to the second floor, the visitor first meets a small hunchback figure carved from wood, and at the top of the stairs silent wooden bears have gathered in a circle. The abundance of stone, wood and painted ornaments, as well as ever-present animal figures, mythical creatures, and warrior-like humans, create an atmospheric, otherworldly setting, just as national romanticism was expected to do.
Lönnrotinkatu 29

One animal that seldom appears on buildings is the frog; yet, here is an edifice which seems to glorify this small amphibian. This quirky, unusual plasterwork will stir your imagination. Who is the evil looking sea creature guarding the gate with his tongue sticking out, and who is that strange-looking toad-princess surrounded by her frogadmirers on the mouldings? Has the princess turned into a human (or perhaps something else) in the upper layer of the window bar? Finally, admire the lizards and the frogs standing in the shade of the lotus flowers, and how the gate is home to two snakes, topped by more lily pads. Restaurant Wellamo is located in this house.
Vyökatu 9

Simple liftup
Top highlights of Helsinki architecture
Show image on the left
Off
Show created/updated
Off
Show in search dropdown
Off
Teaser text
Entire neighbourhoods in Helsinki exude the magnificent forms, colours and materials of the Art Nouveau movement that flourished in the late 19th and early 20th centuries. Boasting no less than 600 “Jugend” buildings – more even than in Barcelona or Brussels.
Select any filter and click on Apply to see results