TANSSIN TALO © Tuomas Uusiheimo
Lead text
Where in Helsinki can you see the most brilliant non-verbal performing arts? What venue is so exquisite that it’s worth visiting even at the risk that you don’t understand a word?

Helsinki offers extremely high quality, topical and low threshold performing arts in the form of contemporary dance, live art, modern circus and visual theatre. Drama fans can also enjoy both Finnish plays and visiting theatre productions from abroad with English subtitles. With a metro ticket, you can also get to stages in neighbouring Espoo in no time. 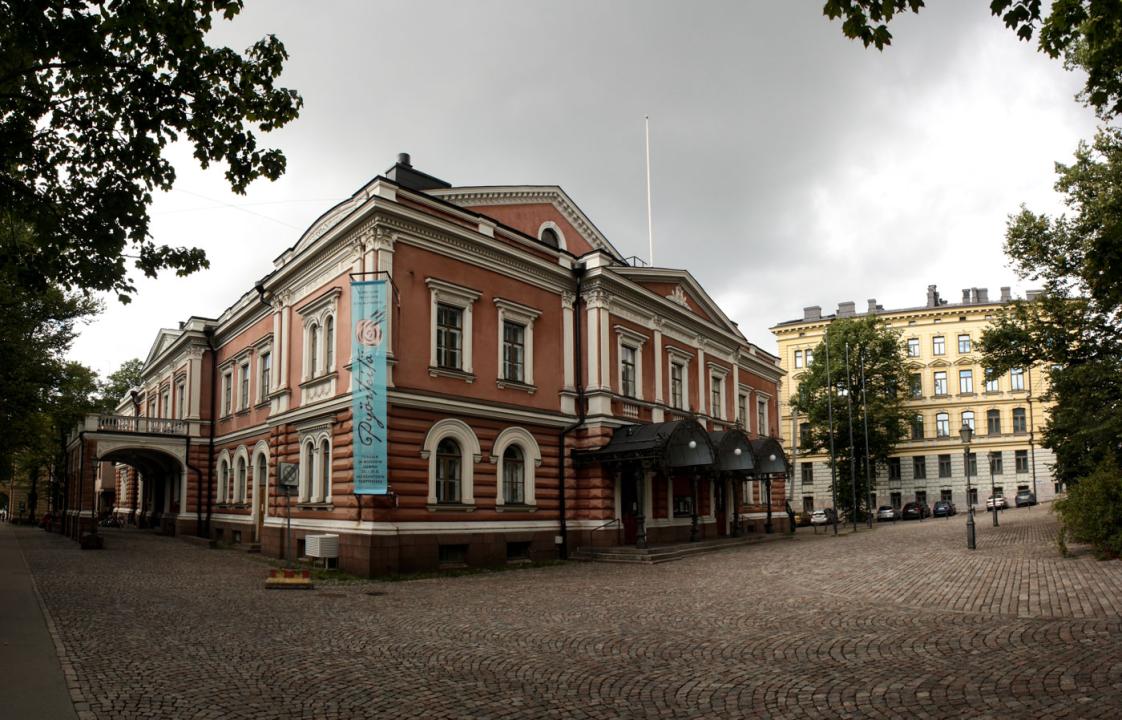 The Alexander Theatre is without doubt the most historic stage in Finland. It originally housed Helsinki’s Russian Theatre and later, after independence, the first Finnish National Opera. The theatre is not big but all the more beautiful. These days it stages high-quality entertainment and dance performances. You can see both world-class classical ballet and the newest street dance stars from the UK, Italy and Russia. The Alexander Theatre is also home to the Compañía Kaari & Roni Martin, Minna Tervamäki and the Tsuumi Dance Theatre.
Bulevardi 27, Kamppi

Cirko can be found at the urban culture centre Suvilahti, which is just a short distance from the Kalasatama metro station. With its industrial gasometers and graffiti wall, Suvilahti is worth a visit on its own, but its main attraction is nevertheless Cirko. Modern circus is becoming the next big thing in Finnish art exports, so Suvilahti is the place to go to catch the big names of today and the future. Cirko collaborates actively also with other performing arts groups, including modern puppet circus and contemporary dance acts, so its programme has something for everyone.
Kaasutehtaankatu 1, Sörnäinen 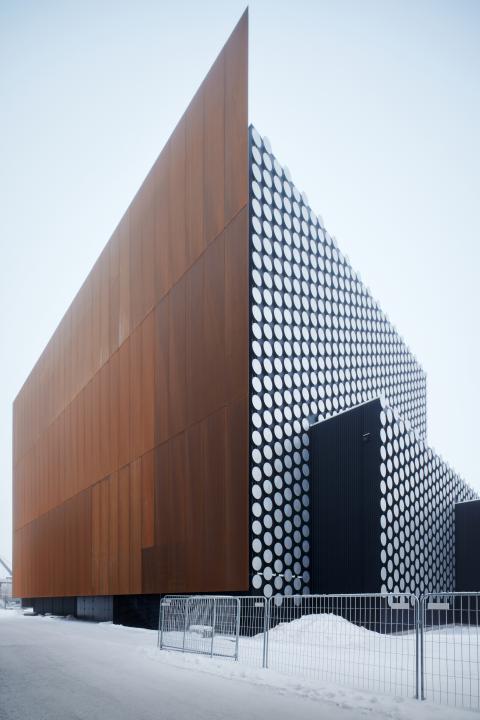 Finland’s first and long-awaited event and performance space dedicated entirely to dance will open in February 2022 at the Kaapelitehdas (“Cable Factory”) cultural centre. Dance House Helsinki fills the demand for stages dedicated to the art of dance in Helsinki and promises to bring audiences and dance closer together by presenting the diversity of dance art and culture. The repertoire forms a cohesive whole created together by Finnish and international dancers.
Kaapeliaukio 3, Ruoholahti

Espoo City Theatre is the most active host of foreign theatre productions in Finland and even labels itself as the International Theatre of Finland. The theatre’s repertoire comprises its own productions, as well as visiting productions from Finland and abroad. Accordingly, all performances are subtitled in English with only a few exceptions, making it possible for visitors to enjoy Finnish plays in a unique way. Espoo City Theatre is situated in Tapiola and can be reached by metro from Helsinki Central Station in just 15 minutes. Espoo City Theatre has a couple of stages in different addresses, please check the correct one from the company's website.
Espoo Cultural Centre, Kulttuuriaukio 2, Tapiola 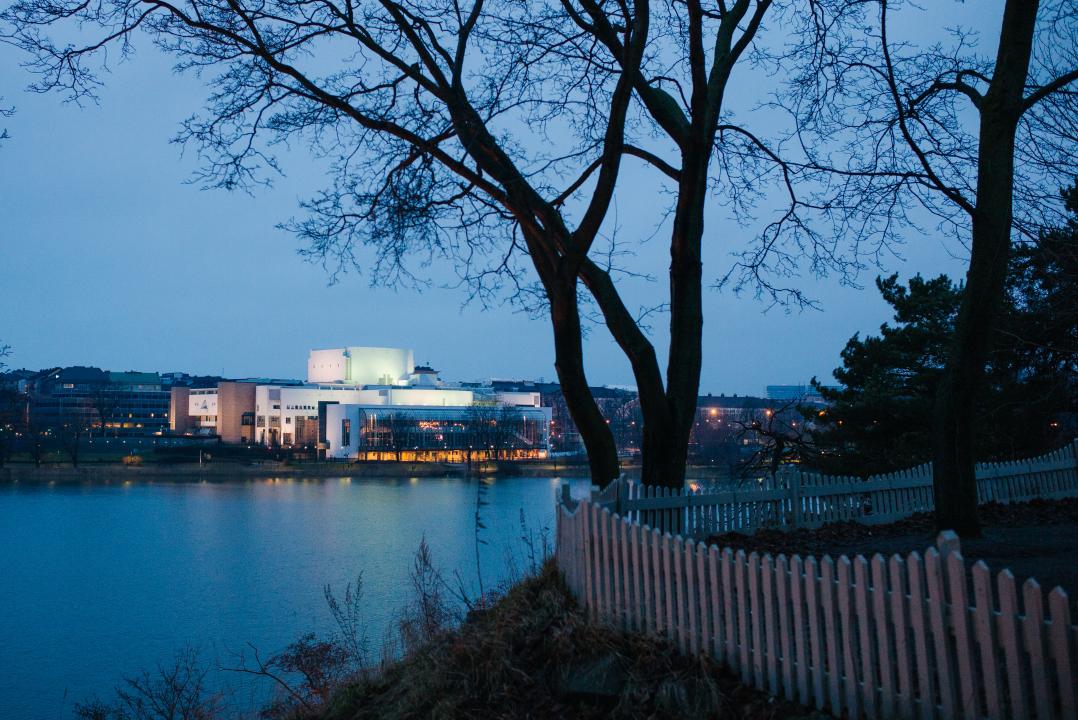 The Finnish National Opera and Ballet on the Töölönlahti bay is the only professional opera house in Finland, so it presents the cream of the cream – not only in terms of singers, dancers and musicians, but also when it comes to costumes, sound design and scenography. The artistic director is opera singer Lilli Paasikivi and artistic partner and guest conductor Esa-Pekka Salonen. In 2022 we get to celebrate the centenary of the Finnish National Ballet.
Helsinginkatu 58, Taka-Töölö

If you are interested in architecture, check out the programme at the Finnish National Theatre. Although its repertoire focuses on Finnish-language plays, it also presents dance performances and international productions. The main stage is simply magnificent.
Läntinen teatterikuja 1, Kluuvi

The Dance Theatre Hurjaruuth’s spectacular Winter Circus productions have become an institution and an annual tradition among many families in Helsinki. Hurjaruuth also hosts two annual festivals: the Ruutia! Dance Festival for children and young people in April and the Red Pearl Women’s Clown Festival in February. Hurjaruuth has its own stage at the Cable Factory cultural centre, but its repertoire also extends occasionally to other venues, such as the Suvilahti cultural centre.
Cable Factory, Tallberginkatu 1 A / 117, Ruoholahti 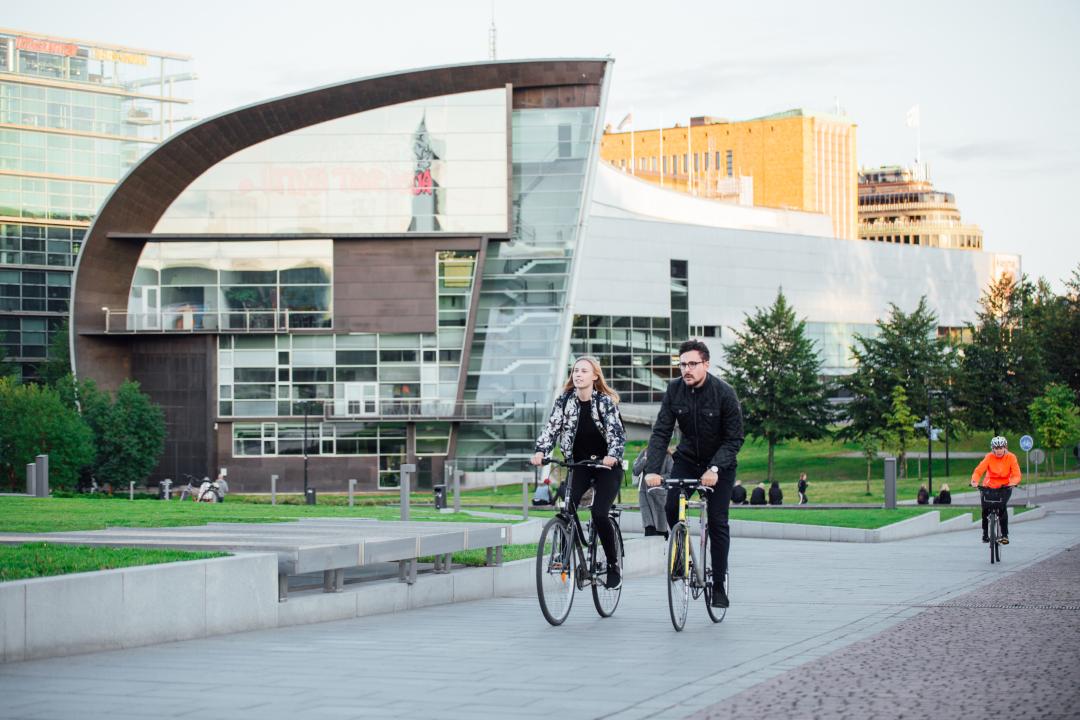 Did you know that the Museum of Contemporary Art Kiasma has its own theatre? Instead of traditional drama, however, the Kiasma Theatre presents contemporary and multidisciplinary performances. The theatre’s repertoire is more or less in dialogue with the museum’s exhibitions, which you can also visit by showing your theatre ticket on the day of the concert. In addition to presenting Finnish and international performances, the theatre’s staff also programme and produce Kiasma’s film exhibitions, performances and installations – not to mention the annual URB festival of urban art and culture.
Mannerheiminaukio 2, Kluuvi

Stoa is one of the City of Helsinki’s own cultural centres that can be found in Itäkeskus. The artistic quality is very high, and you can catch the premieres of top Finnish contemporary dance and live art productions almost on a monthly basis. Susanna Leinonen Company, Liisa Pentti +co, Kinetic Orchestra and countless other groups are regular guests at Stoa. In addition to dance and theatre productions, Stoa also offers exhibitions, concerts, a library and an excellent restaurant. Itäkeskus is easy to get to by metro.
Turunlinnantie 1, Itäkeskus

Svenska Teatern is the National Theatre for plays in Swedish. Its repertoire includes everything from big musicals to intimate contemporary dramas and children’s theatre, and it stages high-quality productions for fans of Swedish-language theatre. Svenska Teatern offers subtitles in Finnish mainly, but sometimes also in English.
Pohjoisesplanadi 2, Kaartinkaupunki

Teater Viirus is a long-standing Finnish-Swedish ensemble theatre in Jätkäsaari whose repertoire features its own topical contemporary productions, as well as guest productions. Viirus offers all of its own performances with subtitles in Finnish and English.
Välimerenkatu 14, Jätkäsaari

Theatre, circus, magic and film – with such a delightful combination, you can’t go wrong! Run by the internationally renowned WHS visual theatre and contemporary circus group, Teatteri Union has been a mainstay for local film and theatre lovers for decades. The venue once housed an adult cinema and contemporary theatre stage, and these days it’s a bit of a mix of the two and a lot more besides.
Siltavuorenranta 18, Kruununhaka

Zodiak is the New Dance Centre at Cable Factory. If you keep an eye on the repertoire throughout the season, you can get a pretty good idea of what new dance is all about and how strong Finnish dancers are in this field. In addition to performances, Zodiak also organises courses and discussion forums – its public outreach has been widely praised and awarded. In addition to its repertoire, Zodiak also organises the annual Side Step Festival at the start of the year. The Kaapelitehdas cultural centre is just a short walk from the Ruoholahti metro statio.
Cable Factory, Tallberginkatu 1 A / 117, Ruoholahti

Title
International dance and theatre stages in Helsinki
Location carousel
Simple liftup
Classical music venues in and around Helsinki
Show image on the left
Off
Show created/updated
On
Show in search dropdown
Off
Teaser text
Where in Helsinki can you see the most brilliant non-verbal performing arts? What venue is so exquisite that it’s worth visiting even at the risk that you don’t understand a word?
Select any filter and click on Apply to see results