Jonas Lundqvist
Lead text
Spring 2022 kicks off a new era of Finnish dance. The much-anticipated Dance House Helsinki has been in the making for decades and is now finally opening its doors to the public at the Helsinki Cable Factory. For its centenary celebration, the Finnish National Ballet will pay homage to a true ballet classic, while taking Finnish ballet into the next century.

The newest offerings from Finland's top dance artists can also be experienced on other stages in the city. The works dotting this historical springtime dance season speak to the senses and express a longing for contact. The experiences left lingering in the body from the time of the pandemic can be released through movement as the featured artists turn to also surprising means of reaching out to the public.

No dance exists without the world around it, or without other art forms: several new works bite into burning subjects and glow with imaginative visual realisations along with free-spirited soundscapes and musical worlds. These collisions reshape our everyday reality and infuse some light into it. 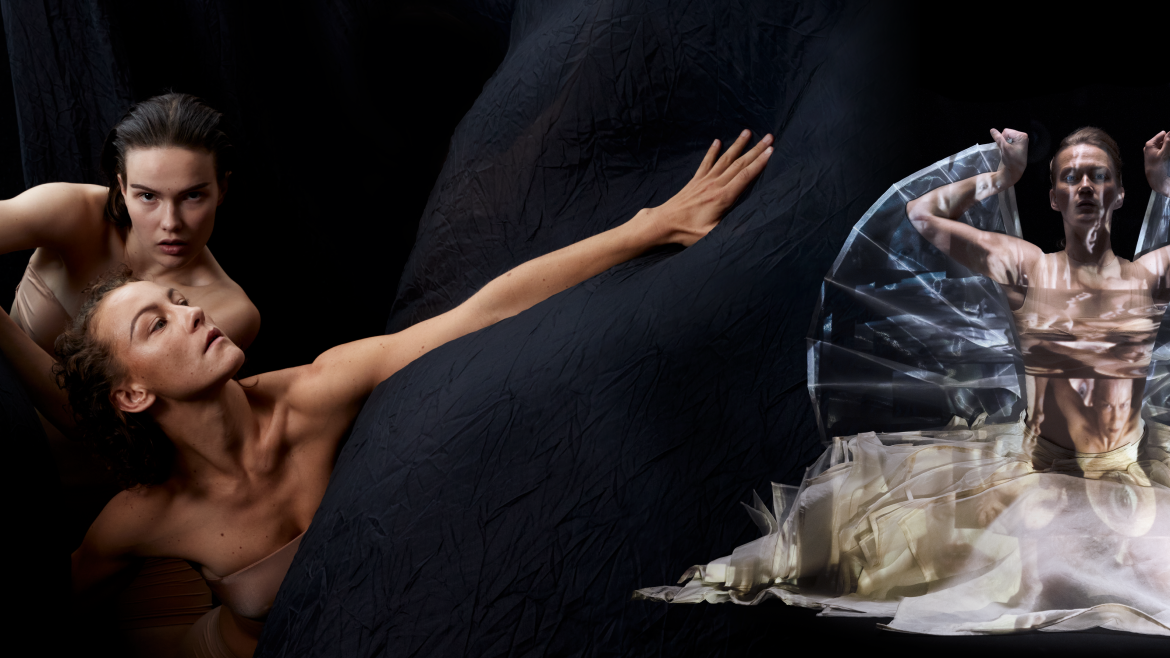 One of the most anticipated moments of the cultural spring is definitely the historical evening presenting two works by Tero Saarinen Company; one of Europe's best-known dance companies will explore new territories. The double bill evening also offers an opportunity to explore the Erkko Hall of the brand new Dance House, the largest dance stage in the Nordic countries.

Saarinen's acclaimed solo work, HUNT, moves to the music of Igor Stravinsky's Rite of Spring, and is now presented by new interpreters for the first time. The memorable HUNT, born 20 years ago, will be danced by the charismatic Auri Ahola, one of Finland's most interesting dance artists, and Atte Kilpinen, who began as a soloist at the Hamburg Ballet last year. HUNT is a demanding work in its expression: the dancer must be prepared to take over the full space and time with their presence, glueing the audience's eyes to themself. The starting points are exciting: How will the talents of a different generation interpret the classic work by Saarinen, which is so based upon his own expression and movement? And how will HUNT, a work depicting the flow of data, update its inventive lighting design and multimedia features?

That same evening, TSC will also welcome a new choreographer. The performance Hz, by the internationally sought-after choreographer Johanna Nuutinen, is the first commissioned work of the dance company by an external choreographer.

Already hailed for its uncompromising vision, Nuutinen's Hz explores soundwaves and stimulus floods inspired by the underwater world. Nuutinen's previous works have illuminated and disrupted ordinary ways of perceiving through a minimalist approach. I hope for Hz to enter my body without filter, and leave me with both a confused and cleansed feeling. The acclaimed fashion designer Mert Otsamo will make his debut in the world of performing arts as the piece's costume designer.

The two works, as well as marking the first major show of power of the new Dance House, are bound to unfold in a mix of shocking charisma, cool shades of colour, and in being moved.

Tip! If these works speak to you, the choreographies of Tero Saarinen and Johanna Nuutinen can also be witnessed in the joint Triple Bill: Made in Finland evening at the National Ballet in May. 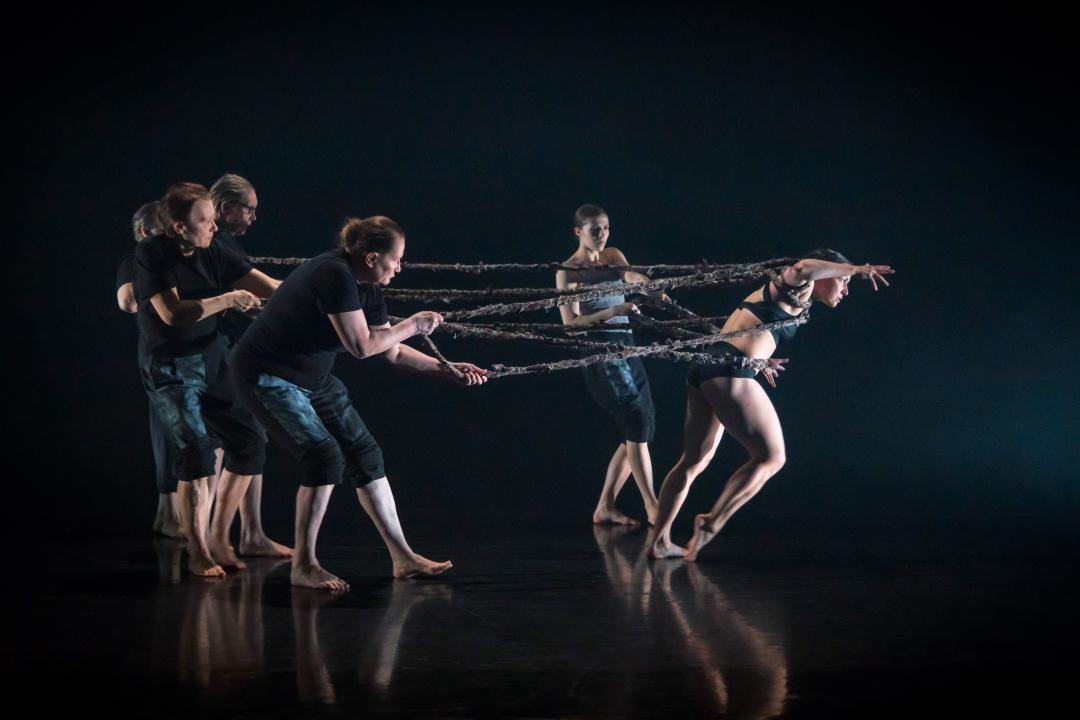 Susanna Leinonen has been pulsating at the top of the Finnish contemporary dance field for decades. In recent years, her work has dealt in particular with the exercise of power against a woman's body. The direct and at times furious, no-bullshit feminism of Body (2018), Toxic (2020), and Nasty (2021) left audiences gasping for air.

The new work, Juuret (Roots), is probably something completely different. The transition from the trilogy to a new way of narration is evidence of the extent of Leinonen's choreographic authorship. Roots is a collaboration between seniors and dancers, and the themes of aging and remembrance promise a quieter, more sensitive approach. There is, of course, room for surprises: perhaps Leinonen will also engage full force to address these themes.

Throughout her career, Susanna Leinonen has considered the outlook of life as lived in the body. In works that have also captivated international audiences, experiences tend to flow from the body through the skin to the world, and further onto other people to become part of their stories. How will Leinonen's hyperprecise and angular choreographic approach find yet another new position? How will power and fragility strike a balance? Is Susanna Leinonen going back to her own roots? 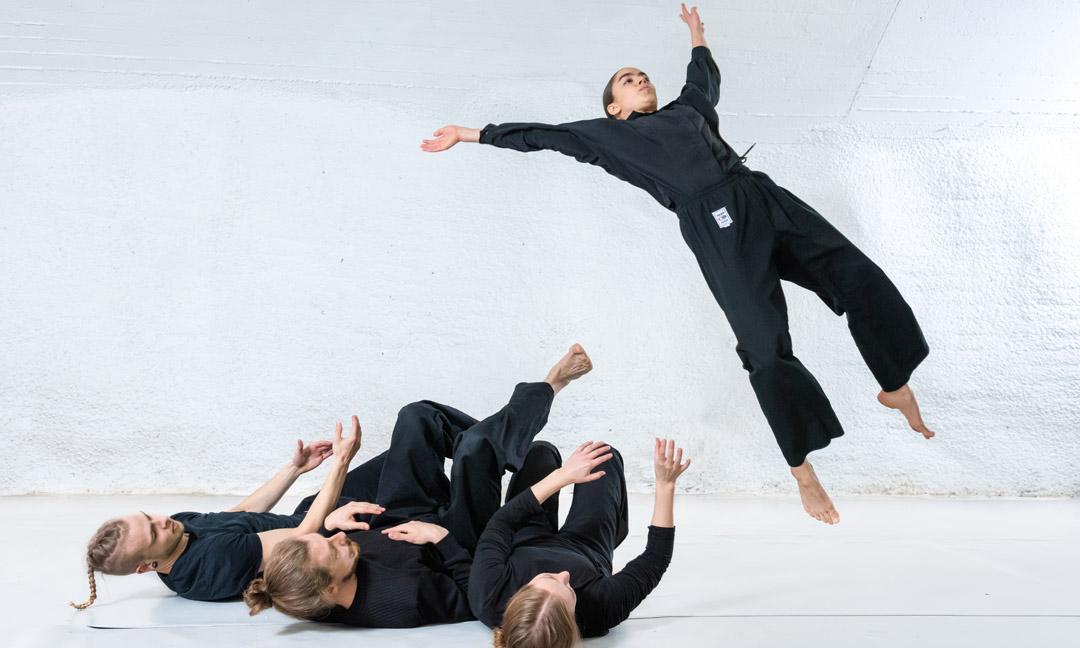 The Spring Break Festival in May will propose a marriage of effortlessly refined movement and pitch-black humour. The event, hosted by the Kinetic Orchestra dance company – spearheaded by the award-winning choreographer Jarkko Mandelin – includes Mia Jaatinen's work Red Desert and Mandelin's own work Mistakes, as its Helsinki premiere.

The programme of the long-awaited spring festival also includes O'DD by Race Horse Company, the landmark performance by the company which is out to push contemporary circus to its limits. The choreography for the performance was created in collaboration with Rauli Dahlberg and Mandelin. O’DD brings trampoline art to the present day through the virtuosity of Dahlberg, along with a dark and crooked atmosphere for all lovers of the absurd. The work was awarded the Sirkuksen lumo award in February 2022.

The works featured at Spring Break Festival emphasise accessibility and low ticket prices. The performances are created as total artworks in which the charm of unconstrained movement, incubated in the bodies of skilled and courageous creators, bows to the overall idea of the works. Both Mistakes and O’DD feature a live music accompaniment.

In the works of choreographer-director Carl Knif, the real world softens and loses some of its rigidity. Knif breaks down and builds connections into alternative representations of everyday life and situations. In the enigmatic, nightmarish Fugue in Two Colors (2020), Knif explores the connection between music and movement. A new work finds itself addressing similar topics. Sessions is a performance for six dancers, based on Franz Schubert’s String Quintet in C Major. The fine line between looking and being the object of a gaze becomes blurred.

Knif, who also works as a theatre director, has a flawless talent for dismantling performance conventions. Knif’s works reflect on the possibilities of nonverbal interaction, bubbling up from beneath their finished visual surfaces. The certain restrained coolness of his choreographies is always an interesting element. Movement that is precise to the last stroke comes across as a language that one would gladly like to adopt, but whose logic escapes immediate access. That is its attraction.

Sessions, with its title referring to care or treatment, is an absolute must-see this spring. I am already prepared to leave the audience feeling cared for, moved –– and also having my usual rug pulled from under my feet. 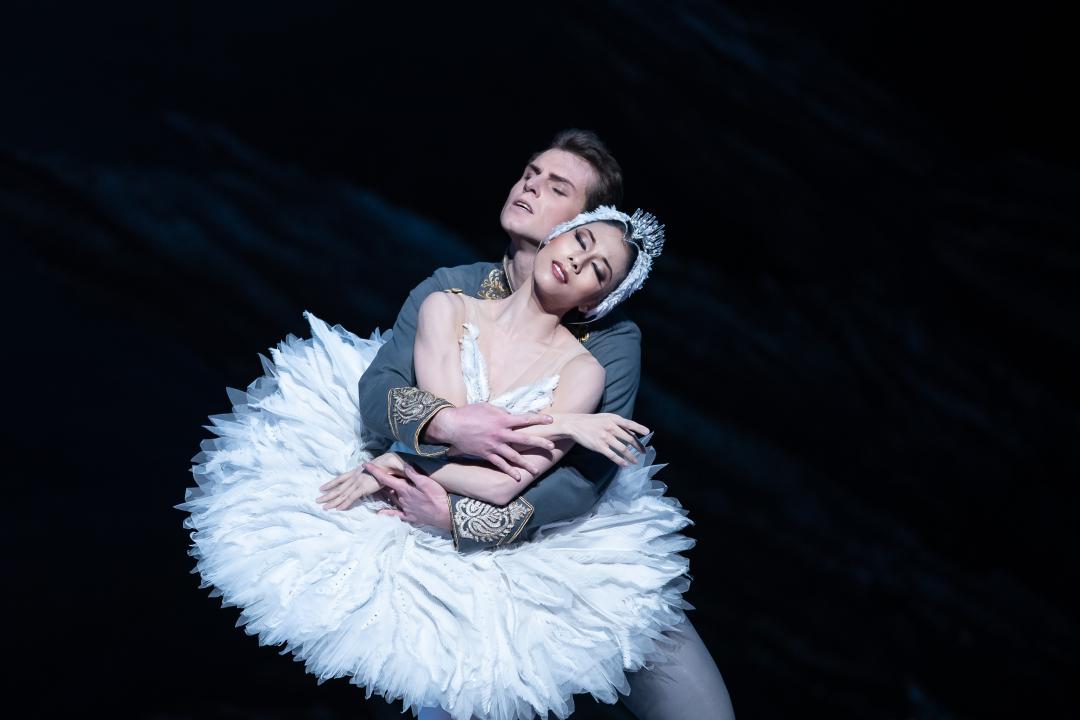 So old, and yet so new! The timeless tragedy Swan Lake was first performed in Finland in 1922, a hundred years ago. Originally born at the end of the 19th century as a collaboration of Marius Petipa, Lev Ivanov and Pyotr Tchaikovsky, the new adaptation of the classic invites us to shed any ironic attitude and simply surrender to great emotions. Of course, when watching a classical ballet spectacle, the extreme skill of the creators is bound to produce great satisfaction.

The arrangement, held in honour of the centenary of the Finnish National Ballet, is the work of the Australian director David McAllister. Its main roles feature the brightest stars of the National Ballet. The festive version of the Swan Lake takes place in a magical kingdom in the ice and snow-filled depths of the North.

Of particular interest to me is the young top dancer Violetta Keller, who will portray the most famous and difficult double role in ballet: the fragile white swan Odette and the seductive black swan Odile. Tchaikovsky’s tremendous composition work - which was first criticised for being too grandiose in the 19th century - can be heard even with the eyes closed, but the iconic work is best fitting its original purpose: defining the rhythm and mood of a beautiful swan story.

Tip: The digital premiere of Swan Lake was held live in January 2022. The well-executed recording can be viewed on the Stage24 streaming service.

6. Tsuumi Dance Theatre: We Called Her Bertha / A Couple of Humans

Dance Theater Tsuumi's works exude the joy of rhythm. Something old is broken and something new is tried, but the ideal of the new is also questioned. Tsuumi’s works are based on Finnish folk tradition, where history filters through the performers to become something new. The past is not seen as a burden, but rather as an enriching agent.

My wish for Tsuumi’s double bill evening is dreamy humour, imaginative sound design and music solutions, and once again a new approach to folk tradition. We Called Her Bertha is the long-term cocreation of Johanna Elovaara, dancer-choreographer and founding member of Tsuumi, the dancer-choreographer-singer Reetta-Kaisa Iles, and the composer-double bassist Ville Rauhala. A Couple of Humans is conceived by Tsuumi’s artistic director Riikka Puumalainen and sound designer Antti Puumalainen. The performance combines physical and visual theatre. The works will be staged in perhaps the most beautiful performance space in Helsinki, the atmospheric Aleksanterin teatteri (Alexander Theatre), built in 1879. 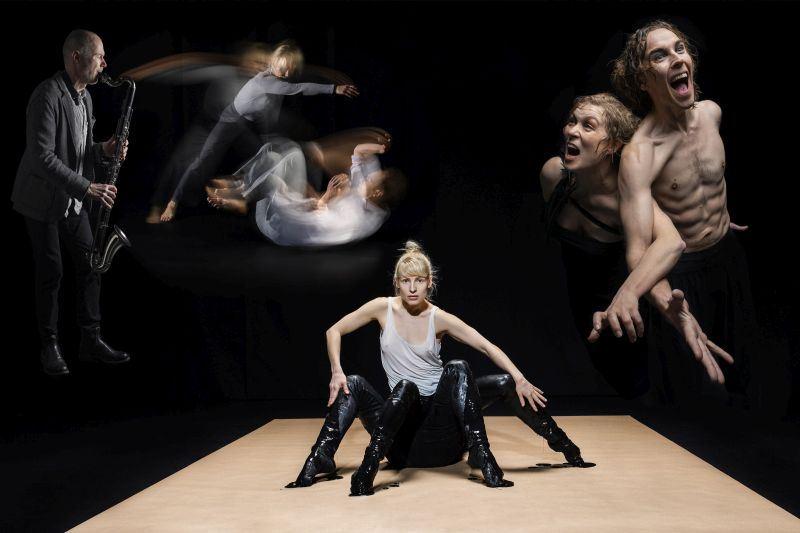 Three pieces about contact ask: How do bodies talk to each other? After a period marked with remote working, isolation, and instrumental communication, the longing for physical art contemplating corporeality is intense. The new works by Mirva Mäkinen and Sari Palmgren for Helsinki Dance Company offer kinetic comfort. In addition to the two premieres, the Studio Pasila stage will also host RISA's surreal duet GLG, which combines partner acrobatics and contemporary dance.

In Mäkinen's Luodos, dance meets the music of Tapani Rinne, a veteran of experimental music, familiar from the group Rinneradio. Choreographer Sari Palmgren, who has focused on the relationship between nature and humans in recent years, addresses mating and the animal ways of humans. In GLG, Riia Kivimäki and Saku Mäkelä explore the blurry boundaries of dance and other arts: visual arts and contemporary circus together nudge dance towards new fields.

Leena Harjunpää Co’s new solo work, Feeling Cute investigates the makings of cuteness. The work, presented in the attic space of the Korjaamo Cultural Factory, pokes at the dynamics of submission and power through the ideal of cuteness.

In recent years, Harjunpää has slowly built up her recognisable artistic expression, often reflecting on the dynamics of set ideals and liberation. Feeling Cute is the wild card of the spring art dance offering, from which I expect pink abruptness and pointing a middle finger at simplifications.

Title
Venues on a map
Location carousel
Title
Dancers and choreographers share their top Helsinki tips
Card list
Simple liftup
International dance and theatre stages in Helsinki
Show image on the left
Off
Show created/updated
On
Show in search dropdown
Off
Teaser text
Spring 2022 kicks off a new era of Finnish dance. The much-anticipated Dance House Helsinki is opening its doors to the public and the Finnish National Ballet will pay homage to a true ballet classic, while taking Finnish ballet into the next century.
Select any filter and click on Apply to see results