Katajanokka is a well-kept secret that only the residents know about. They often refuse to leave the island. Some people who are unfamiliar with the true charm of the area complain about the lack of services but the buzzing atmosphere at Kanavanranta – the waterfront stretch by the bridges – in recent years has also inspired outsiders to visit our fortress. We love to encounter other local families with children. A quick hello on the street can turn into a lengthy and therefore very un-Finnish conversation making you late to wherever you were headed.

Anders Westerholm
Entrepreneur, We Are Group

Katajanokka is a district on the eastern shore of downtown Helsinki. The Katajanokka channel separates it from the mainland, to which it is connected by four bridges. The area by the bridges is known as Kanavaranta ('Channel Shore'). In recent years this area has blossomed into a restaurant hotspot. In the summertime, the terraces on the shoreline form a picturesque summer oasis by the sea.

Until the 19th century, Katajanokka was mainly a shantytown dotted by the occasional storage building here and there. In the early part of the 19th century, several military barracks were built, followed by harbour buildings and a prison. The art nouveau stone buildings constructed in the early 20th century are well-preserved and form an architectural area that is uniquely uniform even by European comparison. These days, Katajanokka's population is around 4,000.

Oozing with discreet charm, Katajanokka also hosts a busy passenger harbour with ferries to Tallinn and Stockholm, a former prison that has been converted into a hotel, the largest Orthodox cathedral in Western Europe (Uspenski Cathedral), the Stora Enso Headquarters, which were designed by superstar architect-designer Alvar Aalto, the SkyWheel with its panoramic bird's eye view of the capital, and the year-round outdoor swimming haven Allas Sea Pool with its saunas. The creator of the beloved animation figures Moomins, Tove Jansson, spent her childhood on Katajanokka and one of the parks in the district is named after her.

Other sights include the Finnish icebreakers with their mythical, powerful names such as Kontio ('Bear'), Otso (another old word for 'Bear'), Voima ('Strength'), Urho ('Braveness'), and Sisu ('Grit'), all moored side by side for their summer nap. A recreational route follows the shoreline around Katajanokka, with views of the icebreakers and animal cries from the nearby Helsinki Zoo located on an island – when the wind is right.

Title
Things to see and do in Katajanokka
Card list 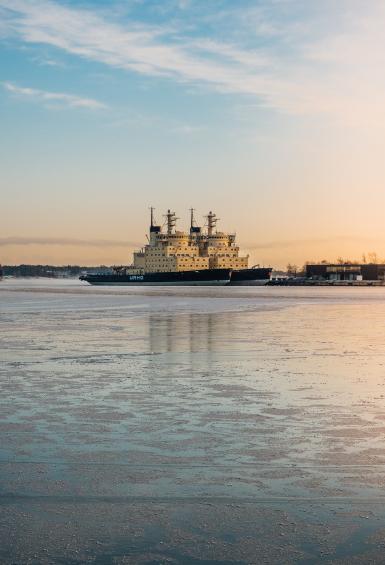 Title
Eat and drink in Katajanokka
Location carousel
Simple liftup
The best public saunas in Helsinki
Show image on the left
Off
Show created/updated
Off
Show in search dropdown
Off
Teaser text
Katajanokka is a district on the eastern shore of downtown Helsinki. The Katajanokka channel separates it from the mainland, to which it is connected by four bridges. In the summertime, the terraces on the shoreline form a picturesque summer oasis by the sea.
Select any filter and click on Apply to see results