Scandic Hotels / Annabelle Antas
Lead text
Are you planning a mini vacation in the Finnish capital? Enjoy views over the rooftops, find ten bears in the city or discover amazing places outside the centre. Here we present some of Helsinki’s surprising accommodation options and fun daytrips. 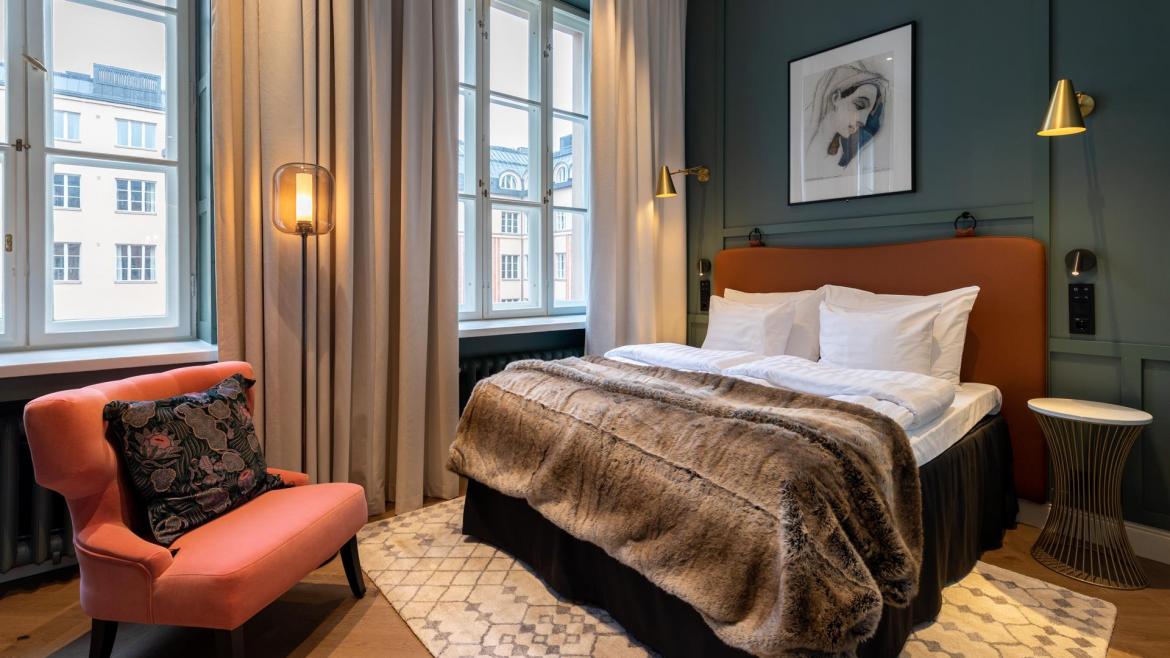 The Scandic Grand Central Helsinki has opened its doors right around the corner from Helsinki’s central railway station. The hotel offers a stylish, calm resting spot right in the midst of the bustling city. This new venture opened its doors in April 2021. Eliel Saarinen was the pioneer behind this culturally significant historic railway station. Thus the location of this modern hotel is idyllic, not only is the public transport easily accessible it is also situated right in the centre of all the cultural and fun activities taking place in Helsinki. All this makes this hotel a top spot for a staycation stopover.
Hotel Grand Central Helsinki, Vilhonkatu 13, Helsinki 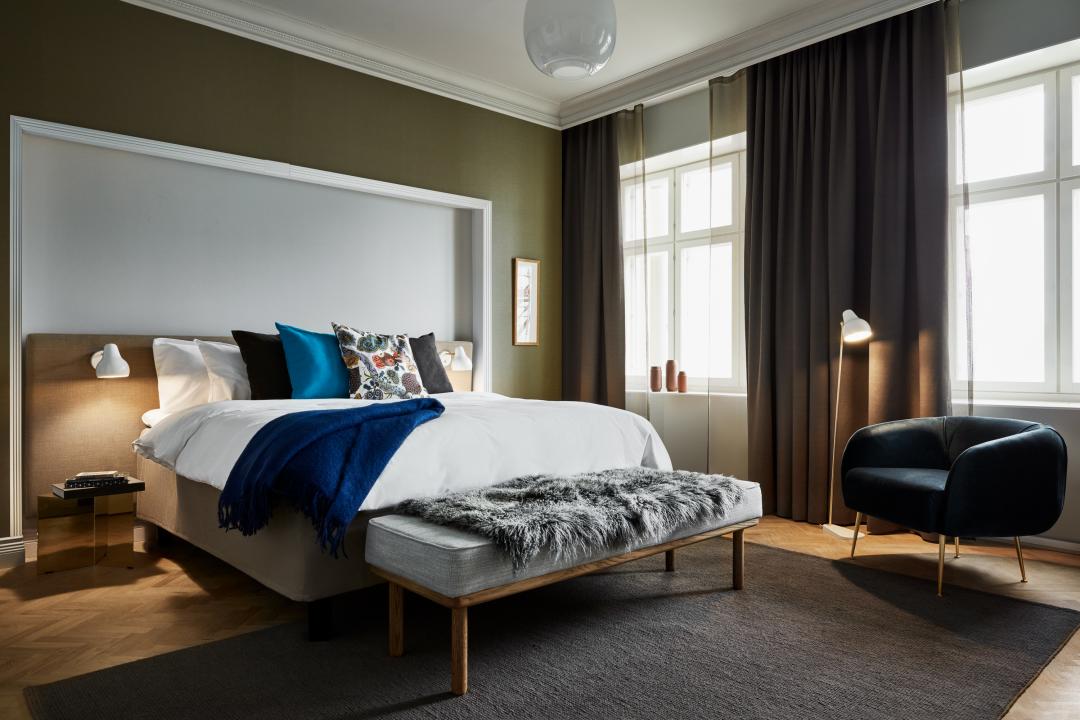 Hotel St. George is a five-star hotel with a difference, as there are no crystal chandeliers, shiny marble floors or obsequious doormen. Instead, the atmosphere is stylish yet down to earth. The rooms are decorated in subdued colours with cotton carpets, wooden furniture and vintage books. The attic rooms with their sloping ceilings are especially atmospheric. If the price of staying overnight is too much for your wallet, you can still enjoy the hotel by ordering a cake in the downstairs café or a cocktail in the glass-roofed Wintergarden bar. It feels like a secret hideaway one block from the hustle and bustle of the city centre!
Hotel St. George, Yrjönkatu 13.

An urban experience at Konepaja

If you are interested in an urban industrial experience then The Folks Hotel Konepaja, would be the best staycation place for you. Even though, this brand new hotel gives a vintage feel, as this red-brick hotel is housed in three former railway engineering workshop buildings. But if the hotel’s industrial past and history are not of interest to you, then at least the central location for cultural services and proximity to Helsinki’s best amusement park, Linnanmäki, make the hotel into an ideal staycation spot. The hotel’s Albina Restaurant serves breakfast and dinner, and the Alexis rooftop bar offers an extensive view of the city.
Aleksis Kiven katu 21-23, Helsinki

Admire the views and street art in Pasila

If you are looking for great views, the new Original Sokos Hotel Tripla in the Pasila district is a great choice for a mini holiday. The rooms on the upper floors afford amazing views over the city and all the way to the sea. You can spot familiar landmarks from Helsinki Cathedral to Finlandia Hall and even see the beacon from the Suomenlinna lighthouse. Eat out in one of the shopping centre’s numerous restaurants and then spend quality time in the room observing Helsinki from above. When you have seen as much of the landscape as you can, go downstairs to the lobby and take in the street art exhibition. More can be found in the neighbouring district of Itä-Pasila, which in recent years has become the number once place in Finland for street art!
Original Sokos Hotel Tripla, Fredikanterassi 1 B.

Enjoy the off-grid life in an eco-cottage

Located on the cliff of Vuorilahdenniemi on the southern shore of Laajasalo, the eco-cottage experience was designed by architect Pekka Littow. Off-grid living means that the cottages are not connected to electricity, water, sewer or district heating network at all. This might not be an alien concept for most Finns but for it is quite a unique experience as a city staycation. The idea is to get rid of all the ties that are now part of everyday life in an urban environment. The cottage has a kitchenette, shower room and toilet, with a loft for sleeping space and a large window on the seaside, which opens to the archipelago landscape.
Vuorilahdenniemi, Helsinki 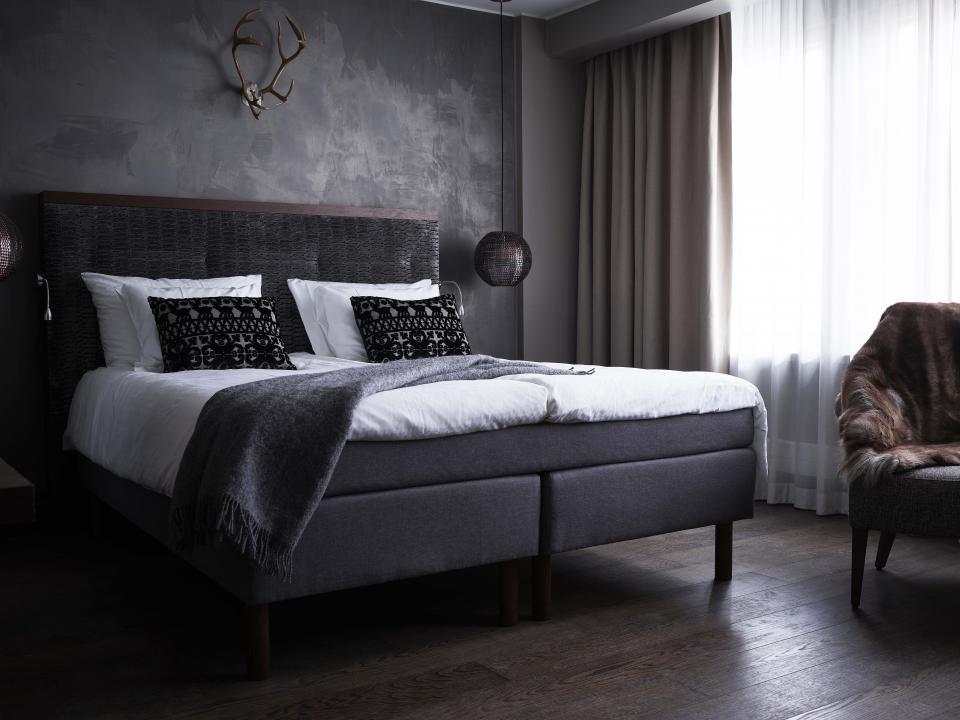 Lapland Hotels Bulevardi lets you stay in a Lappish environment in the heart of the city, surrounded by the prestigious buildings along Helsinki’s Boulevard and just a stone’s throw away from the classic Ekberg Café. More than half of the hotel rooms have their own sauna, so you can enjoy this Finnish experience in your own privacy. The Lappish aesthetics are not overwhelming, and the hotel does not feel like a kitschy tourist trap – even if there are the obligatory reindeer horns on the walls. After your sauna, head downstairs to the hotel restaurant for dinner. The Kultá Kitchen & Bar serves cuisine prepared from the finest ingredients from Lapland, including lots of reindeer!
Lapland Hotel Bulevardi, Bulevardi 28. 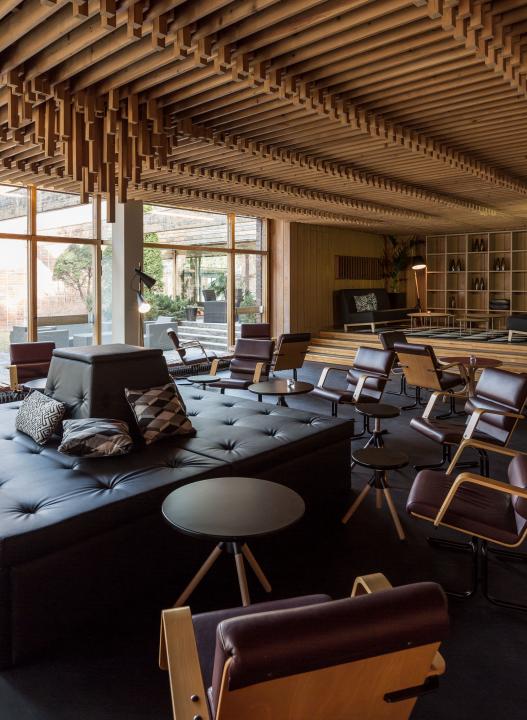 Stay at an architectural gem in East Helsinki

Less than half an hour’s walk from the Rastila metro station is one of Helsinki’s most interesting hotels. Completed in 1963, Hotel Rantapuisto is a former training centre for the Pohjoismaiden Yhdyspankki bank (PYP, later named Suomen Yhdyspankki) whose designers sought inspiration from the Louisiana Museum near Copenhagen, among others. As in the Louisiana Museum, glass-walled corridors connect the various wings of the building. Fans of design and architecture will discover great details throughout the hotel. The surrounding marine nature also offers a wide range of admiration. In October, Rantapuisto hosts the Superwood Festival by fashion brand Ivana Helsinki.
Hotel Rantapuisto, Furuborginkatu 3 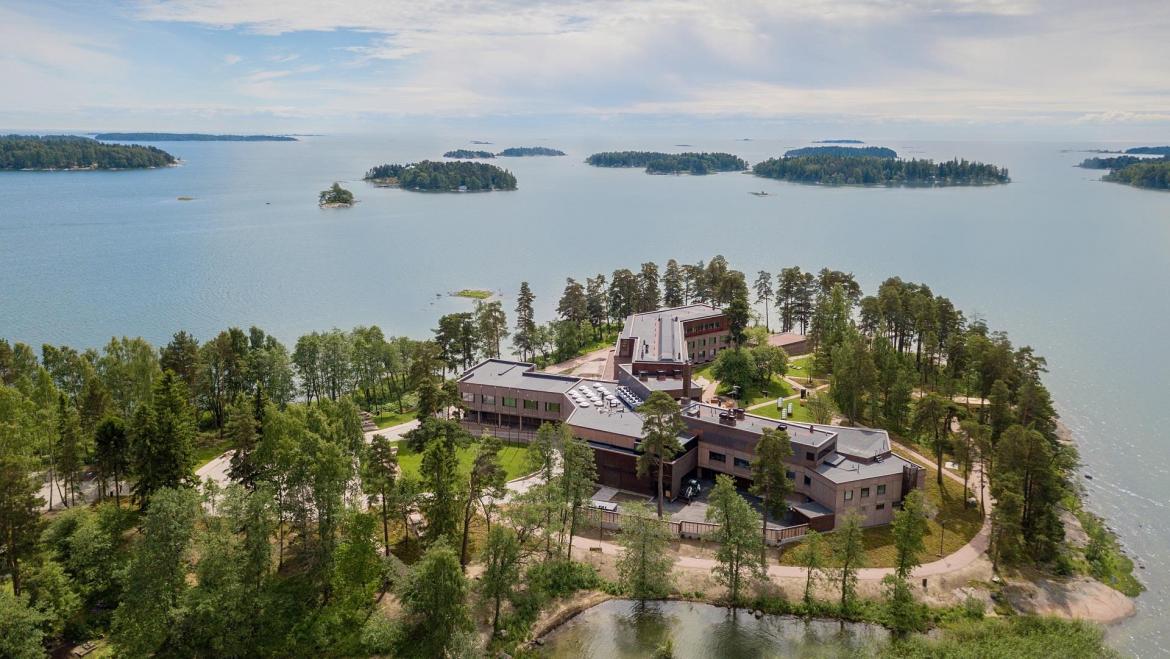 Spend the night in a cultural centre

Hotel Hanasaari is just on the Espoo side of the border with Helsinki, but it would be a sin not to include in on the list of our top staycation ideas! Originally opened in 1975, the stylishly renovated hotel is situated on a small island with a beautiful sea view. Here you feel like you are on holiday in the middle of nature, even if the Länsiväylä highway passes right by it. The same building houses the Swedish-Finnish Cultural Centre Hanaholmen, whose gallery hosts many interesting exhibitions. There is also art in the corridors and a sculpture park outside. Other attractions on Hanasaari include the Nordic restaurant Plats and a small swimming pool area that is reminiscent of the type of high-class sauna used for official entertainment in the 1970s!
Hotel Hanasaari, Hanasaarenranta 5, Espoo 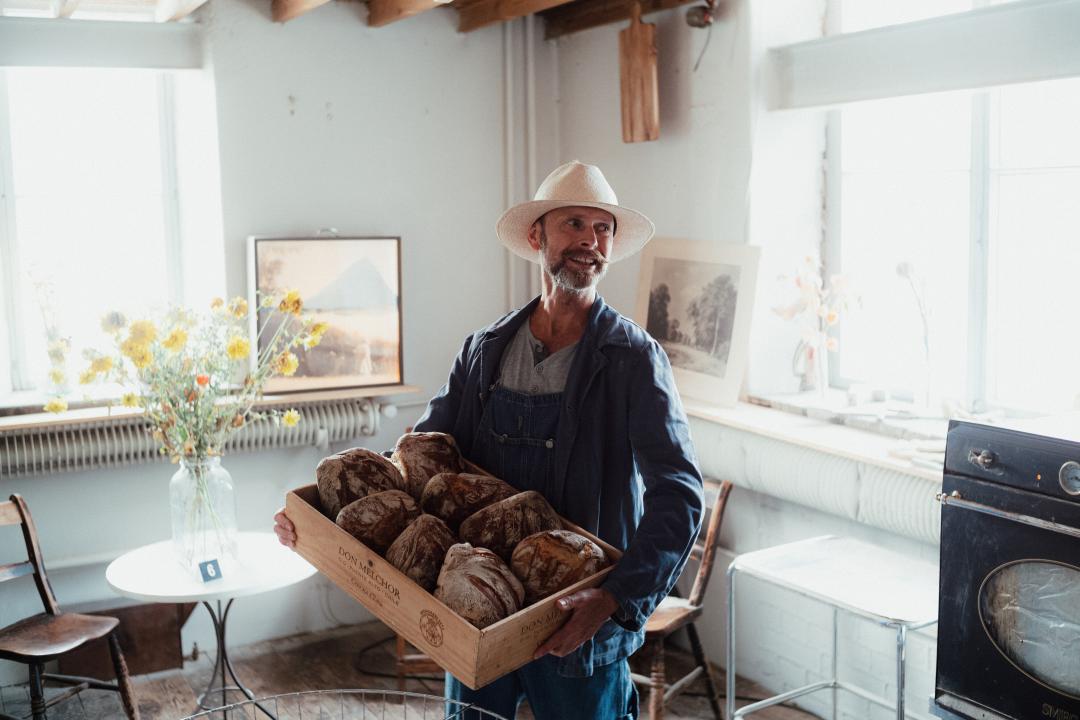 And while you're here - things to do during your staycation

Pick up a loaf from Lapinlahti

If you would like some fresh bread for your breakfast table and take a nice walk at the same time, head to the former hospital area of Lapinlahti. Its old laundry and bakery now houses the Venetsia Ambience bakery, which is open on weekends and run by Danish-born Michael Aston. His charming customer service is reason enough to visit his bakery – little wonder why customers are willing to line up for his bread. Try especially the spelt bread, not to mention his pastel de nata. On the same trip, you can enjoy a cup of coffee or a glass of kombucha at the Aura Café next door. The main hospital building, designed by Carl Ludvig Engel, is also worth seeing!
Venetsia Ambience, Lapinlahdenpolku 8

The Karhunkierros “Bear Trail” in Kuusamo may be the most famous hiking trail in Finland, but in Helsinki you can follow a somewhat different bear-themed trail and visit all the bear sculptures in the Finnish capital! It is also a great way to see different sides of the city. Start in the Kaivopuisto park, where you will find a sculpture named “The Fishing Bear” made by Bertel Nilsson in 1916. Continue from there to the corner of Abrahaminkatu 15 in Hietalahti, where a cute little teddy bear can be found waving to passersby. Then go to Lauttasaari, where a concrete bear stands in the yard at Isokaari 11 – apparently a birthday present to one of the residents. On your way back from the island, stop by the corner of Oksasenkatu and Museokatu, where the entrance is guarded by two granite bears. At the other end of the street, the main entrance to the National Museum of Finland features a fine sculpture of a bear made by Emil Wikström in 1918. Cross the city centre to Itäinen Teatterikuja, where two bear heads peer out from above the door to the Omapohja Studio at the Finnish National Theatre. From there, climb up to the Karhupuisto “Bear Park” to admire the sculpture “The Bear on the Anthill” by Jussi Mäntynen. The trail ends at the Linnanmäki Amusement Park, where you will find a sculpture named “Bears at Play” made by Mikko Hovi in 1951.

Stroll in the shade of palm trees

Soak up the European atmosphere in Eira

Do you feel a longing for continental Europe? Visit Eira instead! The Engelinaukio square is one of those places where you feel least like you are in Finland. It is surrounded by early 20th-century Art Nouveau villas and has a small park in the middle with geometrically shaped trees and shrubs. The atmosphere is like that of a French city park – only the petanque players are missing! The building housing the Norwegian Embassy is straight from the 1960s and arguably a bit too harmonious, but why nit-pick? If you get hungry and want to continue the continental theme, head to the nearby Sikke’s, a cosy and popular little bistro that serves French and Italian cuisine.

The first time you visit Mustavuori, you will be amazed: how can there be such a place in Helsinki? You are surrounded by moss-covered walls of granite and face a dark cave with water droplets dripping from the roof. It is not actually a natural formation but rather fortifications from the First World War that have been reclaimed by nature. Please exercise caution near the caves and gorges, as there are no safety rails around them. Visitors should keep in mind that they explore the terrain at their own risk. Children should not be allowed to deviate from the path by themselves. Other wonders of the district include Kallvikinniemi, where the sand dunes and pine forests are more like Denmark. The seafront boulevard in Aurinkolahti in turn is Helsinki's own Las Palmas! Try also climbing to the top of the nearby Vuosaari Landfill Hill, where the slopes are reminiscent of Italy in some places and Lapland in others.
You can get to Mustavuori by bus from Itäkeskus, Vuosaari and Mellunmäki. Buses to Kallvikinniemi leave from Vuosaari. For details, see HSL’s Journey Planner.

Title
Selection of hotels in Helsinki
See all link
Accommodation in Helsinki
Card list
Simple liftup
Best kid-friendly hotels in Helsinki
Show image on the left
Off
Show created/updated
On
Show in search dropdown
Off
Teaser text
Are you planning a mini vacation in the Finnish capital? Enjoy views over the rooftops, find ten bears in the city or discover amazing places outside the centre. Here we present some of Helsinki’s surprising accommodation options and fun daytrips.
Select any filter and click on Apply to see results