Tuukka Koski / Koski Syväri
Lead text
Helsinki is filled with restaurants that reflect the identities of their own neighbourhoods and where traditional food culture remains alive and well to this day, as evidenced by their popularity.

Local restaurants in Helsinki let you taste classic Finnish dishes that are homely, filling and very popular among Finns. Most restaurants also have their own speciality that has been a favourite on the menu for decades. For most city dwellers there are often neighbourhood restaurants that they pop by for a comforting meal. They are those local staples that offer meals that keep the taste of classic Finnish dishes alive and continue to stay popular amongst the locals for years.

While time may have stood still in these places, their clientele certainly has not. Local restaurants are part of the modern restaurant culture in Helsinki: even the younger generation has found its way to these cosy socialising establishments. 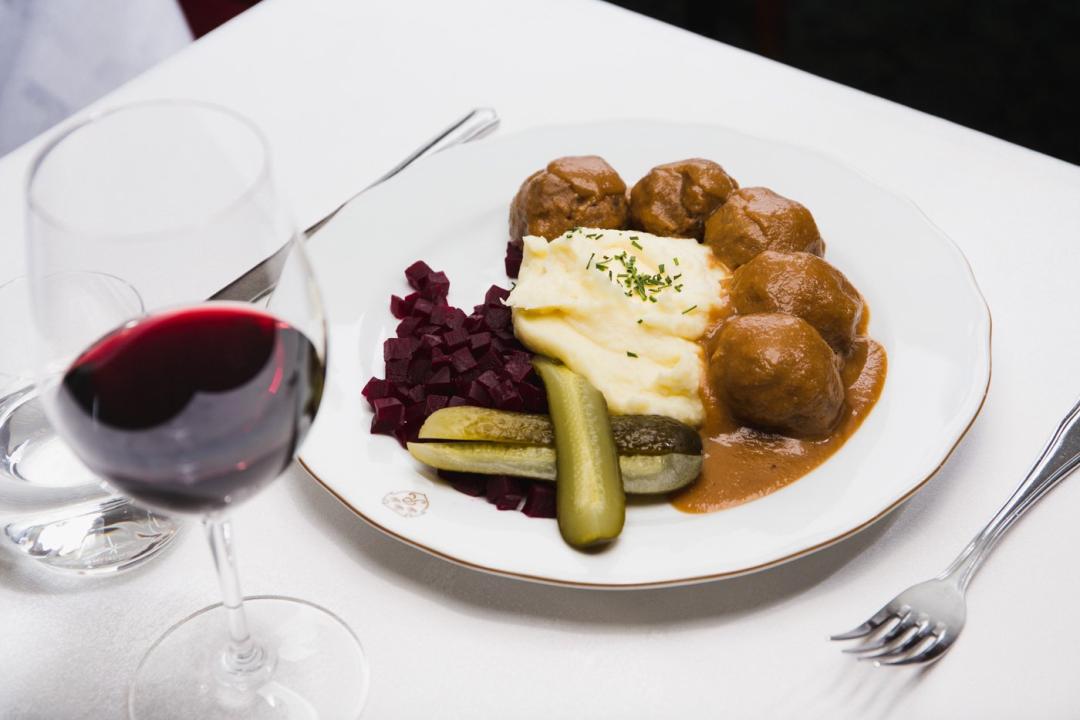 Originally called Liisanbaari, Kolme Kruunua ("Three crowns") was remodelled and renamed in 1952, when it also got a new menu. The items on the menu, such as meat balls, pan fried Baltic herrings and “pyttipannu” (Scandinavian hash), are familiar to all Finns.

Pyttipannu is traditionally made from leftovers – potatoes, onions and any meat that is in the fridge – and fried on a pan. At Kolme Kruunua, the dish is made with delicious smoked ham and topped with a fried egg.

Meatballs are often thought of as Swedish, but they are also a favourite food among Finns – especially when they are cooked to be juicy and served with brown sauce. This is how they have been served at Kolme Kruunua since the restaurant first opened in the 1950s, and they have been voted the best meatballs in Helsinki. They are served with brown sauce, lots of black pepper, mashed potatoes, pickled beetroot and pickles. According to urban legend, anchovies are used when preparing the meat! 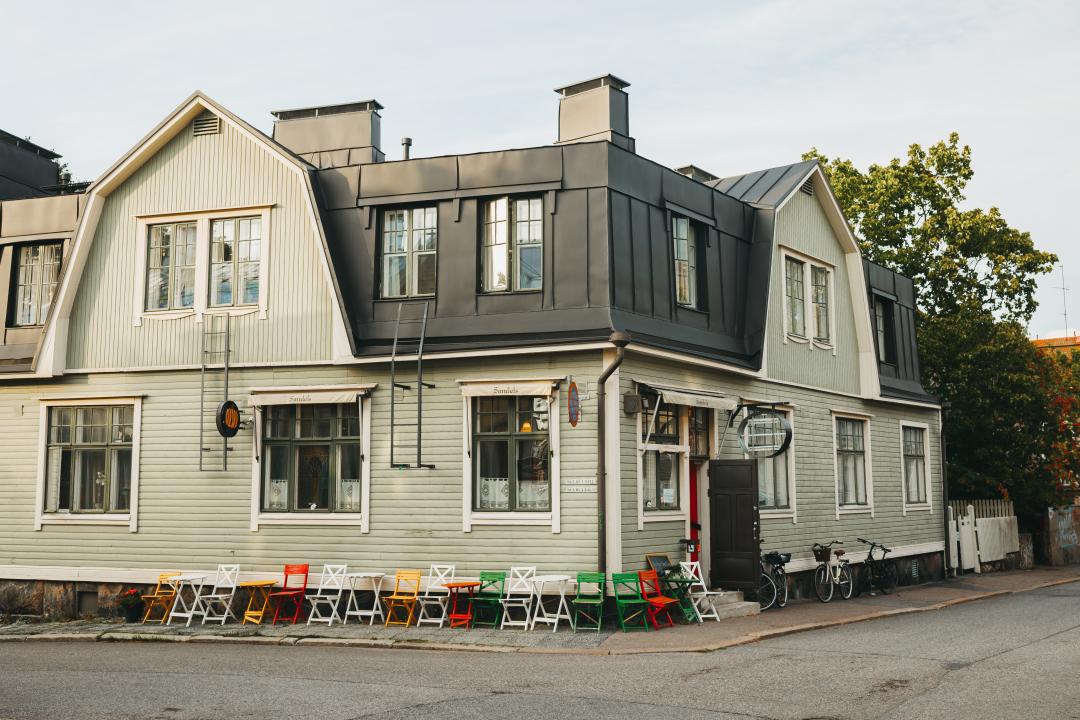 The historically working-class district of Puu-Vallila is packed with sympathetic wooden buildings that were built in the 1910s. During the boom years in 1986, the local restaurant Pikku-Vallila moved into one of them.

In 2019, four new owners took over the restaurant: Karoliina Heiskanen-Helin, Mari Strang, Jarkko Kumpulainen and Maija Kimpanpää. They were careful to keep the restaurant’s bohemian atmosphere, which is reminiscent of the Russian period in Finnish history. The tiny tables covered with lace tablecloths and plush furniture complete the Chekhovian atmosphere and honour Vallila’s history.

The menu at Pikku-Vallila is equally traditional, reflecting Finland’s position between East and West that marks it out from the other Nordic countries. Delicious pelmeni are carried from the tiny kitchen to the tiny tables, where the vicissitudes of life are pondered around glasses of AF Brew beer from St. Petersburg. The broth and spicy Eastern European-inspired and tomato-based adjika sauce for the pelmeni are the restaurant’s own recipes. The dish is served with pickles and smetana.

In addition to local artisan beers, the restaurant also serves tasty spirits, such as the award-winning “Helsinki Tyrnipontikka” sea buckthorn moonshine by the Helsinki Distilling Company. Coincidentally, moonshine was distilled in the same neighbourhood during the Prohibition!

The restaurant’s pastries are very seasonal in keeping with the Finnish tradition, sometimes featuring blueberries, other times apples. The long dark winter period does not feel so daunting when you know that you can order the restaurant’s homemade apple-based mulled wine.

During the May Day festivities, Pikku-Vallila also makes its own Finnish mead, an alcohol-free and family-friendly fermented beverage made from lemons. 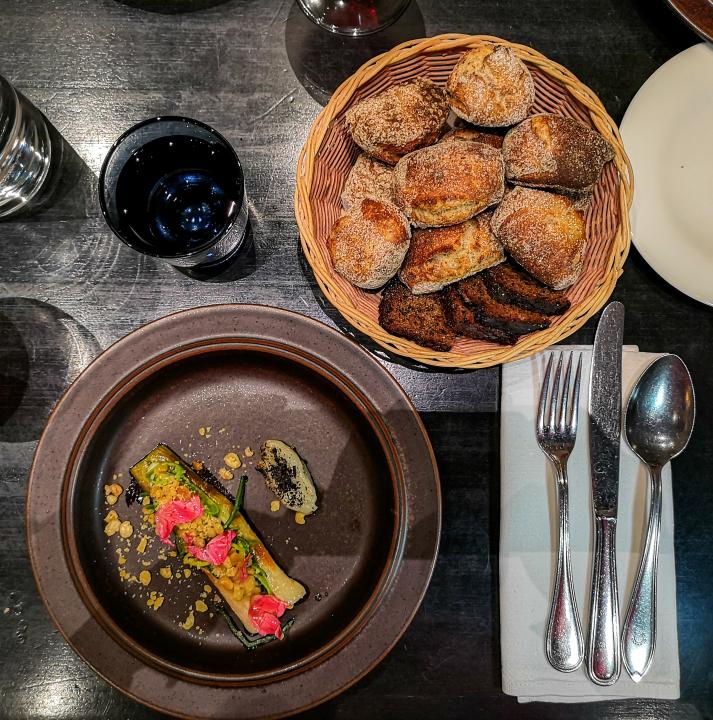 As the restaurant’s name suggests, Ateljé Finne was once the studio of Finnish sculptor Gunnar Finne up until 1952. The restaurant Ateljee opened in 1952 and was renamed in 2007, when it got new owners: musician-restaurateur Antto Melasniemen and Heikki Purhosen.

Reminders of how the premises were originally used can be seen not only in the restaurant’s names, but also in the sculptures that are on display. Gunnar Finne was said to be a modest and plain-spoken person, and the restaurant’s food is equally honest and unapologetic.

The Michelin guide describes Finne’s dishes as modern and local. The fish of the day is always worth trying and never disappoints. The fish is caught in Kustavi, either by Melasniemi himself or together with local fishermen.

Originally used as a medicine, liquorice has become a national delicacy among Finns alongside its salty sibling, “salmiakki”. Liquorice also divides Finns into two camps: some prefer the fresh and soft variety, while others prefer harder liquorice. Liquorice crème brûlée has been a favourite on the Finne menu for years and represents everything the restaurant does best: a generous portion with both Finnish and international influences. 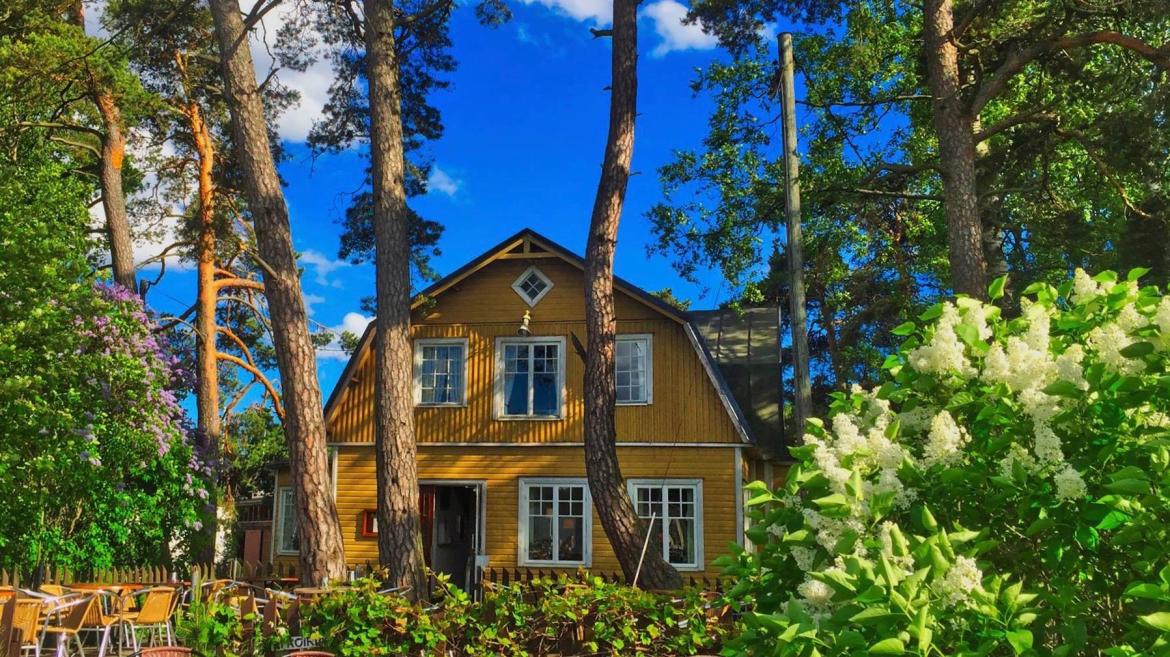 Palma de Pyy, also known as the Restaurant Pyysaari (or simply “Pyy”), is not a traditional local restaurant. Instead, it is a summer restaurant situated on an island and whose clientele share a common hobby. Pyy is the restaurant of the HTPS yacht club that is open to the public and attracts boatloads of visitors from across Finland, though mostly locals.

The restaurant was founded in 1952 to look after international sailors competing in the Summer Olympics. In its first years, the restaurant served “nakki” frankfurters, which were particularly popular at the time, and pork chops on weekends. Pekka Manninen updated the menu in the 1970s, and since then the restaurant has served “ooppera” (opera), “kappeli” (chappel) and herring sandwiches. Particularly popular is its classic shrimp sandwich, which is piled high with the crustaceans.

Sandwiches have long been part of Finnish food culture and the menus of local restaurants in particular. They are quite different from Danish “smorrebrod” open sandwiches and are traditionally much more filling: their main job has been to take away your hunger!

Pyy’s portions are also generous and mainly include either meat or fish. For dessert, try the spruce ice cream made by Suomen Jäätelö; it gets its flavour and colour from spruce needles gathered at nearby Kuusijärvi. 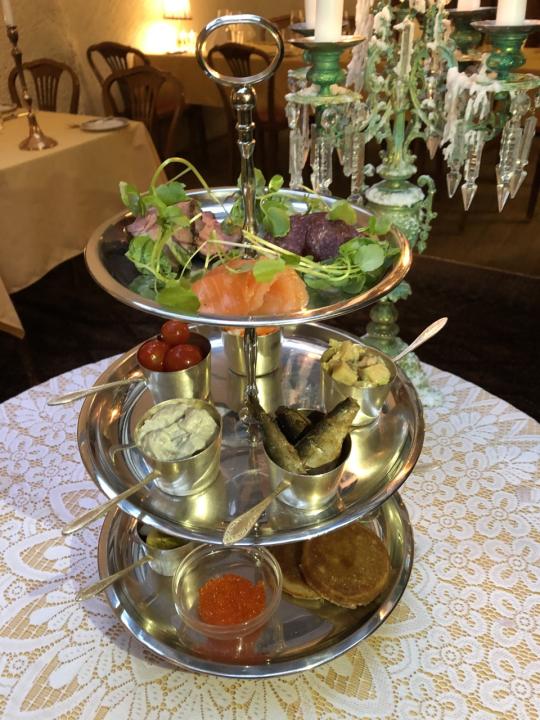 The restaurant Bellevue has served customers next to the Uspenski Cathedral in Katajanokka, next to the Market Square, for more than a hundred years. The cosy restaurant was founded in 1917 by Estonian Grigori Pavlov, who later changed his name to Reko Paulo.

Small table lamps and a crystal chandelier illuminate the restaurant’s classic portions. Bellevue also reflects the Russian era of Finnish history; the broths are especially delicious, and its blinis are served with a wide selection of roe. The strongly Russian cultural tradition also includes wild game, including bear, which is included in the “zakuska” hors d'oeuvres buffet that is served on the first Saturday of each month.

The zakuska buffet featuring wild game, mushrooms and fish delicacies is a rarity among Helsinki's restaurant offerings and is definitely worth trying. Mushrooms, berries and pickled delicacies are cornerstones of Russian and Finnish food culture that are growing in popularity around the world.

In other aspects, Bellevue’s dishes are strongly influenced by French cuisine. The menu includes herb-potato quenelle and apple frangipane tart, as well as pavlova, which is a fine example of the blending of French and Russian food cultures.

Johanna Mäkelä, Professor of Food Culture, Sara Sirkiä from Palma de Pyy and Maija Kimpanpää from Pikku-Vallila were interviewed for this article.

Title
More cozy and traditional restaurants in Helsinki
Card list
Simple liftup
Helsinki's classic restaurants
Show image on the left
Off
Show created/updated
Off
Show in search dropdown
Off
Teaser text
Helsinki is filled with restaurants that reflect the identities of their own neighbourhoods and where traditional food culture remains alive and well to this day, as evidenced by their popularity.
Select any filter and click on Apply to see results