Quality food belongs to everyone

Helsinki's wine offerings are now better than ever. Even the wines served by the glass at casual restaurants, such as Harju8, Goose, Plein and Way, are of very high quality.

“We have many restaurants in Helsinki with truly international levels of wine offerings,” says Pilvi Auvinen from the Grape Wine Bar on Uudenmaankatu.

“The selections here are often quite diverse. It must be largely due to the fact that we do not have our own wine production, and customers are very open to recommendations, unlike in many wine-producing countries, where customers often have a strong preference for wines from a particular region or producer. We have an open-minded interest in wines, no matter where in the world they may come from,” she continues.

Founded by three female entrepreneurs, the Grape Wine Bar hosts wine tastings where you can sample either sparkling wines or even specific grape varieties. As the expert responsible for wines, Auvinen herself selects wines above all, on the merits of pure taste.

One of the most interesting new ventures in Helsinki is Let Me Wine, which organises wine tastings and imports natural wines. In summer, they operate out of a classic canopy kiosk in Karhupuisto “Bear Park” in Kallio, where you can taste unique, naturally sparkling pét nat wines.

“Even though Helsinki is quite a small city, it has lots of restaurants and bars serving interesting wines,” says Toni Feri, Managing Director of Let Me Wine.

According to Feri, cities situated close to the classic wine regions sometimes have to go out of their way to find interesting wines.

Apotek, the newest restaurant by well-known local restaurateur Tio Tikka, has already earned a reputation for its international levels of service. Experience that wonderful feeling of spending an evening there, when just the right kind of wine in just the right measure is brought before you – especially the French organic wines imported by the family business founded by Tikka's mother, Asta Nurmilaukka.

The wine bar at the Michelin-starred restaurant Muru serves a selection of wines by the glass that changes daily, as the restaurant stocks over 750 wines. The wine bar is also a nice place to stop by on a whim, as there is more likely to be space there than in the restaurant itself. You can also order Muru’s legendary risotto at the wine bar. Thursdays at the Muru wine bar are dedicated to champagnes, and each Friday one of its iconic wines is uncorked, which you can order beforehand. 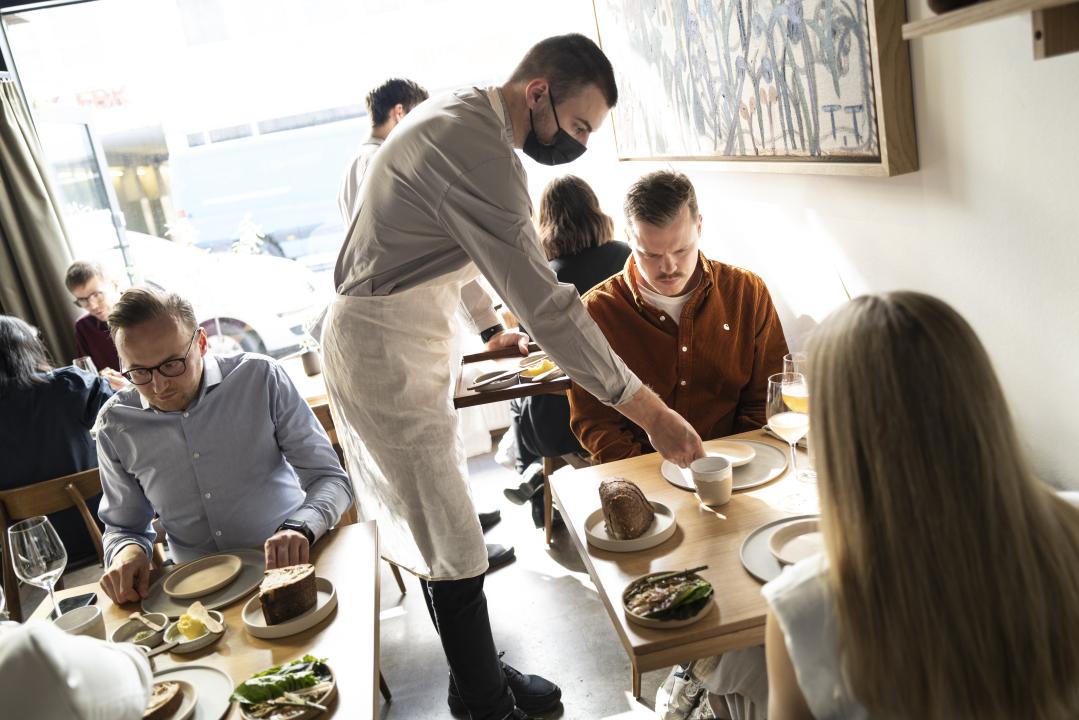 Michelin-quality cuisine for less than a hundred euros

Finland has seven restaurants that have been awarded a Michelin star, many of which are hoping for a second star. To get a star these days, restaurants no longer need to have their food served on white linen by waiters in tailcoats. In Helsinki, a Michelin-star dinner can also be enjoyed relatively inexpensively compared to the international level.

Grön, Demo and Ora all offer a tasting menu for less than one hundred euros. Grön offers both meat and vegetarian menus featuring no less than 8 dishes. At Demo, the six-course menu is revealed only at the dinner table, as it is not published in advance. Ora in turn announces on its website when its nine-course menu is being updated, so you can check in advance when there is something new for you to try.

For centuries, Finnish food was mainly based on vegetables, and meat was a festive dish. In recent years, more and more Finns have become reacquainted with vegetarian food. The boom comes courtesy of fast-paced product development, which has resulted in such treats as Nyhtökaura pulled oats, Härkis made from fava beans, Vöner vegan kebabs and Fallero, Finnish falafel.

One of the latest vegetarian products is the veggie pie from the legendary Eromanga bakery, which is famous for its meat pies. Its veggie pies were introduced following a change in ownership. Traditional Finnish meat pies are semi-circular deep-fried dough treats filled with ground beef and onions. Grill kiosks often supplement their meat pies with frankfurters, meat patties and mustard relish salad.

Restaurants that serve only vegan food include Magu on Korkeavuorenkatu, while Bun2bun is the first Finnish hamburger chain that is fully vegan. The future certainly looks green, at both home and professional kitchens. 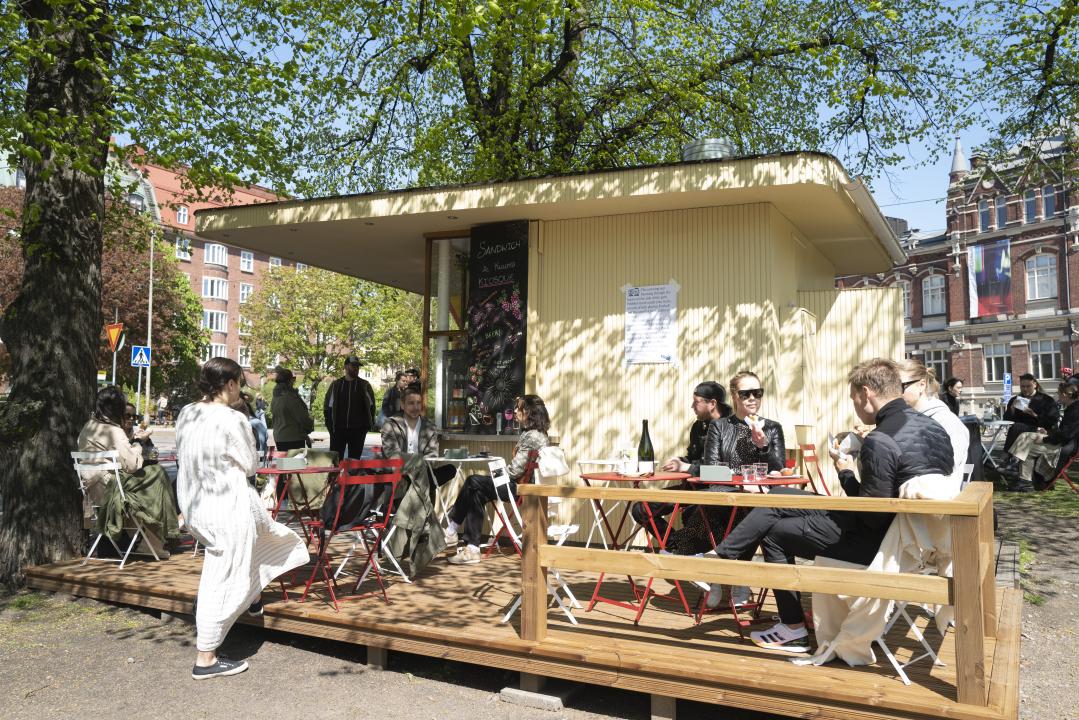 Fast food that’s easy to take with you

Finns are functionalists – also when it comes to eating. We have a long tradition of taking food with us wherever we go.

Helsinki’s iconic canopy kiosks traditionally sell snacks, but these days also restaurant-quality food. Restaurateur Laura Hansen from Kuurna thought that Helsinki still needed a proper grilled sandwich, so she set up the Sandwich de Kuurna kiosk next to the Johanneksenpuisto park. Her business partner Tom Hansen’s dream of a yakitori kiosk in turn was realised nearby the Eiranpuisto park.

These kiosks may have started of as experiments for a couple of summers, but they seem to have a future. Other vibrant canopy kiosks can be found throughout Helsinki.

There is still one food that is even more traditionally Finnish than the sandwich, and has been eaten here for centuries. Although Finland shares many traditions with other Nordic cuisines, Eastern influences – especially from Karelia and Russia – are special to Finnish food. Specific examples of this are uniquely Finnish pies, such as the rönttönen, lörtsy and kukko.

Karelian pies are especially popular among Finns, not least because they are easy to hold and inexpensive, Karelian pies have a thin folded rye crust with a filling most commonly made of rice, and they are available everywhere. They can also be filled with barley porridge and mashed potatoes, for example.

The Karelian pies from Konditoria Hopia on Pohjoinen Hesperiankatu are especially delicious, as they are cooked with lots of butter and love. Piirakkaleipomo Räty on Unioninkatu at one end of the Pitkänsilta bridge also sells vegan and gluten-free Karelian pies.

Finns in general have also taken to heart the concept of pizza Fridays. The pizza served by the restaurant Story at Gardenia in Viikki has gained a reputation for being among the best in town.

Helsinki is in fact very good at embracing ideas and developing them further. For example, Story’s pizza base is made with sourdough. This skill has never been completely forgotten in Finland, as Finns have always loved rye bread. Sourdough bread is another indication of Eastern influences in Finnish food culture. The love for sourdough baking is also spreading around the world.

Fish from traditional markets and supermarkets

Helsinki’s maritime location creates the impression that it is a city of fish – which it is!

The Helsinki Baltic Herring Market dates back to 1743 and is held each year, around the end of September and beginning of October. Fishing boats line up all along the Market Square, and the market stalls sell all varieties of herring along with delicious archipelago bread, apple juice and cured fish. A distinguished jury also convenes to vote on the best products.

Fish is also easy and relatively inexpensive to buy in Finland from grocery stores and supermarkets, including fresh fish. Fish wholesalers deliver fish to stores daily, but Thursdays are the busiest. Alongside the familiar Norwegian salmon, you will also find Finnish lake fish, such as pike perch, whitefish, pike, herring and perch fillets.

Johanna Mäkelä, Professor of Food Culture, Laura Hansen, owner of the restaurant Kuurna, Pilvi Auvinen from the Grape Wine Bar and Toni Feri, Managing Director of Let Me Wine, were interviewed for this article.