Unsplash / Markus Spiske
Lead text
Where can you find the most delicious ice creams in Helsinki, and what are the most popular flavours? Here are fifteen recommendations for the best ice creams that you can taste this summer in Helsinki.

Valerio Venti from Italy makes the best ice cream in Finland together with Tiina Karhu at Teurastamo – Jädelinö’s pistachio ice cream won the award for the best gelato (Italian artisan ice cream) at the Ice Cream and Chocolate Carnival in 2018. Jädelino is also an expert in making non-dairy vegan ice creams and fresh sorbets, all of which are available in many different flavours. In addition to the pistachio, you should try the chocolate and the fresh berry sorbet. Jädelino features over 50 flavours of which it makes at least 12-16 different flavours a day, because ice cream should always be fresh. A new addition this year is the salted caramel made without any food dyes and with a dash of Cervia salt, an ingredient that even the Pope has a soft corner for.
Työpajankatu 2, Teurastamo

The “Helsinki Ice Cream Factory” is the oldest ice cream maker in Finland, having been founded by 6 brothers from the Italian Magi family back in 1922. Back in those days, ice cream was sold from wooden carts filled with crushed ice in the city’s markets and on its streets, but these days in addition to the traditional ice cream kiosk in Kaivopuisto, ice cream cones are available from Seurasaari, Tervasaari, Hietalahti Market Square, Taivallahti near Hietsu Beach and the Glasshouse Helsinki exhibition space.Try the Maraschino cherry, liquorice, coconut and lemon flavours.

The lemon pie mascarpone ice cream by Robert’s Coffee’s gelato master Toni Sinkkonen won the award for best ice cream of the year in the milk and cream ice cream category at the Ice Cream and Chocolate Carnival in 2018, while his pistachio ice cream won the award for best vegan ice cream of the year in 2019, but my personal favourites are the carrot cake and tahini cherry. The sorbet category in 2018 was won by the blueberry-lime, which is also excellent, proving that Robert’s Coffee Gelato Factory has an impressively wide range of expertise. The actual Gelato Factory is located at City-käytävä, but Robert's Coffee's own ice cream factories also make ice cream on the Boulevard, the Jugend-sali in the city centre and on the Espoo side in Sello. In addition, ice creams are also available from Robert’s Coffee cafés, for example at Stockmann’s department store as well as at the Mall of Tripla.
Aleksanterinkatu 21 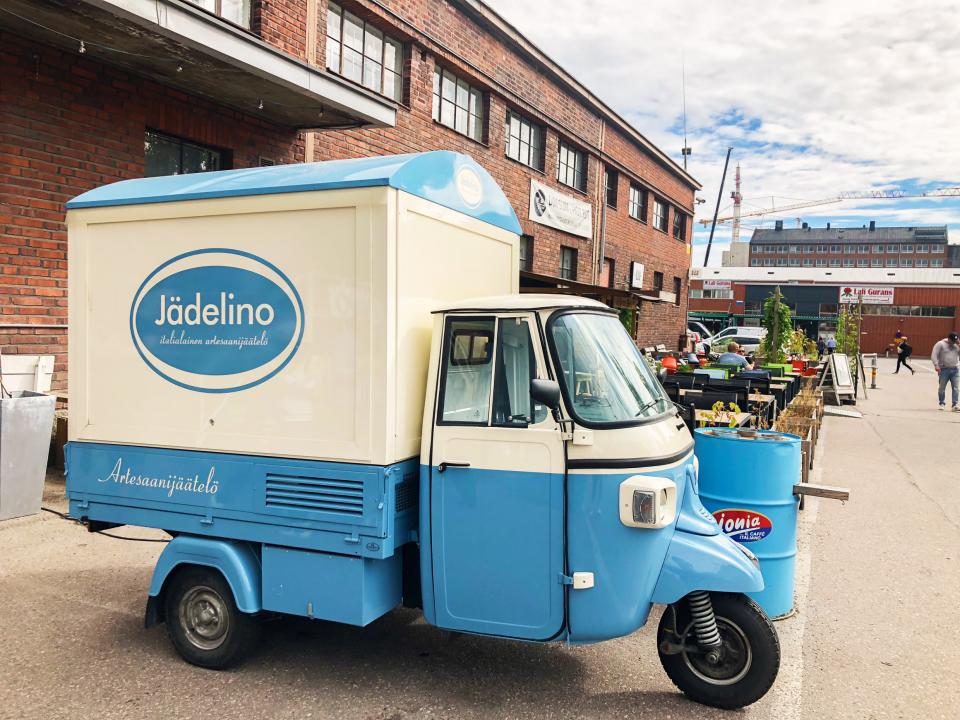 Yiping Feng and Ling Ouyang
Show in landscape format
On

“3 Friends Ice Cream” started out in Kontula in 2012 and rapidly gained massive popularity. It doesn’t have its own sales outlets, but ice creams are widely sold in various grocery stores, and in addition, the ice cream bars are available, for example, from Paulig's Corner, Kaapelitehdas Konttori and Antin Kaffeliiteri from Seurasaari. Try the Blueberry & Cardamom and the Chocolate & Caramel Nut Saunce, which won the award for best vegan ice cream at VegeAwards 2018, or the Pistachio & Pistachio and Chocolate Truffle, which were the public favourites at the Ice Cream and Chocolate Carnival in both 2018 and 2019. Among the vegan choices, the Liquorice & Raspberry is a delicious combination.

“Finland’s Ice Cream” uses only Finn Cattle milk, which has a high fat content and holds a very high amount of protein as well. The result is absolutely delicious ice cream. Its Finn Cattle Milk ice cream is exquisite in its simplicity, while its Spruce ice cream has become a modern classic. Don’t forget the excellent Rhubarb Sorbet, which won the award for best sorbet at the Ice Cream and Chocolate Carnival in 2019. You can ask for Finland’s Ice Cream at numerous grocery stores throughout Helsinki, such as K-supermarket and Food Market Herkku at Stockmann department store.

As its name suggests, the “Old Porvoo Ice Cream Factory” are made in the nearby town of Porvoo, but fortunately, there are also three pink ice cream kiosks in Töölönlahti, next to the statue of Paavo Nurmi and at Kalasatama in Helsinki nowadays. It’s a good thing too, because the ice creams created by Michelin-star restaurateur Samuli Wirgentius are truly amazing. The selection includes Basil & Ginger, for example, but my own personal favourite is the Browned Butter & Pine Nut.

Sergio Adler from Argentina has been making his artisan ice creams and sorbets in Finland for over ten years. He now makes everything in neighbouring Espoo, but you can find their kiosk in Helsinki at the eastern end of Esplanade in front of Kappeli. Try Caminito’s strawberry-raspberry ice cream with blueberry sauce, or its lactose-free chocolate and vanilla ice cream. Vegan options include mango and strawberry. 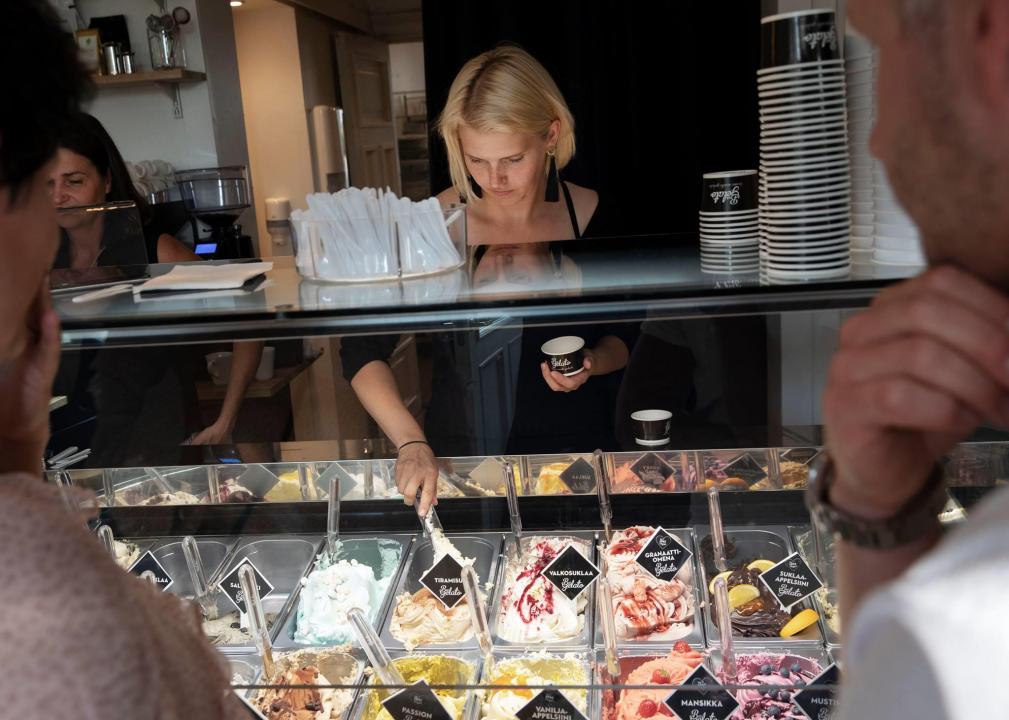 Artisan chocolate maker Chjoko also makes excellent artisan ice cream. It goes without saying that its chocolate ice creams, such as its Sea Salt-Milk Chocolate, are its specialities, but my own favorite of the flavors is surprisingly cherry basil. You should also try the lime-chili-basil ice cream called Frozen Asia. Chjoko’s own café and shop can be found on Liisankatu in Kruunuhaka, and for example, you can get Chjoko ice creams from the Sininen Huvila café at Linnunlaulu, Skiffer restaurants and the Ice Cream Café Paja from Vallisaari.
Liisankatu 9

La Gelateria has its main sales outlet inside the Old Market Hall, but you can also find its ice creams at the container kiosk in Haukilahti. Its classics include Bronte Pistachio, Calabria Strong Salmiakki and Peruvian single origin San Martin chocolate. Its açaí and cajá sorbets made from Brazilian fruits are even more exotic alternatives that you won’t find at any other ice cream kiosks in Helsinki. And better yet, you can bring home its ice creams in 550ml and 1100ml containers.

The artisan chocolates made by Bus Gelato in Lahti have also found a home in Helsinki's Hietalahti market hall's Restaurant Piilo, which offers 18 different flavors from the classics to  Cheesecake-Cherry and Oven Apple. A good selection is also available at Laivurinkatu Lounge 14, Linko Pizzabar, Cafe Ursula and Pizzeria Luca in Lauttasaari. Bus Gelato’s wide selection of vegan ice creams from Limoncello to Dark Chocolate Sorbet, which have attracted a lot of praise. Its vegan pistachio won the award for best gelato at the Ice Cream and Chocolate Carnival in 2019. Ice creams can also be bought at home in half-liter and liter packs.
Laivurinkatu 37

The new kid on the ice cream block offers a refreshingly different kind of ice cream: Thai-style vegan artisan ice cream made in rolls in front of the customer's eyes. The flavours worth trying at the very least include blueberry-lemon, lingonberry-cookie-caramel and apple pie-croquant and the winner of the 3rd prize in the 2022 Best Ice Cream Race at the Ice Cream and Chocolate Carnival, the pecan-coffee-caramel. The Rolling Ice Bar’s ice cream cart can be found in Redi’s courtyard area.
Hermannin rantatie 5

One of the smallest ice cream makers in Helsinki, Edelmann Gelato is a one-man show in Pakila. His delicious artisan sorbets and ice creams made from organic whole milk and cream are available locally as home deliveries, as well as from the Kahvila Helmi café and Annan Kartano restaurant. Popular flavours include brownie, caramel and biscotti, while my own personal favourite has to the organic vanilla!

The most authentic bistro in town has begun making its own gelato, bringing a unique addition to the ice cream offerings in Kallio. The ice cream is made from whole milk and cream daily, with flavours varying by season and the personal inspiration of the ice cream maker. In addition to the bourbon vanilla, you should try the rhubarb and rose ice creams in particular. Gastro Café’s gelato is currently available only from the café itself on Fleminginkatu, but a tricycle vending cart that would sell its ice creams in the nearby Karhupuisto park is apparently being planned!
Fleminginkatu 7

The pistachio ice cream made by newcomer Gelato Laurentius was voted best at the 2022 Ice Cream and Chocolate Carnival, so this is without doubt a premium product. Gelato Laurentius ice cream is currently available only from the Kahvitupa Laurentius café and ice cream moped outside the Church of St. Lawrence on the border of Helsinki and Vantaa, but the charming milieu is in itself worth the effort of travelling all the way out there!
Kirkkotie 47

Title
Ice-cream stalls, selling points and good places to enjoy the flavours
Location carousel
Simple liftup
Top reasons to visit Helsinki in summer
Show image on the left
Off
Show created/updated
On
Show in search dropdown
Off
Teaser text
Where can you find the most delicious ice creams in Helsinki, and what are the most popular flavours? Here are fifteen recommendations for the best ice creams that you can taste this summer in Helsinki.
Select any filter and click on Apply to see results