The tour takes a spin through Helsinki's most legendary bars, watering holes equipped with jukeboxes and traditional restaurants clad with white tablecloths where fried Baltic herring, filter coffee, draft beer and sweat still linger in the air. These pubs have served as the backdrop to the adventures of the Franks in Calamari Union, the garbage truck driver Nikander, and many other characters from the films of Finnish director extraordinaire Aki Kaurismäki.

Aki Kaurismäki (born in Orimattila in 1957) moved to Helsinki in the late 1970s and first made a living as a dishwasher, shipyard worker and mailman. He became familiar with the life of Helsinki's working class on the streets and in no-frills eateries and bars which he would later translate into cinematic scenes.

Kallio's oldest and most authentic pub is located at the spot where moonshine was sold in the prohibition era. When Sirdie was opened in 1966, it was still surrounded by wooden houses. Nowadays the 60s-style jukebox with Elvis, Beatles and sentimental Finnish classics draws a colourful crowd of greasy-haired rockers, urban vagabonds, ukulele bands and locals from the now-gentrified Kallio district. Sirdie is part of Finnish pop history: it was featured in the film Calamari Union (1985) by Aki Kaurismäki, on the album cover of Helsinki rock legend Tuomari Nurmio and in the title of a Damn Seagulls record.

Order a coffee with a sweet pastry or a sandwich and find a seat by the window to trace how the Franks in Aki Kaurismäki's Calamari Union (1985) were planning their trip to the posh neighbourhood of Eira in southern Helsinki.

There is probably no band at the start of their career who wouldn't dream of playing Tavastia one day. Or any established band that hasn’t played here. The country's most famous live music venue also served as the filming location for Aki Kaurismäki's film Calamari Union (1985). The two Franks played by musicians Mato Valtonen and Sakke Järvenpää drive a scooter through the doors of Tavastia, past the queue and straight to the bar with Chuck Berry’s Maybelline playing in the background. They proceed to place their order with a straight face: “Two ice waters.”

This restaurant, opened in 1937, is one of the few classics that held on to their original functionalist style with white tablecloths and meaty fare. In the 1980s, Messenius became the regular hangout of brothers Aki and Mika Kaurismäki as their office was located across the street. Matti Pellonpää, a regular face in Aki’s movies, would wash himself in the restaurant’s sanitary facilities when living at the office. The functionalist paintings on the walls have been created by Aki’s wife Paula Oinonen. The restaurant is seen briefly in Calamari Union (1985) when two Franks (Sakke Järvenpää and Mato Valtonen) sit by a table with a white cloth wondering how to get a ride to the neighbourhood of Eira. In the end they manage to borrow a hearse driven by a young Aki Kaurismäki in a cameo role. 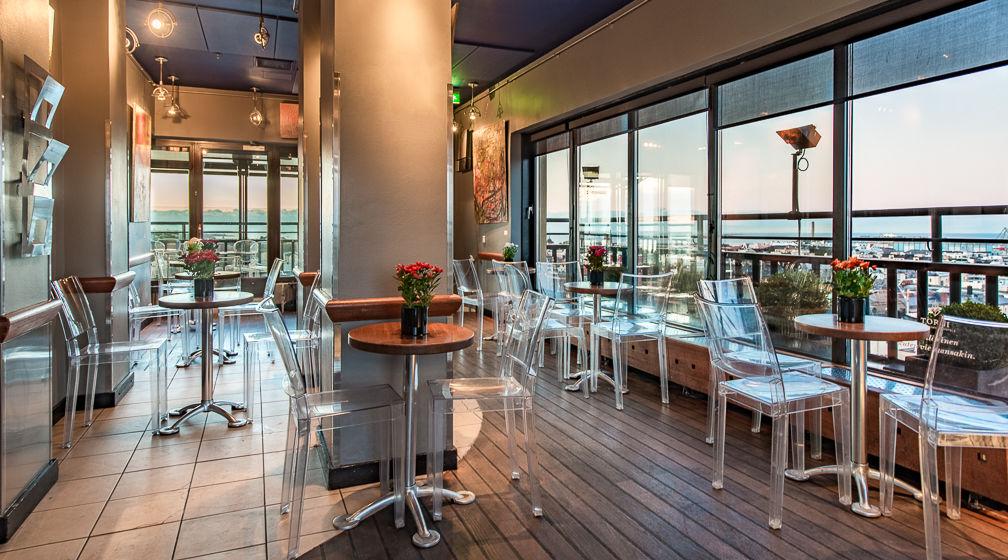 Raflaamo.fi
Show in landscape format
Off

Hotel Torni was Helsinki's tallest building upon its opening in 1931. It was meant to kick off a skyscraper boom but the city’s bureaucracy had different ideas. The hotel bar's crowd of regulars included the virtuoso composer Jean Sibelius and master author Mika Waltari, as well as the cultural clique of the 1950s-60s, nicknamed the Torni Gang, which included for instance the local King of Tango, Olavi Virta. The Ateljee Bar looms at 70 metres above ground and is the best place to take impressive photos of the downtown area from above. In Aki Kaurismäki’s Shadows in Paradise (1986), Kati Outinen’s character meets a friend at the bar and defends garbage man Nikander’s charm.

The former employee haunt of the shipbuilder giant Wärtsilä was renamed Dockyard and refurbished to meet modern standards. Don't be fooled by the slick decor as the corner bar ambiance still lives on here. You may well bump into Aki Kaurismäki himself on the summertime terrace to indulge in the mood of his former shipyard days. In his film Shadows in Paradise (1986), Esko Nikkari’s character is having lunch at this bar with his fellow garbage man Nikander (Matti Pellonpää) when he presents the idea of starting his own waste management company. He explains that he doesn’t want to die behind the wheel of a garbage truck.

The restaurateur IK. T. Itkonen founded Kannas in 1939. The restaurant was named after the area of Kannas in Karelia, the founder's home region. The restaurant became popular amongst harbour workers and the ladies that spent time in ports. Kannas experienced a renaissance in the 1980s when Helsinki's rockers started to frequent the restaurant due to its location near the legendary gig and rehearsal venue Lepakkoluola ('Bat Cave'). Kannas is one of the city's oldest homestyle restaurants and also attracts patrons for an uncomplicated pint in the evening. In Aki Kaurismäki’s film The Match Factory Girl (1990), slimy Aarne (Vesa Vierikko) cruelly dumps Iiris (Kati Outinen) at Kannas. No wonder that Iiris ended up poisoning her cold-hearted lover. 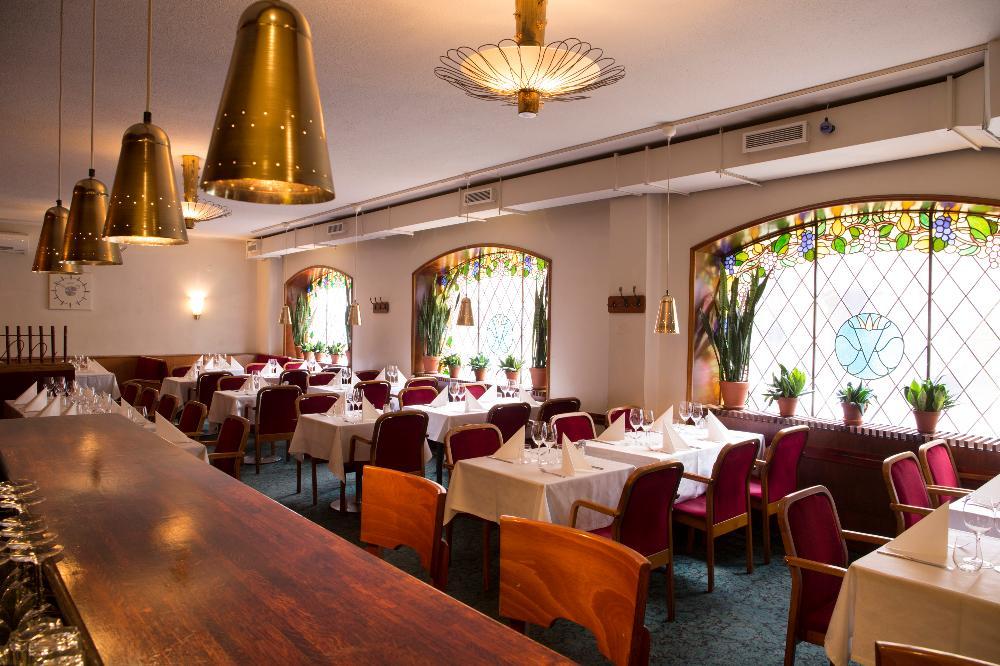 Kolme kruunua (The Three Crowns), opened during Helsinki’s Olympic year 1952, is still many people's go-to place for the best meatballs, Baltic herring and pyttipannu (the Nordic version of hash). The unique decor – stained glass, panels with intricate details and decorative mirrors – is a combination of the work of many artists. The clientele's age distribution ranges wide, from 20-somethings to 80-somethings. In Kaurismäki’s Drifting Clouds (1996), tram driver Lauri (Kari Väänänen) sits at a table at Kolme Kruunua with his wife (Kati Outinen) and tells her that he has been fired.

The location of Seaside makes it easy to imagine what it would be like to live in Helsinki. Have a cup of coffee at the Hietalahti Market Square, a traditional Finnish lunch in Kannas or in the Container Restaurant Morton, and a glass of wine at Bas Bas. Bistro Gimis is featured in Lights in the Dusk (2006). In the scene, nightwatch Koistinen finds his affection sitting at the table of a gangster.

Faro, situated by the Ruoholahti canal, is a nice place even to just enjoy the view. In Kaurismäki’s Lights in the Dusk (2006), lonely and ostracised Koistinen comes here and drinks a shot of vodka in front of the restroom door after being rejected by a femme fatale at the bar and is soon singled out by the local mafia.

Hima & Sali is a café and lunch restaurant at the Cable Factory which bakes their own organic bread and cakes. The clientele includes people who visit the fairs and exhibitions held here, and musicians who have momentarily crawled out of their rehearsal spaces. The gorgeous view of the sea, affordable lunch and a charming industrial setting attract a steady clientele even without the fairs and other big happenings held at the Cable Factory. In Kaurismäki’s Lights in the Dusk (2006), Koistinen meets Mirja (Maria Järvenhelmi) at this café when she joins the lonely-looking man. Their mandatory small talk, of course, begins with remarks about the weather after which Koistinen says: “Now what? Should we get married?” Mirja replies: “We could, but we need to get acquainted first.”

Finland's smallest bar with a liquor licence is an authentic haven in the middle of the busiest shopping area in Helsinki. It gets a bit crowded, especially when there's live music. Spontaneous troubadours can borrow a guitar behind the counter. In Aki Kaurismäki's The Other Side of Hope (2017), this is where the Syrian Khaled goes for a pint and listens to blues.

The gorgeous casino building was completed in 1913 for the use of Russian officers. During the Finnish Civil War, the building was first taken over by the Red Guards, then by the German Army and finally in 1919 by Finnish officers. Royal Ravintolat started to run the current restaurant in 1999. The casino appears in Aki Kaurismäki's film Drifting Clouds (1996). In the scene, the character played by Kati Outinen asks for a job in the restaurant only to be turned down by Esko Nikkari.

SameSame - But different is located where Aki Kaurismäki staged the restaurant seen in his film Drifting Clouds (1996). Kati Outinen plays the character of an unemployed maitre d' who creates a job for herself by opening a restaurant which becomes popular amongst garbage collectors and other workers. One of the patrons at Työ is played by the late film critic Peter von Bagh, who orders a whole bottle of the spirit Koskenkorva for himself in the movie.