A treasure map of fashion in Helsinki

Sara Forsius
Lead text
Some years ago it was quite obvious that any upcoming fashion talent would leave Finland soon after graduation. In 2022, it’s a whole 'nother ball game. Now you can navigate Helsinki with a treasure map of fashion diamonds in the making.

All kinds of interesting stuff is cooking up in the Helsinki fashion scene. After working a couple of years as a clothing designer outside Finland, I returned to Helsinki, where people were learning to cope with the pandemic, in the spring of 2020. It had felt natural to leave Finland as my city had limited opportunities for designers with big dreams and visions. Now it’s different. The city is sizzling with young designers dreaming of brands and aiming at international markets. I felt that in addition to design, architecture and other arts, fashion was finally forming a part of the creative image of the Finnish capital. And yes: I started my own brand in the summer of 2021 in Helsinki, my birth city. Our studio is located in an old carpentry workshop in Viikinmäki, amongst the car repair shops and tinsmiths.

Of course, the signs of change have been in the air for a long time. In 2019, the esteemed Business of Fashion named the Aalto University School of Arts and Design bachelor’s degree programme the best in the world, and the university’s reputation as a top fashion school is undeniable, at least for the time being. Aalto students shine in international fashion contests, too. For example, in the world’s most appreciated design competition for students, the Hyères Fashion Festival, nearly half of the ten finalists in 2022 are Finns: Jenny Hytönen, Juha Vehmaanperä and Sini Saavala from Aalto University and Priss Niinikoski from the Royal Academy of Fine Arts in Antwerpen.

But where in the city centre can we find the most interesting fashion brands and designers right now? 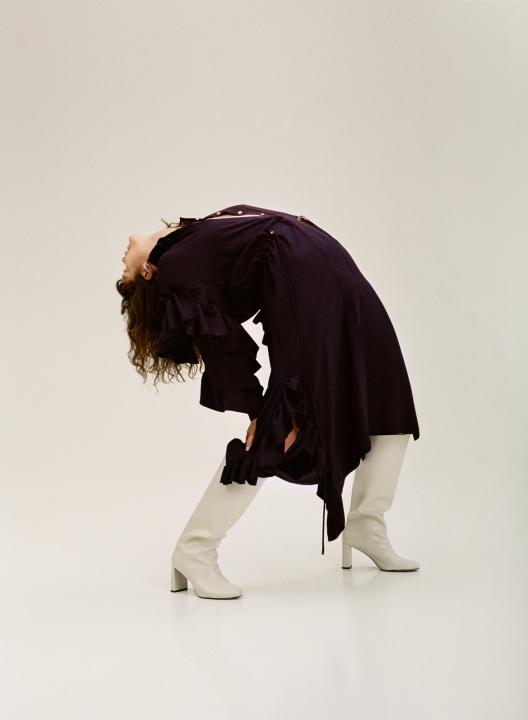 The Swedish-speaking village of Töölö already existed before the City of Helsinki was founded. Hedvig, founded by Sofia Järnefelt and Taru Lahti in 2021, finds inspiration in history, present and future. The idea of the brand was born from an art project inspired by Järnefelt’s two grandmothers. Hedvig’s idiom exhumes a mystical, seductive connection to the past while pursuing refreshing curiosity towards the future. Järnefelt and Laine wanted to establish Hedvig and be based in Helsinki because it is important to them to build a more international fashion field in Finland. 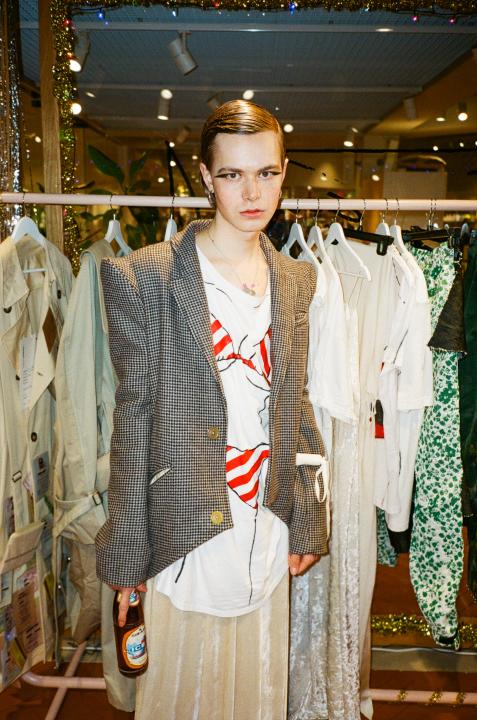 Fashion Community Helsinki is also located in Töölö, by the Hesperia park that divides the southern Etu-Töölö and the northern Taka-Töölö districts. It is a collective of young fashion designers whose vision is to build the awareness of the fashion industry and especially the young designers in Finland. This is done, for example, by organizing sales events and creating a network for fashion professionals and those interested in the industry. A longer-term goal is to serve as a channel to approach new designers. The members of the collective support each other as a community, and the idea to form a collective was based on the shortcomings and wishes of their very own community. The next practical step for Fashion Community Helsinki is to create a showroom where designer clothes can be leased and presented. 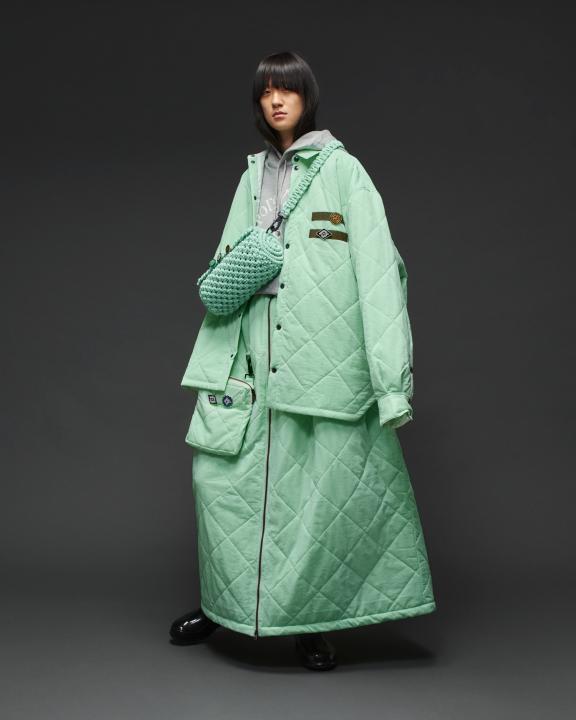 From Töölö we head east to maritime Kruununhaka, where we find the studio of the award-winning designer Rolf Ekroth. His brand’s latest collection was launched digitally on video at Pitti Uomo, the world’s leading menswear event in Italy. Although Ekroth’s collections repeatedly end up on the pages of international fashion magazines, such as Vogue, the designer says he’s tightly based in Helsinki. He says, jokingly, that he’s not ready to move abroad yet. 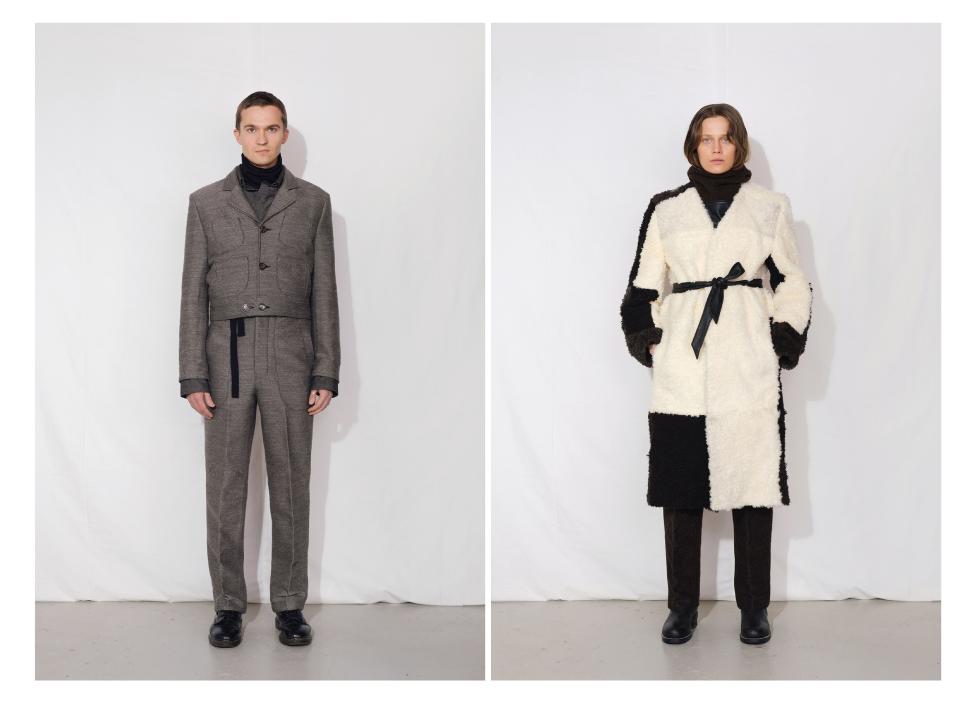 From Kruununhaka we steer further south to the heart of the city, to the district of Punavuori. It is the most densely populated district in Helsinki, housing the studios and showrooms of many designers. On Pursimiehenkatu, we find the showroom and store of By Hinders, designer Jonathan Ingberg’s design brand, which strives to create timeless and extremely environmentally friendly luxury products of high quality.

The pandemic brought the designer back to Finland after working abroad for several years. That’s when the idea was born to create something completely unique based on the Finnish culture and to create opportunities for cooperation with Finnish artesans.

In addition to the retail store in the city centre, the brand has a design and sewing studio on Ingberg’s parents’ farm in Inkoo. By Hinders embraces professionalism and high quality, and the earthy colour palette of their collections is spiced with the practical details of classic workwear. Through his work, Ingberg promotes the value of Finnish handicrafts and design in and outside Finland. 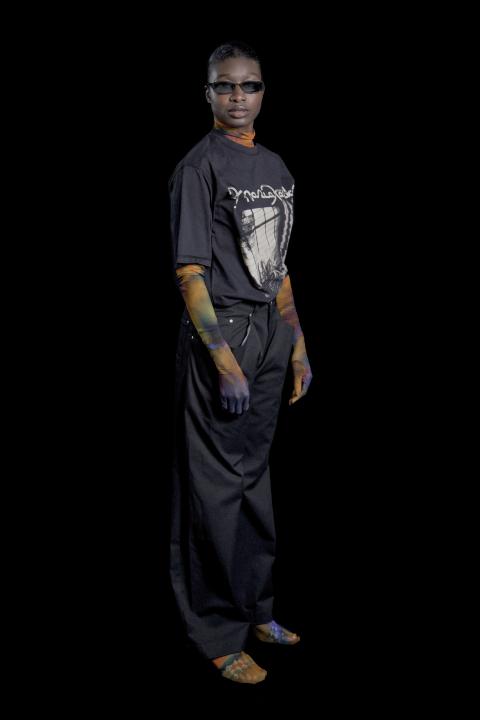 Two blocks north of Pursimiehenkatu, we find ourselves on Punavuorenkatu, where a small studio is run by designer Maria Korkeila known for her garden clothes collection designed for Fiskars. Carrying the designer’s name, the brand is a collection of clothing and accessories for those who are brave and have a sense of humour regardless of age and gender. Korkeila wants to present spectacular yet effortless and ethically manufactured products of high quality.

The decision to stay in Helsinki to develop a unique brand seemed right to Korkeila for several reasons. While working in Paris, she felt that her voice was drowning in the masses, and it was hard to see the big picture and stay rooted in one’s own thing. Korkeila says that in Finland she feels she’s able to focus. There are also good support networks and easier bureaucracy in Finland, which allows freedom to concentrate on the most important matters.

According to designers, Helsinki is a city suitable for slower, more concentrated creative work. Distance from the rest of the world can sometimes feel like a curse as major opportunities to showcase one’s work, larger clientele and other work prospects tend to concentrate in central Europe. However, listening to the new generation of designers, Helsinki is considered a protected city where one can develop one’s design process and focus on one’s values. Some years ago people rushed abroad in pursuit of fashion jobs, but in a few years Helsinki will perhaps be the city where designers stay or return to settle down and express their vision.

Ervin Latimer is a Helsinki-based fashion designer and creative director of Latimmier, a fashion label he founded in 2021. Alongside design work Latimer writesn and lectures on the intersections of queer-culture, anti-racism, masculinity and fashion.

This article is part of a series of designers talking about their Helsinki experience. In addition to MyHelsinki.fi, the articles are published at Helsinki Design Weekly.

Simple liftup
Sustainable and long-lasting purchases in Helsinki
Show image on the left
Off
Show created/updated
On
Show in search dropdown
Off
Teaser text
Now you can navigate Helsinki with a treasure map of fashion diamonds in the making.
Select any filter and click on Apply to see results