“There is still beauty beneath the surface”

Jirina Alanko
Lead text
Helsinkians like to enjoy the sea air in their free time, but for many of them the sea is also a colleague. Sometimes the sea is “safe like a carton of milk,” and at times unpredictable. Four maritime professionals share their stories about the sea as a workplace.

Most Helsinki residents are familiar with the feeling of a glimmering sea and warm rocks on a sunny day. The seaside city is also home to sea-related work, where no two days are alike. 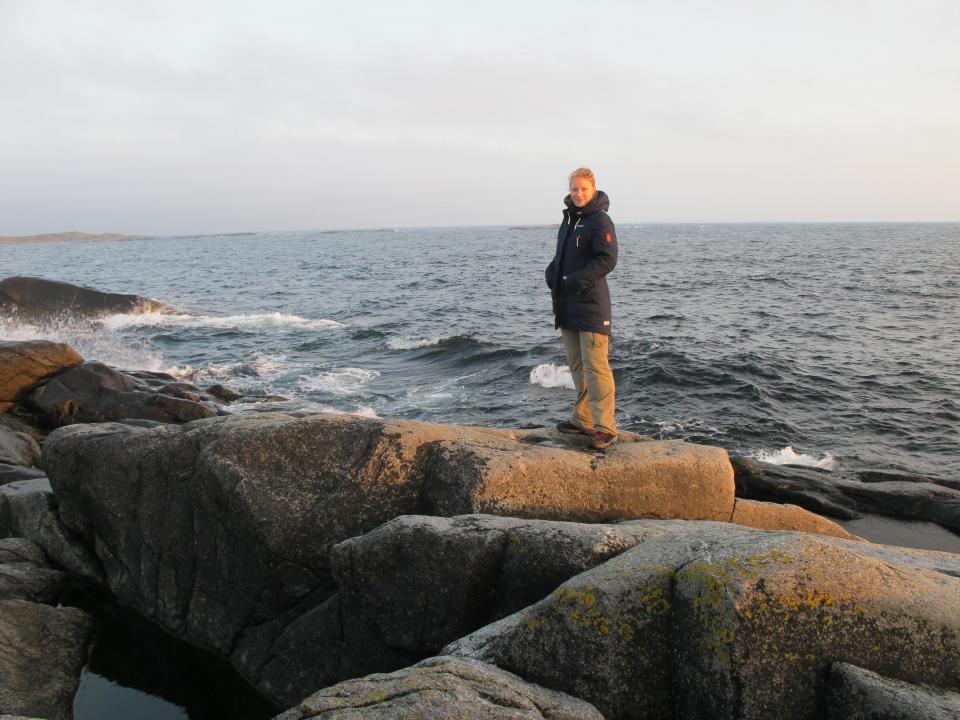 “The sea is a quiet meadow”

“There are plants growing underwater just as they do on land. I’m a maritime biologist and my work includes examining them. I collect aquatic plant samples from the Baltic Sea by diving. I do diving trips from May to September, typically around 20-40 trips per season. If there is a lot of work, I might end up diving underwater more than 100 times over the summer.

The sea was important to me from earliest childhood. I first visited the sea when I was two weeks old, as my family had a boat. I used to love spending time at the beach snorkelling when I was 8-10 years old. The green foliage at the bottom of the sea was already enchanting to me back then.

The sea is a calming workplace. Of course there are days when the weather is not at its finest, and instead is windy and cold. If I am coming back from many field days, I may feel like I am not up for it.

But in the end it almost always leaves me feeling good.

It is wonderful to see how the seagrass sways gently in the underwater currents. A meadow of seagrass resembles an overland meadow, and it has a calming effect on me.

The only sound I can hear is my own breathing through the scuba equipment.

The Baltic Sea is in a poor condition, but there is still a lot of beauty in the sea. One mustn’t give up hope. We need to work together in order to protect it.” 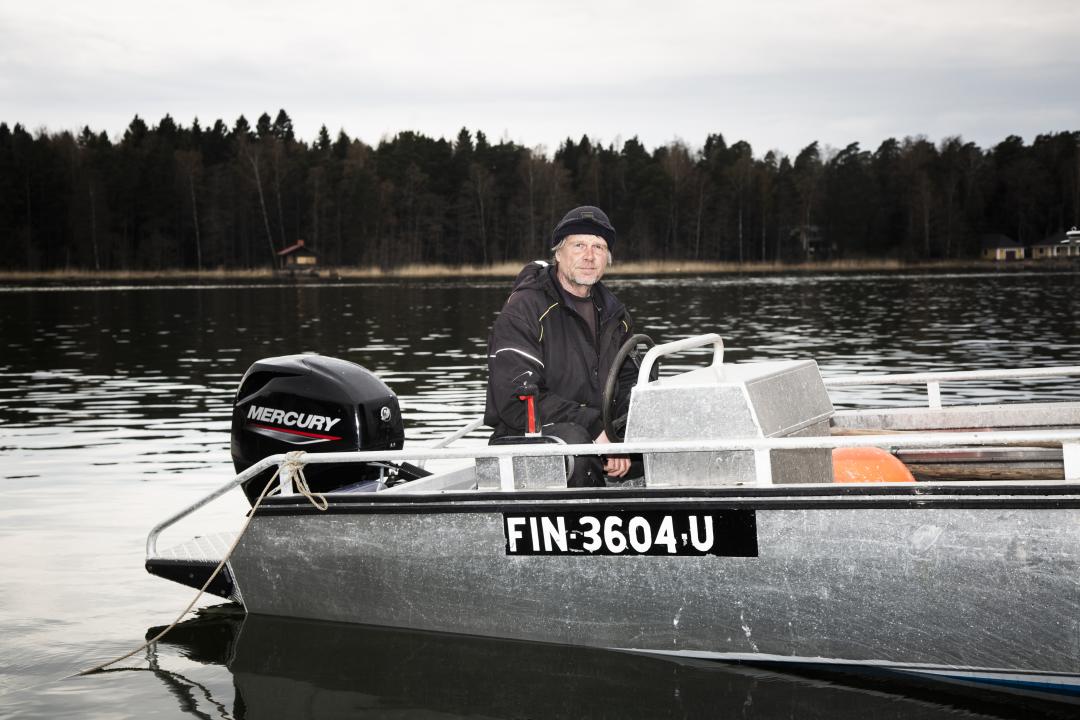 “A foggy sea feels safe like a carton of milk”

Fisherman Kai Ilves thinks that the sea is an unpredictable workplace.

“I’ve been a fisherman since I was six, and a professional one since the early 1990s. I went to the sea a lot in my youth with a war veteran and professional fisherman on Eestiluoto. That’s where I got the spark. I studied to be an engineer, but due to the depression and loss of jobs in the 90s, I changed careers and became a fisherman.

I fish for Baltic herring, sprat, whitefish, trout, and more on the eastern side of Helsinki — in Vuosaari, for example.

The sea is unpredictable, and as an element one could even call it nasty. I feel a great respect for the sea. When you are on a boat, you need only to trip on a piece of string. If you hit your head badly, it makes no difference whether you plunge into warm or cold water.

As a fishing ground, the sea is fascinating. A forest is visible to the eye, but the waters are more exciting because you can never know what lies beneath the surface. In order to find fish, you have to follow and monitor the weather, the direction of the wind, water currents, and the temperature.

The sea is almost always different. A summer’s day caressed by a tender south-southeast breeze is a boring one in terms of events. A sleet storm is the most fun type of weather. It is thrilling to see the windows of a vessel freeze over. The only thing you can then see with a searchlight are wet sneakers flying down from the sky.

In a dense fog, the sea feels safe like a carton of milk.” 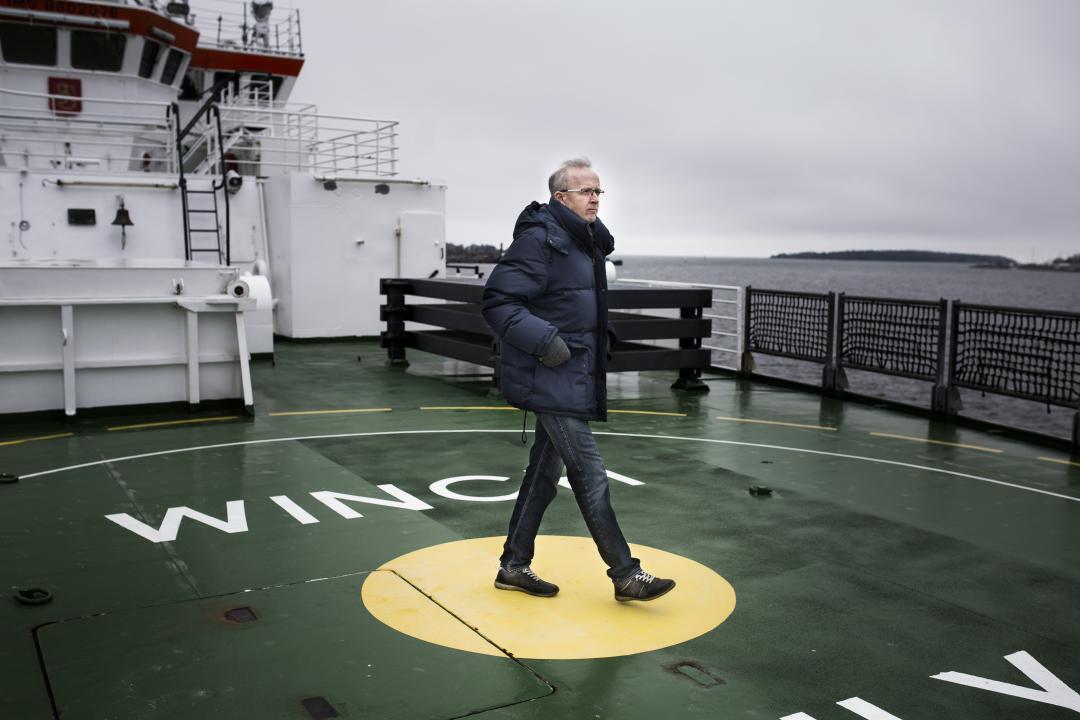 Baltic Sea researcher, Seppo Knuuttila feels that working with the sea is a privilege.

“I grew up on the Baltic Sea coast and have kept up with the state of the sea since I was a little boy. At first I took an interest in birds. In the 1970s, chemicals that ended up in the sea nearly drove sea eagles to extinction. This was a great concern to a young bird enthusiast, and it was a wake-up call for me to develop an interest in environmental topics. This led me to study limnology — or water protection — later on at university.

For me, working with the sea is a privilege. Very few people are able to have a profession which also addresses their private interests.

People tend to think that a sea researcher is always out sailing, out at sea. In reality, a great part of my work is about the long hours spent with studies, results, and publications on dry land. I do, however, also take part in expeditions on the Baltic Sea every year.

My research topic is the eutrophication of the Baltic Sea. Though a researcher needs to try to remain neutral, one cannot simply witness environmental deterioration with a blank face. The state of the Baltic Sea worries me – but there are also reasons for joy.

Fishing is a hobby of mine; I keep my nets behind Seurasaari Island in the wintertime. When I tell my international colleagues that I’m fishing right in central Helsinki, many ask whether the fish caught there is safe to eat. It is common to think that one can’t eat fish that has been caught close to populated areas. There is a general view that the waters in these areas are completely contaminated, and this was indeed the case in Finland just half a century ago. The water quality along the Helsinki shoreline has improved dramatically since those days —  this brings me great joy.” 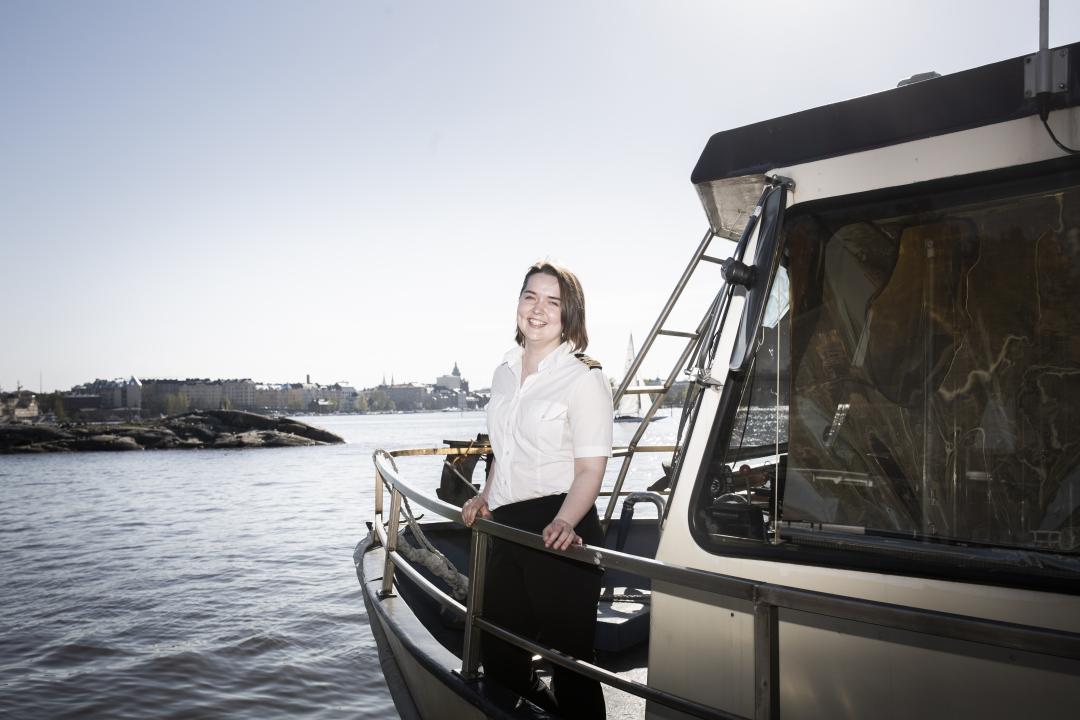 “No two days are similar at the sea”

Waterbus captain Linnea Keltanen is in charge of the ferry line between the Market Square and Korkeasaari Zoo.

“Very few people have a view from their office like the one I do. I work as the pilot and manager of the Korkeasaari Zoo waterbus, which in practice means that I steer the ferry from the Market Square to the zoo and take care of everything that it involves. As a manager, I have full responsibility over the vessel, such as its technical operability, navigation, and the safety of our passengers. The best thing about my job is the sea —  which is a unique and at times a challenging environment. There are literally never two identical days at sea, because the water changes so much depending on the will of the weather.

If your work is somehow related to the sea, at some point the pretty summer days stop being the most interesting ones. I love peculiar conditions —  like a fog —   which can envelop the whole sea incredibly fast in a certain type of weather.

Sometimes I miss the kind of sea that swirls all about  me in a terrible wind  —  you get to challenge yourself in just the right way. The route to Korkeasaari is short and sheltered, and there is no real danger, even when steering the boat in a storm.”

Rich card list
7 ways in which the sea benefits the mind and the body
Helsinki’s shoreline creates space for new ideas and peace of mind
Simple liftup
Seaside Helsinki
Show image on the left
Off
Show created/updated
On
Show in search dropdown
Off
Teaser text
Helsinkians like to enjoy the sea air in their free time, but for many of them the sea is also a colleague. Sometimes the sea is “safe like a carton of milk,” and at times unpredictable. Four maritime professionals share their stories about the sea as a workplace.
Select any filter and click on Apply to see results